Angular, sleek, iconic – the Hyundai Pony Coupe is as timeless today as it was when it was first unveiled in 1975. 46 years on, we’ve taken a first-generation Pony 4-door sedan apart and put it back together with all new technology, fittings and furnishings. Come on board the next generation Heritage-Series PONY with us.

The Hyundai Pony Coupe was conceived by legendary automobile designer Giorgetto Giugiaro back in the 1970s and was first presented at the Turin Motor Show in October 1974. With its geometric lines, wedge-style nose and circular headlamps it soon became an icon. Today, the Pony Coupe continues to delight classic car enthusiasts and is perhaps best known as the inspiration behind the legendary De Lorean DMC 12. 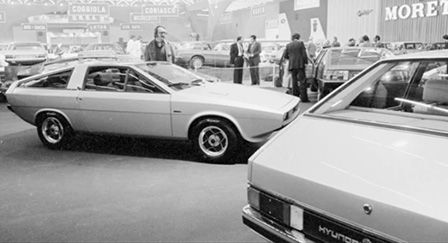 In December 1975, the Pony was introduced as a 4-door sedan, in May 1976 a pickup version was added, in April 1977 a station wagon, and in March 1980 a 3-door hatchback. Hyundai began exporting the Pony to Argentina, Colombia, Ecuador and Egypt from 1976 and sales in the United Kingdom began in January 1976, making it the first Korean car to be sold there. In 1978, it was also exported to Belgium, Greece and the Netherlands.

The Hyundai Pony was Korea’s first mass-produced and exported vehicle and today, it is remembered as a landmark car for Korea. For us at Hyundai, it is the car which propelled us onto the global stage.

Fast forward 46 years, and the Pony 3-door has been reimagined and reconstructed for the 21st century and beyond. Created for display in Hyundai’s recently opened Hyundai Motorstudio Busan in South Korea, the revived Heritage-Series PONY stands out for its iconic angular, retro silhouette and matt silver finish. It’s not just a testament to the creative spirit in Hyundai Design, it is also an homage to Giorgio Giugiaro as the car looks as fresh as it ever did, 46 years after its debut.

The electric transformation of the original 1975 Pony 3-door was led by Hyundai’s interior chief designer Hak Soo Ha. It is not simply a retro design "inspired" by the 1970s but is the real thing. The redesign involved taking an actual first-generation Pony 3-door car, meticulously disassembling it and rebuilding it with new technology and retro modern features.

Although the exterior design is old-school and the silhouette is unchanged from that of the original, the Heritage-Series PONY has been built on a new EV powertrain with added camera-based, fender-mounted exterior mirrors and pixelated headlights and taillights. Most notable perhaps is the speed gauging instrument panel which uses retro Nixie tubes - illuminated vacuum cylinders – which epitomize the height of 1970s style.

The Heritage-Series PONY also contains future-oriented elements like the digital touch transmission, cradle space for mobile phones and voice-activated steering wheel. And you can find a designated last-mile mobility device in the trunk.

The Pony is more than an iconic car for us. It was a defining influence on our 45, and our IONIQ 5 – the first car to be rolled out in our dedicated electric line. The Pony Coupe, 45 and IONIQ 5 were all designed to deliver breakthrough customer experiences. Where the Pony delivered style and convenience to a massive audience, our latest 45 and IONIQ 5 models update these qualities for the electric age.

It’s no coincidence then, that all three cars feature our signature ‘Parametric Pixels’ – a unique jewel-like design which incorporates pixels and eight-bit graphics into the lights. “The Pixel is a design signature from the original Pony, a timeless design that transcends generations and time, and is both analogue and digital,” says SangYup Lee, Vice President and Head of Hyundai Global Design Center. Thus, the new IONIQ 5 takes “both philosophical and visual inspiration from the Pony concept in order to create a bold new EV design that connects a common thread from past to present and future of Hyundai design,” he says. 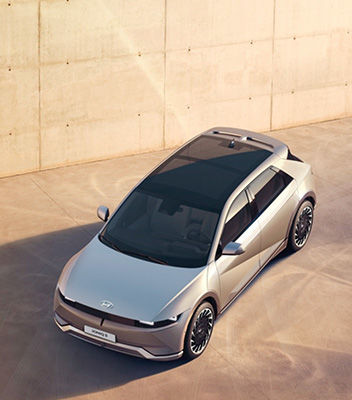 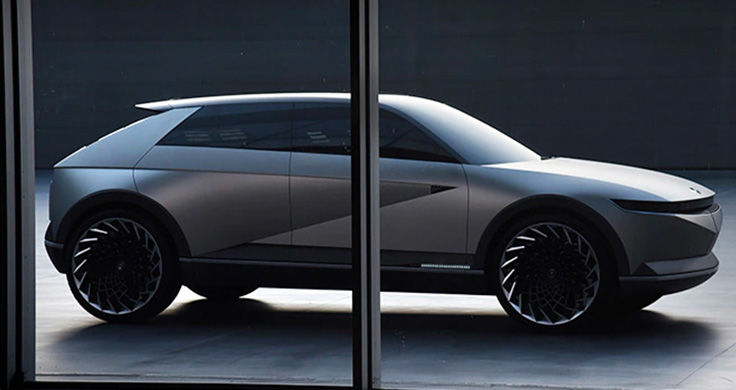 With the introduction of dedicated EV design of the IONIQ 5 we want to rekindle the pioneering spirit of the original Pony. SANGYUP LEE, VICE PRESIDENT AND HEAD OF HYUNDAI GLOBAL DESIGN CENTER

So, look out for our Parametric Pixels in the headlights and taillights of all IONIQ models and their designated charging points. Our new pixel design will serve as the signature of the IONIQ brand well into the future.

The Heritage-Series PONY will be on display at the Hyundai Motor Studio in Busan until June 27, 2021. And the IONIQ 5 will be available this fall! Find out more about our next generation of electric cars by following @hyundai_worldwide .

HERITAGE An icon from the past