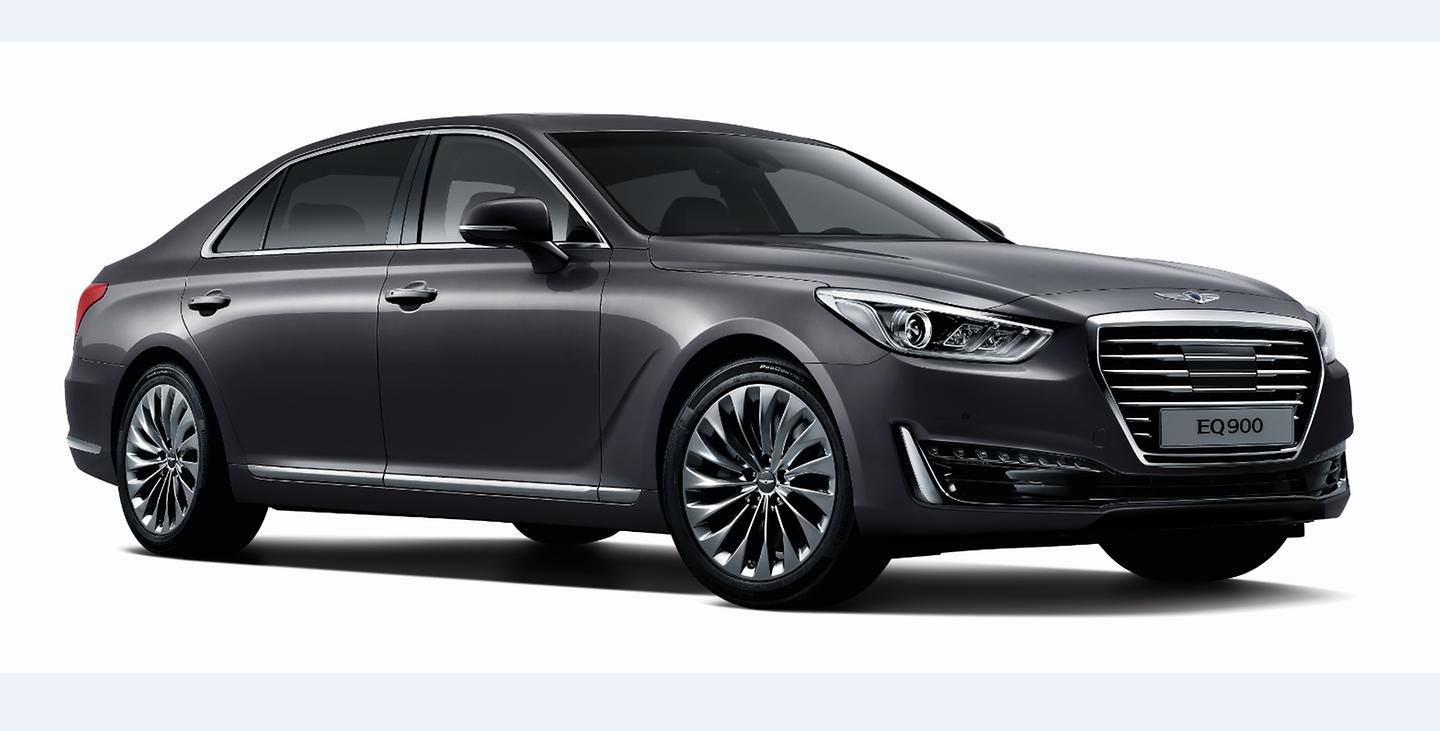 - Host of world-best safety and technological innovations realized in G90

December 9, 2015 – Hyundai Motor has unveiled the new Genesis G90 large luxury sedan, the model that will top the new Genesis brand’s luxury car line-up. The G90 (called EQ900 in Korea) will compete at the top of the luxury car market with world-best technological innovations and the highest levels of refinement, convenience and dynamic performance.

Designed with profound elegance, natural dignity and grandeur by the Prestige Design Division that will craft the visual identity of each Genesis model, the G90 is the first realization of the brand’s ‘Athletic Elegance’ design style. Outside, the G90’s silhouette is powerful and refined, from its long hood to its sophisticated rear. While inside, the finest artisan materials meet human-centered ergonomics to provide occupants with absolute convenience and luxurious comfort.

Human-centered Technological Innovation
With technological innovation at its core and in anticipation of fully-autonomous cars, G90 features Genesis Smart Sense, which brings together advanced systems including Genesis’ advanced ‘Highway Driving Assistance’ (Korean market only), Advanced Smart Cruise Control and Lane Keeping Assistance System. Accentuating the customer-oriented approach of Genesis, the system substantially reduces driver fatigue by combining a series of innovative technologies. This combination of newly-developed technologies create a first-class, all-but autonomous driving experience, elevating the G90 to the top of its class.

Best-in-class Luxury Refinement
Benefitting from an intensive four-year development program by an 800-strong team, the G90 has best-in-class refinement thanks to extensive work on the car’s NVH characteristics. Every detail of the interior has been crafted to continue the car’s human focus.

Advanced ergonomics analysis dictates the positioning of driver controls and the passenger comfort and entertainment features, while materials are sourced from the finest artisans around the world. Ride comfort and road holding is optimized by combining an advanced H-TRAC all-wheel-drive system with the first application of Genesis Adaptive Control Suspension.

Sporty Agility with Refined Performance
Driving the car, owners will notice standards of refined performance. This is central to the Genesis brand’s character, with development teams carrying out rigorous performance testing of the G90 at the Nürburgring circuit in Germany and the Mojave test center in the U.S. Despite the car’s sporty and responsive characteristics, the interior environment remains refined with all of the three available gasoline powertrains: V6 3.3-liter T-GDI, V6 3.8-liter GDI or V8 5.0-liter GDI.

The newly introduced G90 in Korea will be rolling out to other markets, including United States, China, Russia and countries in the Middle East. A further five Genesis models will be launched over the next five years.


01 Styling
Athletic Elegance in design that exudes confidence and originality

Note - Product specifications and options available may vary by region

Formed by Hyundai Motor’s new Prestige Design Division, the distinctive appearance of the G90 exudes confidence and originality. Under the oversight of Chief Design Officer Peter Schreyer, G90 expresses the first interpretation of the brand’s hallmark design style ‘Athletic Elegance,’ which harmonizes beauty and elegance of movement with dynamism and an explosion of energy.

Exterior Design
The exterior design of the car brings a respect and depth of grace to the sector, a natural dignity of “Soignee Charisma” evident when parked or in motion. In crafting the appearance of G90, the Prestige Design Division aimed to capture the car’s strength and originality, while presenting a new charm through its innovative styling and proportions.

At the front, the G90’s identity is centered around a Genesis-family styling feature, the ‘CREST’ grille, and crowned with the new winged-feathers of the Genesis emblem. Powerfully-proportioned, the G90 combines a long hood with short overhangs, a design feature that accentuates the model’s strength. The sharp LED headlamps flow around the front corners of the car’s bonnet – a key feature of the new family of Genesis-brand cars.

Occupying one of the most substantial footprints in its class, the G90 is available in eight sophisticated colors that pick-out the car’s characteristic lines. Ranging from Marble White and Onyx Black to Gold Scent and Neptune Blue, the color palette perfectly matches the spectrum of interior color and material combinations.

Interior Design
Human-centered ergonomics, total interior harmony, absolute convenience and luxurious comfort dictate the interior layout and design “Graceful Luxury” of the G90. From the graceful layout of driver controls and authentic material to the seat stitching and elegant color palette, every element of the car’s interior reinforces the focus on the car’s occupants.

Great consideration has been given to each of the materials chosen for the G90’s interior. The highest-quality, authentic materials adorn the cockpit with ease of use and beauty of appearance central to every feature’s form and function. In collaboration with prominent Italian leather supplier Concerio Pasubio SPA, Hyundai Motor specially-developed semi-aniline leather for the seats of G90 Limousine. Throughout the cabin, the latest technologies sit among Nappa leather and glossy real wood, delighting the senses and cosseting the occupant in a first-class environment.

A characteristic of all Genesis models will be the melding of sporty agility and refined performance. Sitting at the pinnacle of the Genesis range, the G90 captures this spirit perfectly thanks to an extensive research, development and testing regime.

The G90’s engineers worked closely with Hyundai’s European Test Centre based at Germany’s demanding Nürburgring circuit, and also put the car through its paces at Hyundai’s test center at Mojave in the Unites States. Through an intensive program of testing and development, the engineering team refined G90’s ride, handling, steering input, suspension movement and interior environment to deliver an impeccable and exhilarating driving experience with dynamics that are luxurious, sporty and refined.

‘Safety without compromise’ summarizes the human-centered philosophy that has directed the development of the G90. The introduction of several world-best safety technologies, alongside a highly rigid body frame (the strongest in its class), means the G90 boasts safety as one of its stand-out features.

Adding to the car’s no-expense-spared safety set-up, a selection of other technologies work to minimize risk and maximize protection for the driver, passenger and other road users. From Autonomous Emergency Braking (AEB) with Pedestrian Detection, Active Blind Spot Detection (BSD) and Driver Attention Alert, to Smart High Beam Assist and an Around View Monitor, the human-centered nature of Genesis is evident throughout.

Simplicity and intuitiveness were key to the development of the G90’s convenience features, delivering the ultimate hassle-free experience for owners. Also, in developing the car’s specification and equipment, great thought was put in to providing everything a customer would need without anything unnecessary or over complicated.

Seating comfort is an outstanding characteristic of the G90, with engineers creating the world’s first Smart Posture Caring (SPC) System to ensure total luxury for the driver and passengers. The innovative ergo seating system automatically determines the optimal position for the driver’s body, ensuring minimal stresses even on longer journeys.

The G90’s electronically-controlled driver’s seat feature 22 ranges of adjustment and have been approved by German campaign for healthier backs, Aktion Gesunder Rücken. The VIP passenger seats are electronically adjustable in 14 different ways, ensuring the highest levels of comfort.

Many of the car’s features rely on interaction with the car’s audio visual system displayed via a luxurious 12.3-inch High Definition wide screen sited in the center console. The screen plays a key role in enhancing the ease of parking and in-city maneuvers for drivers. A one mega pixel digital camera is activated when parking, sharing the screen with a high-resolution 360-degree Around View Monitor.

Quality was also fundamental to the appointment of G90’s audio system. Presenting a concert hall-like experience, the Lexicon Sound System boasts Quantum Logic surround sound, while the car’s Clari-fi software rebuilds details lost in compressed audio files, adjusting the treatment based on the quality of the audio signal to restore a hi-fidelity listening experience.

Elsewhere in the well-appointed cabin, air conditioning is divided into three separately-controlled zones, and occupants can charge their cell phones using the latest in wireless charging technology.

Engineers set NVH as a key differentiator for G90, dedicating hundreds of hours to fine tuning every aspect of noise reduction and comfort enhancement. This obsessive attention to detail has resulted in the Genesis G90 boasting best-in-class ratings for in-cabin quietness, a major achievement in this highly competitive area of the luxury car market.

From introducing special sound-absorbing materials throughout the cabin and sub-structure of the car to the application of laminated glass on each window, the focus on providing customers with the ultimate luxury experience was the key. The determination to minimize generation of additional tire noise even extended to the special hollow design of the G90’s 19-inch alloy wheels with engineers altering the structure to channel the flow of air in a quieter way.

Sound engineering also extends to the sedan’s suspension set-up, which is optimized at test centers around the world for high speed cruising while minimizing in-cabin impact and body vibration.

Tuned for maximizing driving pleasure, the rigorous testing regime concentrated on getting a responsive drive from the car’s powertrains, while remaining refined for drivers and passengers.

The 425PS V8 unit can propel the sedan from 0-100kph in as little as 5.7 seconds, fueled by powerful torque of 53.0kgf.m. Meanwhile, Hyundai Motor’s first twin-turbocharged engine, the 3.3l V6, boasts strong performance throughout the rev-range, capable of 80-120kph overtaking maneuverers in 13.0 seconds thanks to its 52.0kgf.m of torque.

* Figures stated are manufacturer’s estimates for the Korean market, specification in other markets may vary. 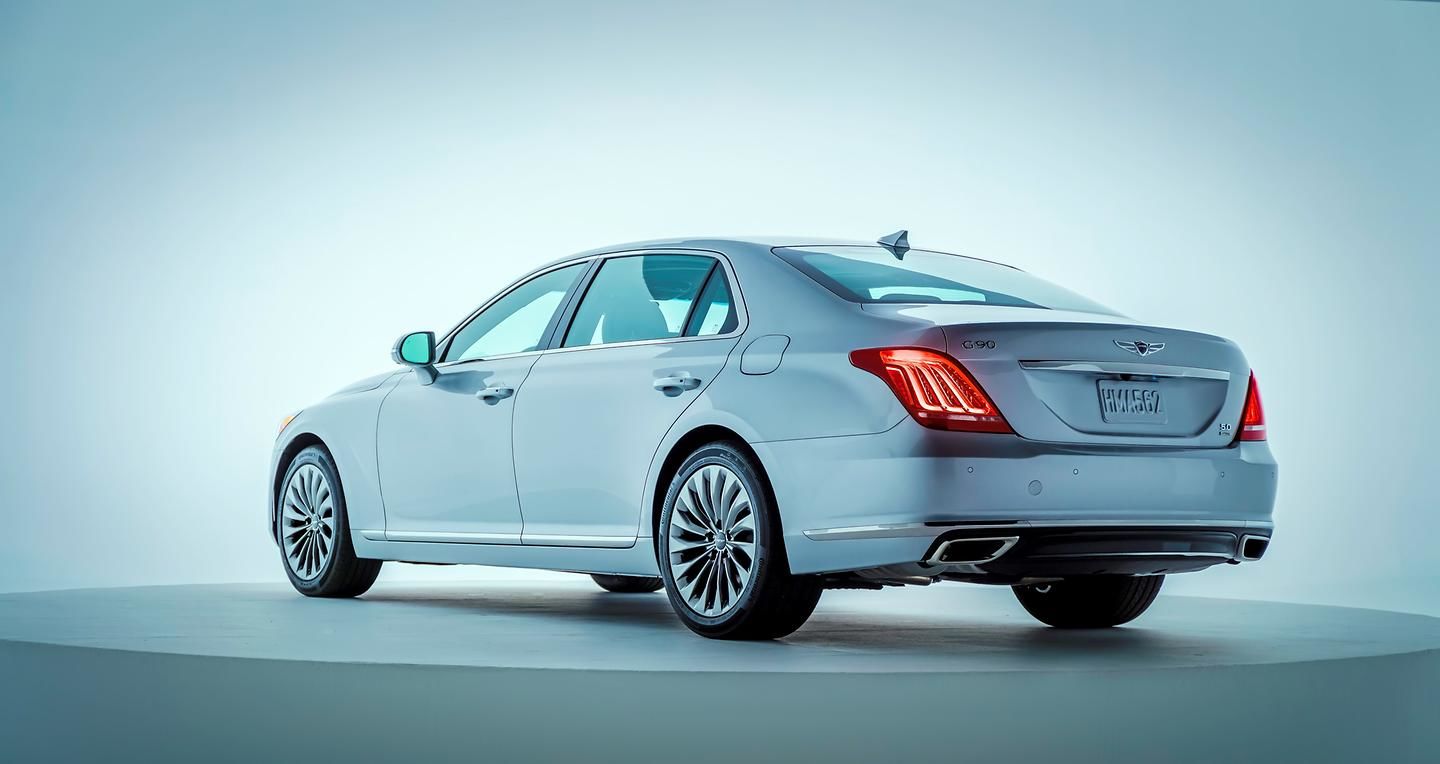 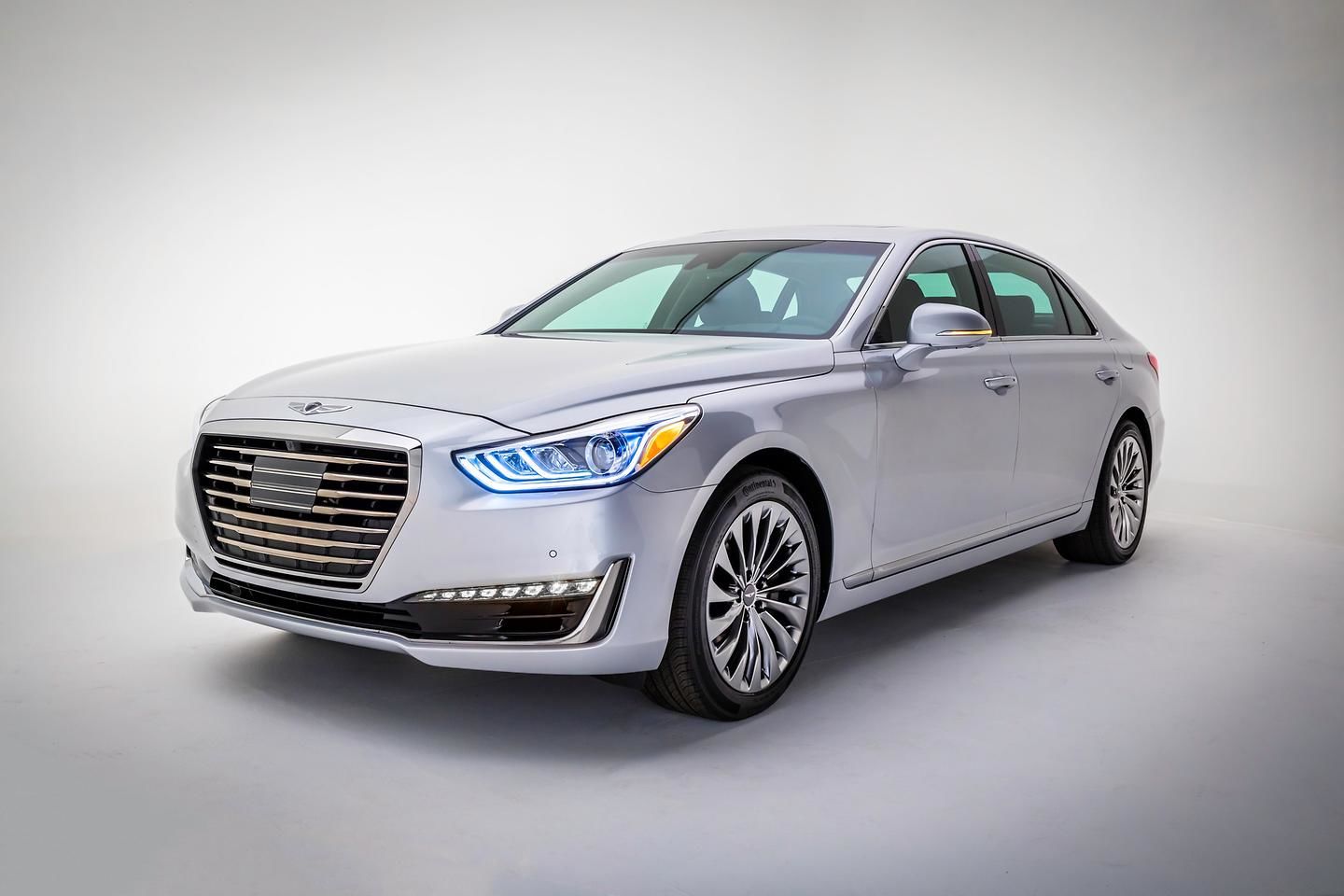 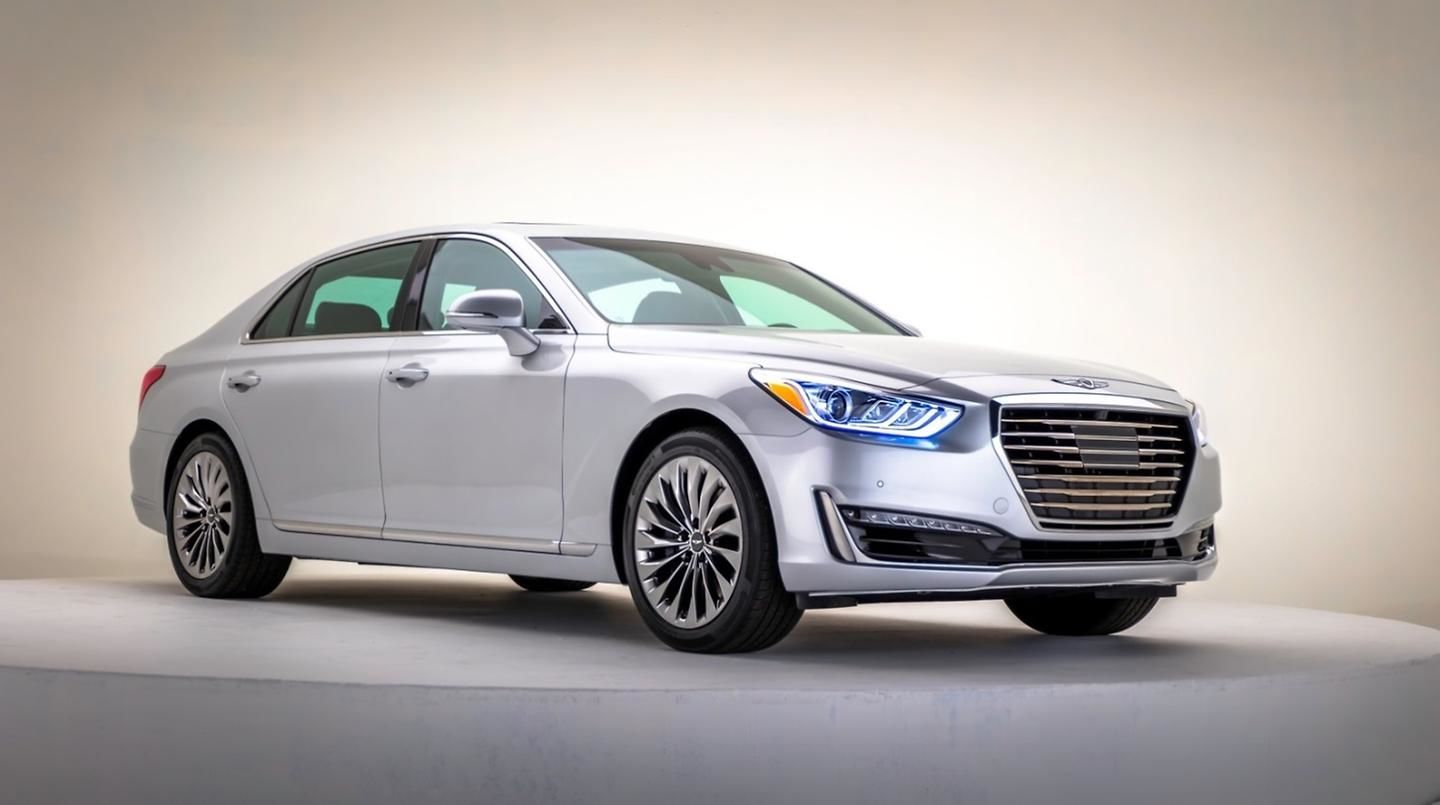