SEOUL -- Hyundai Motor Company will display its growing brand status on a grand scale in two more of the world’s most popular tourist destinations, as large-scale lighted signs switch on in London’s Piccadilly Circus and Hong Kong’s Victoria Harbor today.

The 116-square-meter ad space in Piccadilly Circus -- held by Sanyo since 1978 -- is estimated to be seen by over 56 million people every year. It will feature ad content created specifically for the local market.

In Hong Kong, the 460-square-meter lighted Hyundai ad will appear on the Revenue Tower skyscraper, near a site that hosts 6.2 million visitors per year, many of whom attend the nightly “Symphony of Lights” sound and light show.

“We are excited to show the Hyundai brand in three of the world’s great cities, on three different continents,” said Seung-Tack Kim, Hyundai Motor executive vice president for global business planning. “Piccadilly Circus, Victoria Harbor and Times Square are truly at the center of today’s action, and so is Hyundai.”

“Only 50 brands have advertised in Piccadilly over its 100-year history and adding Hyundai to that list shows just how far the brand has come in recent years,” said Tony Whitehorn, Hyundai Motor U.K. managing director. “It represents a significant investment for Hyundai and highlights just how important the U.K. is to our business.”

The new London Hyundai sign marks the end of an era as it replaces the only remaining neon billboard in Piccadilly Circus, a tradition that began more than 100 years ago. The high-resolution LED lights can use up to 90 percent less electricity than neon.

The LED signs allow Hyundai the flexibility to display a variety of creative content.

Established in 1967, Hyundai Motor Co. has grown into the Hyundai Motor Group which has ranked as the world’s fifth-largest automaker since 2007 and includes more than two dozen auto-related subsidiaries and affiliates. Hyundai Motor, which has six manufacturing bases outside of South Korea, sold approximately 3.6 million vehicles globally in 2010. Hyundai vehicles are sold in 186 countries through some 5,300 dealerships and showrooms. Further information about Hyundai Motor and its products is available at www.hyundai.com 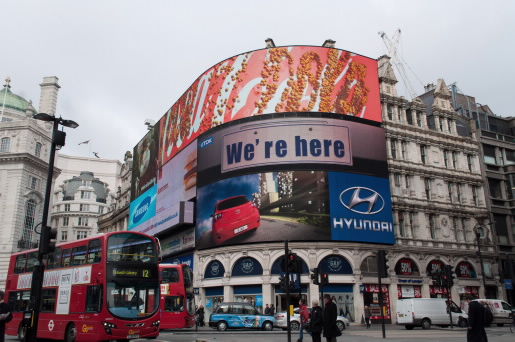