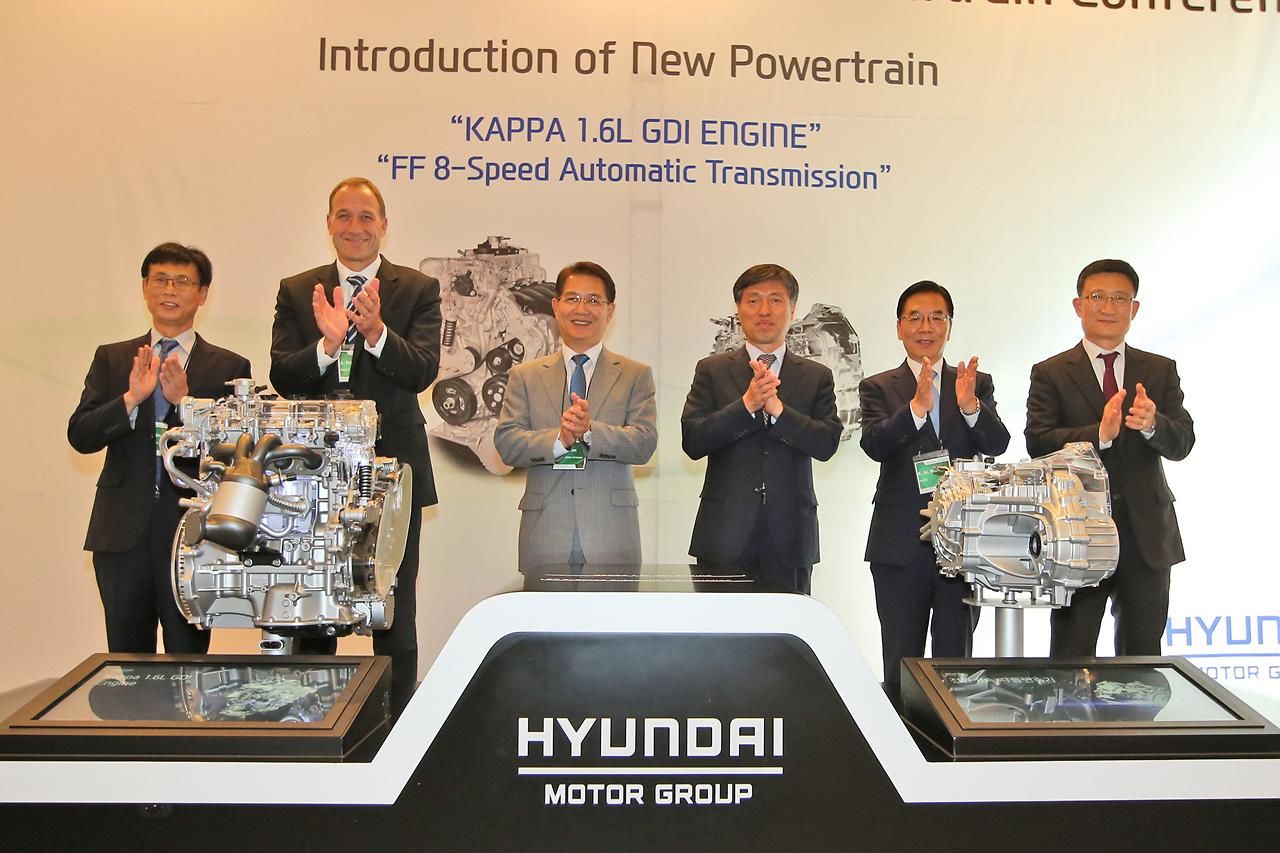 The EGR system applied to the engine helps to recirculate exhaust gases back into the cylinder and burns them again. The new Kappa HEV engine alone delivers a 3% gain in fuel economy through three stages: gas extracted upstream ensures more than 20% EGR rate, the EGR cooler delivers a cooling efficiency of 98% and the single stage gear EGR valve results in a 56.9 millisecond response time. A specially designed straight intake port increases the tumble flow of the EGR gas to allow fast combustion to further aid economy and boost power output.

The integration of technologies achieves a new engine thermal efficiency from 30% (of any typical engine) to 40% and secures competitive performance. The new unit produces 105 PS (77.2 kW), 15.0 kgf.m (147 Nm) and will be fit for future hybrid models.

The new front-wheel drive 8-speed automatic transmission has improved fuel economy by an impressive 7.3% when compared with the existing 6-speed automatic transmission unit. Coupled with better driveability and smoothness of the wider gear span, Hyundai Motor will present a powerful new option with its Lambda, Theta turbo GDI, and R family engines, targeting the large and luxury car segments.

The unit’s gains in economy and performance come from several sources including a direct control valve body that allows solenoid control of the clutch directly rather than via several valves. By simplifying the structure of the valve body, the new transmission reduces oil leakage and improves the stability of gear shifting.

Other optimized parts include a re-engineered oil pump. This integral component may reduce the power of most auto transmissions, so the company improved efficiency of the 8-speed automatic transmission by optimizing the teeth and reducing the size of the pump gearing.

The transmission’s damper control multi-disc torque converter is another key technology that enhances fuel economy and drivability. A separate system to control the 4-disc damper clutch, instead of a single disc, allows the enlargement of the lock-up range and faster response for damper control.

The new transmission also features a three-pronged approach to friction loss, ultimately boosting economy. The groove patterns are engineered to optimize the clutch for low drag, while a refined baffle plate minimizes the churning losses of transmission oil. Finally, demonstrating the attention to detail in engineering, the ball bearing contact areas have been reduced between rolling elements to help boost the powertrain’s efficiency.

About Hyundai Motor
Established in 1967, Hyundai Motor Company is committed to becoming a lifetime partner in automobiles and beyond. The company leads the Hyundai Motor Group, an innovative business structure capable of circulating resources from molten iron to finished cars. Hyundai Motor has eight manufacturing bases and seven design & technical centres worldwide and in 2014 sold 4.96 million vehicles globally. With almost 100,000 employees worldwide, Hyundai Motor continues to enhance its product line-up with localised models and strives to strengthen its leadership in clean technology, starting with the world’s first mass-produced hydrogen-powered vehicle, ix35 Fuel Cell.
More information about Hyundai Motor and its products can be found at:
http://worldwide.hyundai.com or www.hyundaiglobalnews.com

Further information about Hyundai Motor’s global art initiative and its various activities is available at http://brand.hyundai.com