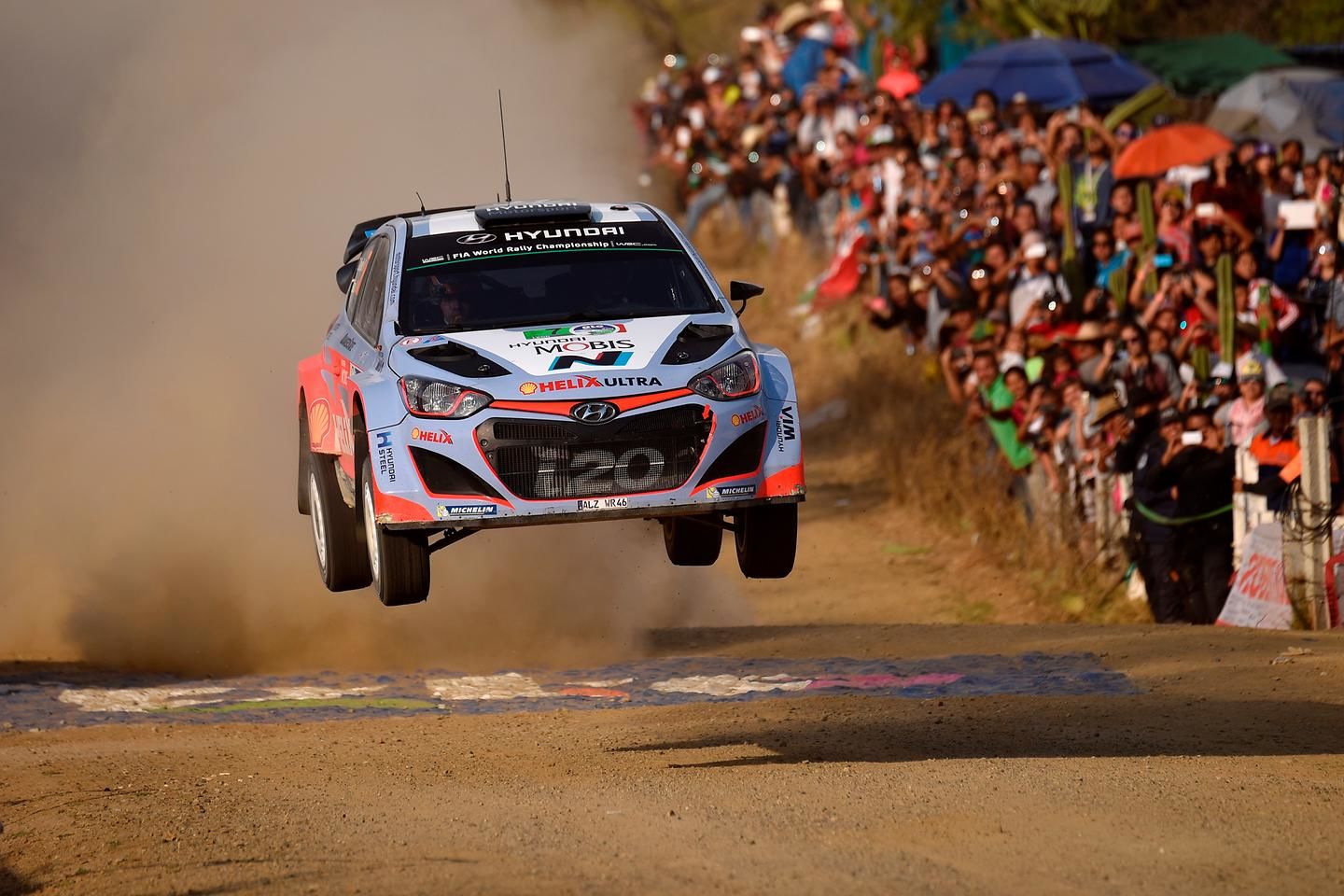 • Hayden Paddon concluded a valuable learning weekend with noticeable improvements during his first ever Rally Mexico round 3 of the 2015 FIA World Rally Championship (WRC).

March 8, 2015 - Hyundai Motorsport has brought an action-packed Rally Mexico to a positive conclusion as all three Hyundai i20 WRC cars finished the gruelling 21-stage event, successfully tackling some of the season’s most demanding stages in the process.

Dani Sordo (#8 Hyundai i20 WRC) battled through the pain barrier on Sunday to secure a satisfying fifth-place finish, scoring valuable Manufacturer points to help Hyundai Motorsport keep its second place in the standings.

The Spaniard, who was forced to miss Rally Sweden after sustaining injuries in a pre-event training accident, returned to rally action for one of the season’s physically most demanding events. Alongside co-driver Marc Martí, Sordo put in a heroic performance, claiming a stage win in Saturday’s SS13 (El Brinco) and scoring his best result of the season to date.

Sordo quote: “I have really enjoyed this weekend and being back with the team. I have felt at ease with the car this weekend and the performance was competitive on most of the stages. We were able to set some good times, including a stage win on Saturday, but we also had a few issues to contend with along the way – which is quite normal in this tough rally. Physically, I have felt ok most of the time but I started to feel some pain after the long Guanajuatito stage this morning. To come away from this rally with a top-five result is very good, and great that we have been able to add some important points for the Manufacturers’ Championship. I look forward to building on this for Argentina.”

Thierry Neuville (#7 Hyundai i20 WRC) and Hayden Paddon (#20 Hyundai i20 WRC) both made the most of their Saturday morning restart under Rally 2 conditions to complete the event with no further issues.

Neuville, who was one of the fastest men on the opening day with two stage wins, fought back superbly from his Friday roll, to claim eighth place overall. He put in a particularly eye-catching performance in Sunday’s monster 55.82km Guanajuatito stage, the longest stage of the rally. He then took a stage win in the SS20 Derramadero stage before finishing third in the final El Brinco stage to take an important Power Stage point.

Neuville commented: “Our objective today was to push to the maximum in the final stages. The long Guanajuatito stage was perfect; we had to manage the brakes but I took the jump flat out at 190kph and we set a good time. We then took a great stage win and third in the Power Stage to finish in eighth overall, so I am happy. The car has been competitive this weekend so it is a shame that the roll we had on Friday prevented us from capitalising on that. Nonetheless, the team has done a good job this weekend so it has been important for us to salvage some points today. Our stage wins on Friday and today, and strong performances in other stages, show what our potential was this weekend. Still, it is good for us to have a three car finish and keep our second place in the Championship considering the demands of this rally.”

Hayden Paddon (#20 Hyundai i20 WRC) and co-driver John Kennard have been on the back foot ever since a small off during Friday’s El Chocolate stage forced them to retire and re-join under Rally 2. The Kiwi crew were then first on the road on Saturday, which hampered any progress, but they made a clear step forward on Sunday as they improved their feeling in the car on Mexico’s unique stages.

Paddon said: “It’s been an eventful rally for us but I think there are plenty of positive things for us to take away. The car has been good. Coming into today’s final stages, I watched the on-boards from my team-mates last night and I learned a few valuable things about my driving which I can now take forward to Argentina. The final stage today pretty much summed up the weekend for us after I was caught out under braking early on in the stage, but we have still got lots of mileage this weekend and built up a good bank of experience in these stages, which was the main target, so I’m reasonably happy.”

Hyundai Motorsport continues to hold second place in the Manufacturers’ Championship following a determined and professional performance in Rally Mexico. Four stage wins and a Power Stage point gives the team a lot of encouragement heading to the next event in Rally Argentina, but everyone is aware of the work still required to keep up the pace with the front-runners.

Team Principal Michel Nandan said: “All in all, it has been a busy and gruelling rally but the team has worked exceptionally well to cope with the tough conditions we have faced in Mexico. The performance of the Hyundai i20 WRC cars met our expectations for this event, where the high altitude can really affect the car’s behaviour; I am satisfied that our hard work in this area paid off. Dani did a good job in his first rally back from injury and showed a real determination to perform at the highest level. Fifth place is a good result and, with Thierry in eighth, gives us more Manufacturer Points. Thierry set some strong stage times this weekend, and this was perfectly highlighted with third in the Power Stage. The puncture and subsequent roll on Friday stopped him from mounting a podium challenge this weekend. Hayden, too, was unfortunate on Friday and was hurt by an early road position on Saturday. He showed the usual professionalism and fight, making a breakthrough in today’s final stages. We have a lot to be happy with, a lot still to work on but we hope that Rally Argentina will show another improvement in our overall team performance against tough opposition.”