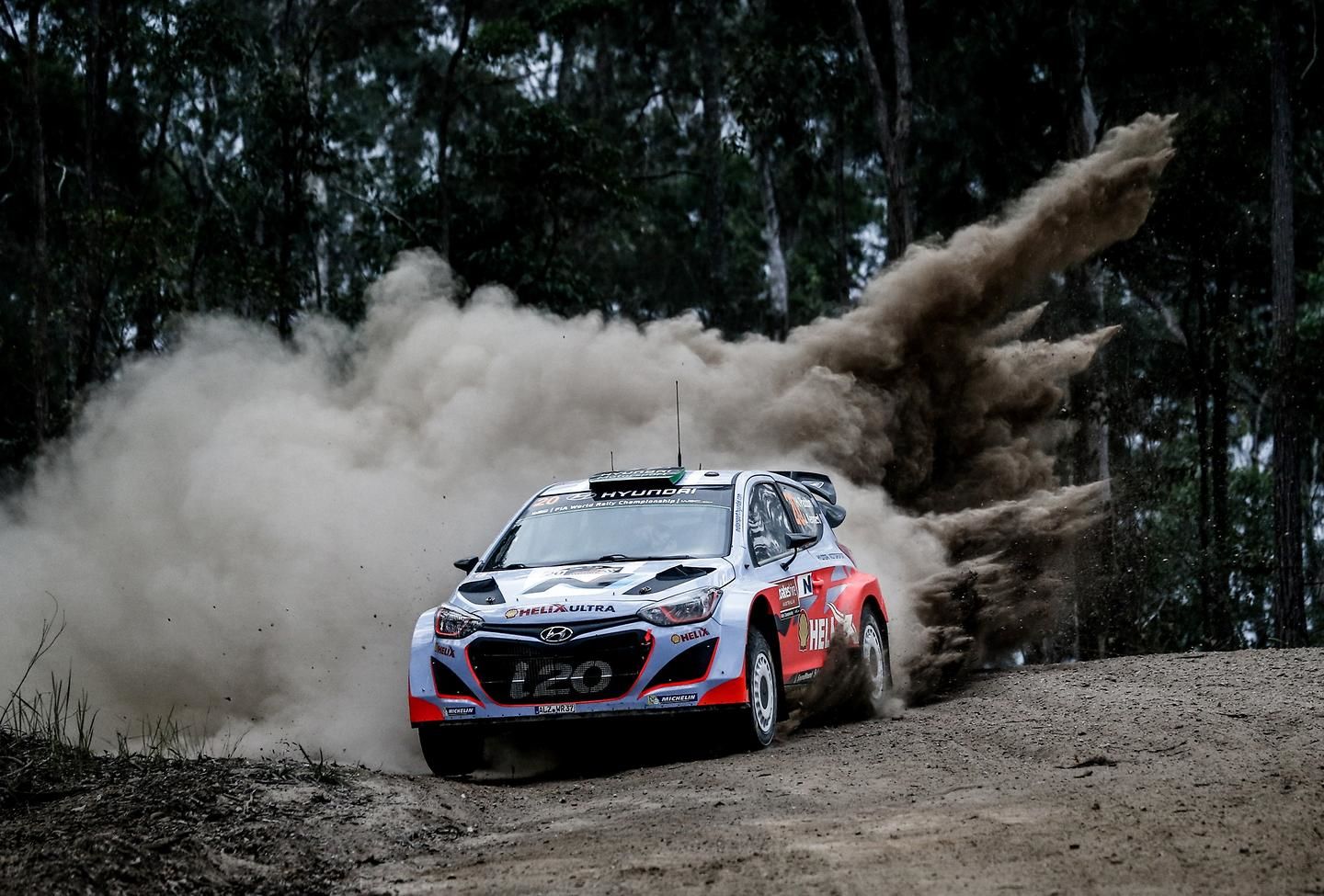 - Thierry Neuville and Hayden Paddon will line up in the Hyundai Shell World Rally Team for this event, driving the #7 and #8 Hyundai i20 WRC cars, respectively


September 4, 2015 - Hyundai Motorsport aims to consolidate its second place in the Manufacturers’ standings as the team prepares Rally Australia starting from September 10 to 13. The team will revert to a three-car entry for this rally as it looks to continue the momentum from its fourth and fifth place result at Rallye Deutschland last month.

Thierry Neuville (#7 Hyundai i20 WRC) will once again represent Hyundai Shell World Rally Team, joined by Hayden Paddon, the New Zealander who will take the helm of the #8 Hyundai i20 WRC for this event. Dani Sordo will take control of the #20 car for the Hyundai Mobis World Rally Team with the objective of building up his experience in the 17-stage gravel event in Australia.

Hyundai Motorsport will use its experience from last year’s Rally Australia to hone the best set-up for the Hyundai i20 WRC, while tire selection will also be a crucial element of the event.

Team Principal Michel Nandan said: “We are looking forward to continuing our recent strong performances as we visit Australia once again. We will be using our experience from last year and the recent upgrades to the Hyundai i20 WRC to see how competitive we can be. We have made some slight changes to our driver line-up for this rally. Dani hasn’t competed in the Coffs Harbour iteration of Rally Australia before. Thus, in order for us to score as many manufacturer points as possible in our fight for second place, we have moved Hayden, with his experience of the Australian gravel roads, into the #8 car and Dani will drive the #20 just for this event."

Thierry Neuville (#7 Hyundai i20 WRC) has built up a good rhythm as the 2015 WRC season has progressed. He recently claimed fifth place overall at Rallye Deutschland last month. The Belgian, alongside co-driver Nicolas Gilsoul, will be aiming to collect another good haul of Manufacturers’ points in Australia.

Neuville said: “Australia is where we can compare a bit with Sardinia in Italy and other European gravel rallies. However, this is a special event because it is far from our home in Alzenau, Germany and everything is more difficult to get just right. The conditions are usually very dry and there is also a lot of fog and dust, so it can be a tricky rally to drive. We have shown good pace in recent rallies so we have to build on this progress and continue to accumulate as many championship points for Hyundai Motorsport as possible.”

Hayden Paddon (#8 Hyundai i20 WRC) will have a lot of support from the New Zealand fans this weekend, and has set himself high targets for the weekend ahead. Following a valuable learning experience in Germany, Paddon and his co-driver John Kennard are excited to return to familiar terrain of Australia.

Paddon said: “I think that Rally Australia has been one of the rallies that I’ve been most looking forward to all year. I have been preparing for it over the past three or four rallies. Yes, there will be some pressure on me nearby my hometown, but I think most of it is going to come from myself because I really want to perform there and really want to see if we can be up on the podium again with the Hyundai i20 WRC. I will have the same approach as always, but this time, I will be happy to challenge for points that can help the team in the Manufacturers’ standings.”

Dani Sordo (#20 Hyundai i20 WRC) and co-driver Marc Martí will use this rally to acquaint themselves at which they have never previously competed. They have performed well recently, finishing in a fine fourth place in Germany.

Sordo said: “I have been to Australia before joining Hyundai Motorsport, and I have some good memories from there. I can’t tell you a lot of things about the Coffs Harbour-based event though, as I haven’t done it before, so it is completely new for me. I hear that it is very slippery along with that it has some very fast sections, and is very flat. I will work on the route a bit and check out the rally in advance. I look forward to discovering the stages around Coffs Harbour and to getting a feeling for this event. I will do my best, like I do at every rally.”

Coffs Harbour, located between Sydney and Brisbane along the New South Wales cost, will once again host the service area for Rally Australia. The 17 stages consist of sheltered forest roads and open country tracks, where Hyundai Motorsport can perform fast and flowing twists that make for an exciting challenge.