Hyundai has today revealed the first photo of the all-new concept car i-flow (HED-7), ahead of its international debut at the Geneva Motor Show next week.  The i-flow, which advances the ‘fluidic sculpture’ form language of Hyundai, will be joined on stage by other newcomers, including the facelifted i30 – to be launched as i30U – and a number of new, production-ready derivatives with CO2 emissions below 100g/km.

Previewing a future D-segment contender from Hyundai, i-flow boasts sleek, elegant lines which not only create a bionic, futuristic shape, but also contribute to exceptional aerodynamics.  The drag coefficient of 0.25Cd helps to reduce the car’s CO2 output to just 85g/km and fuel consumption to only 3l/100km.

Hyundai’s first diesel-electric hybrid powertrain is a key factor in delivering such an environmentally-conscious return.  The exciting new U2 1,7-liter engine is augmented by two-stage turbocharging and Hyundai’s Lithium Ion-Polymer battery, to give a very efficient and advanced combination, partnered with a six-speed, dual-clutch transmission.

The interior of i-flow redefines the perception of space in a sedan bodystyle, and sees the application of next-generation materials and technologies developed in cooperation with leading chemical company BASF.  Fundamental elements, such as the seats and center console, have been crafted in collaboration with BASF for minimal weight and volume.  The cockpit’s main interface centers around an expansive, contoured screen, which recognizes not only touch but also gestural inputs along its fascia-wide display.

The glossy ‘Liquid Metal’ finish – developed by BASF Coatings – adds to the visual impact of i-flow’s exterior.  Special-effect pigments in this eco-friendly waterborne coating give the surface a polished metal appearance, and highlight the sculptural character of the car.

Entering mass production in March this year, the i30U takes over from the well-established i30, and incorporates a wide range of improvements in design, specification and competitiveness, as well as even cleaner powertrains.  To complete the upgrade, i30U comes with the Hyundai ‘Triple5’ package, consisting of an enhanced five-year, bumper-to-bumper unlimited warranty, five years’ roadside assistance, and an annual vehicle seasonal health check for five years.  The package reflects the quality and reliability of the Europe-built i30 family and gives added peace of mind to consumers.

At the Show Hyundai will also reveal the latest additions to its growing collection of eco-focused Blue DriveTM innovations.  Five new production vehicles have resulted from the company’s leading-edge program: the i10 blue, i20 blue, i30 blue, i30cw blue, and ix35 blue.  The new arrivals will drive the company towards its goal of global leadership in environmentally-sensitive automotive technologies.

Through innovations such as a stop-start system, low-rolling-resistance tyres and modified aerodynamics, the first four of these cars have CO2 emissions below 100g/km.  The ix35 blue, meanwhile, boasts an impressive 135g/km –a benchmark figure for a C-segment SUV.  These improvements are achieved without compromising performance, reliability or driver satisfaction, making all Blue DriveTM models a realistic solution for motorists.

Looking one step beyond the blue-badged models, the ix35 FCEV moves Hyundai closer to the commercialization of hydrogen fuel cell electric vehicles.  Debuting at Geneva, it features several important innovations over the previous-generation Tucson FCEV, and will lead to production volume of Hyundai FCEVs in the thousands by 2012.  Among the developments implemented on ix35 FCEV are steps to reduce the cost and complexity of fuel-cell manufacturing and new approaches which simplify final assembly.

More information about Hyundai’s star cars and the latest corporate news will be made available on the stand, where media can request press kits.  The company’s press conference will take place in Hall 1 at 14:15 (CET) on Tuesday 2nd March. 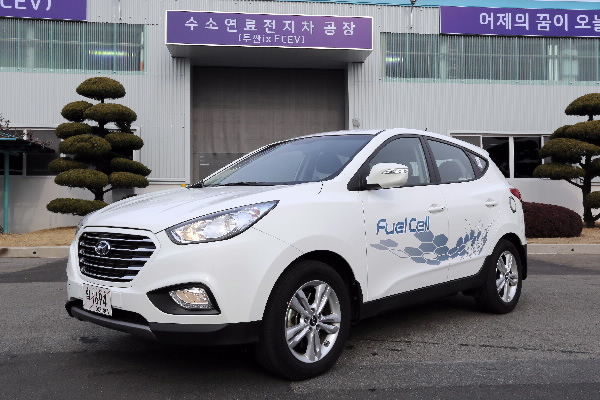 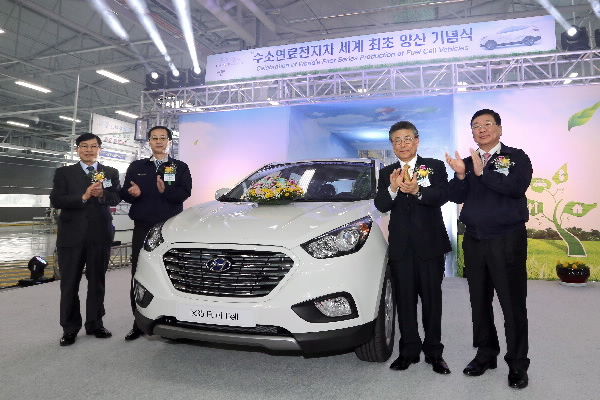