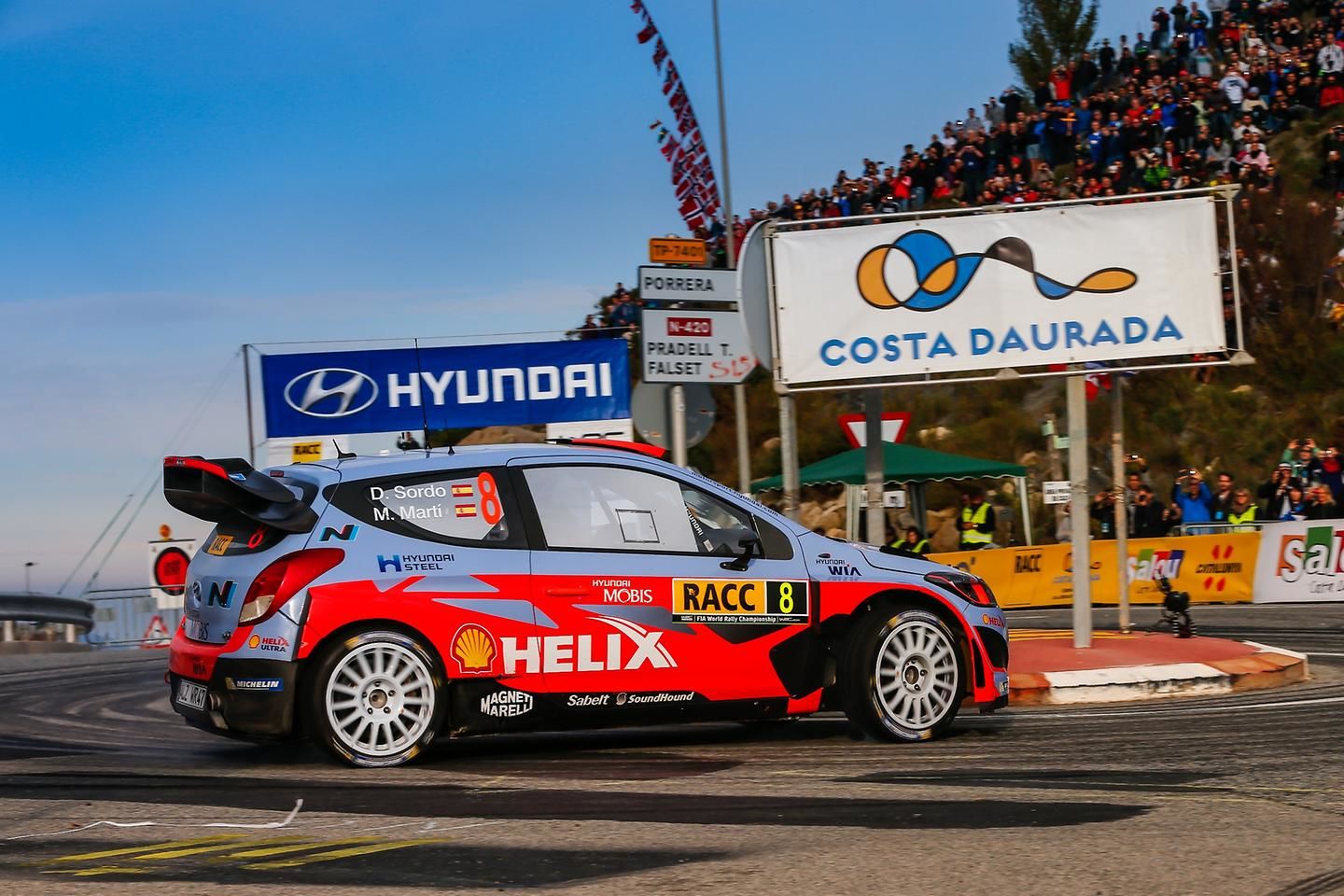 Fantastic Spanish podium for Hyundai Motorsport as Dani Sordo takes third place
- Hyundai Motorsport has come away from a competitive performance in Rally de  España(WRC Spain Rally) with a fantastic 3rd place podium finish for local hero  Dani Sordo
- Hayden Paddon claimed sixth place overall while Thierry Neuville finished eighth after a tough final day with the Hyundai i20 WRC
October 26, 2015 - The Hyundai Motorsport team has come away from a competitive Rally de España with a well-deserved podium finish following a dramatic Power Stage, the last stage of the rally, which promoted Hyundai Motorsport’s Spaniard Dani Sordo into third position.
All three of the Hyundai Motorsport team’s drivers had demonstrated good pace, and the retirement of rally leader Sébastien Ogier in the Power Stage clinched the final podium spot for Dani Sordo.
The result keeps Hyundai Motorsport in third place in the Manufacturers’ Championship with the deficit to four points to reach second, with just one rally remaining - WRC Wales Rally GB in November 12 to 15.
Dani Sordo has been on consistently competitive form in Spain, giving the local crowd plenty to cheer about as he was regularly among the front-runners. He fought hard for a podium and was richly rewarded for his efforts alongside co-driver Marc Martí.
Dani Sordo said: “I am so happy with this result and our performance. We fought hard for a podium result and it was looking like we were going to have to settle for fourth place, which would still have been a great result. Of course it is never nice to benefit from the misfortune of others but to be on the podium in front of the Spanish crowd is just fantastic. We knew it would be hard to break into the top-three but we never gave up and the outcome of this rally shows that you can never be sure of anything until the very end. We have some important points for the Championship and something nice to celebrate with the team and with the fans. It’s a positive thing to take into the final rally of the season, which will be decisive in our push for Hyundai Motorsport to second in the Manufacturers’ Championship.”
Hayden Paddon and his fellow co-driver John Kennard have used the asphalt stages of the weekend’s rally as another valuable learning experience. The duo claimed a joint stage win on Friday’s opening stage and finished sixth overall.
Hayden Paddon commented: “I am happy with how our weekend has gone overall. We made a good start on the mixed surface on day one and we have certainly shown a good improvement on tarmac compared to this time last year. We had a decent Sunday and were able to finish sixth place after the incident in the final stage. All in all, it’s not been a bad weekend, although there is always room for improvement. We now look forward to the gravel of WRC Wales Rally GB with our focus on helping the team in the fight for second in the Manufacturers’ Championship.”
Thierry Neuville and co-driver Nicolas Gilsoul finished eighth overall with improved feeling and confidence during the weekend. They reclaimed one position from ninth to eighth at the conclusion of the Power Stage.
Thierry Neuville said: “We had a difficult start but gradually found more confidence from the car, which led to us improving on Saturday. Thankfully we got the car in good condition and could gain a position at the end to finish eighth. We have one round of the season left and I am focused on continuing to find the confidence to reach good results.”
The current podium marks the third event of 2015 in which Hyundai Motorsport has stepped onto the podium following Sweden and Sardinia, and the first top-three of the year for Dani Sordo. The team still holds third in the Championship, and sets up a tantalising battle for second in the season finale.
The final round of the 2015 FIA World Rally Championship, Wales Rally GB, takes place in Great Britain from November 12-15.
-Ends-
About Hyundai Motorsport GmbH
Established on 19 December 2012, Hyundai Motorsport GmbH is responsible for Hyundai’s global motorsport activities and primarily for its World Rally Championship programme.  Based in Alzenau on the outskirts of Frankfurt in Germany, the company embarked on its debut season in the FIA World Rally Championship in 2014 with a bespoke team of skilled staff and a brand new car, the Hyundai i20 WRC. The team made a strong impression in its first year claiming podium results in Mexico and Poland, as well as a memorable 1-2 in Germany with Thierry Neuville and Dani Sordo. 2015 is Hyundai Motorsport’s second season in WRC and the team aims to build on the firm foundations laid in its maiden year of competition.
Further information about Hyundai Motorsport is available at: http://motorsport.hyundai.com
About Hyundai Motor Company
Established in 1967, Hyundai Motor Company is committed to becoming a lifetime partner in automobiles and beyond. The company, which leads the Hyundai Motor Group, an innovative business structure capable of circulating resources from molten iron to finished cars, offers top-quality best-sellers such as Elantra, Sonata and Genesis. Hyundai Motor has eight manufacturing bases and seven design & technical centers worldwide and in 2014, sold 4.96 million vehicles globally. With almost 100,000 employees worldwide, Hyundai Motor continues to enhance its product line-up with localized models and strives to strengthen its leadership in clean technology, starting with the world’s first mass-produced hydrogen-powered vehicle, ix35 Fuel Cell.
More information about Hyundai Motor and its products can be found at: http://worldwide.hyundai.com  or http://www.hyundaiglobalnews.com