Blue-Will serves as a test bed of new ideas that range from roof-mounted solar cells to drive-by-wire steering, lithium-ion batteries and touch-screen controls, and foreshadows future focused hybrid production vehicles from Hyundai. Blue-Will promises an electric-only driving distance of up to 40 miles on a single charge and a fuel economy rating of more than 100 miles per gallon. Codenamed HND-4, the Blue-Will is the fourth in a series of innovative concept vehicles to come out of the Namyang Design Center.

“Blue-Will’s bold character lines and fluidic sculpture design language give the perfect expression to the advanced eco-friendly technologies found beneath the skin,” said Oh Suk-Geun, executive vice president of design, Hyundai Motor Company. “At a time of rising concern about the environment and our energy future, Blue-Will demonstrates to eco-conscious car buyers everywhere that Hyundai has practical hybrid solutions that will appear on the next generation of vehicles.” 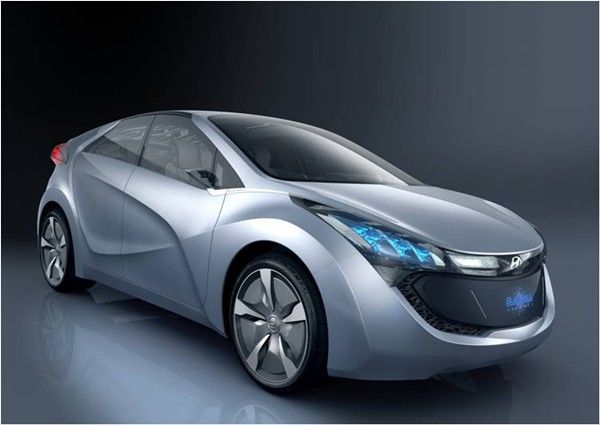 “Eco-sleek” was the core concept driving the design process. Its sweeping character lines and detailed form, key aspects of Hyundai’s fluidic sculpture design approach, elevate this next-generation hybrid to a more distinctive solution than current in-market hybrids. Blue-Will’s slippery surface treatment extends to the underbody where a full-length cover has been applied to minimize aerodynamic drag while maximizing fuel economy.

The LED panel on the front expresses a highly distinctive, futuristic image. The rear bike rack, neatly integrated into the trunk, adds an extra measure of convenience. To minimize weight, advanced materials such as carbon-fiber reinforced plastics and nano composites have been applied to the side sills, moldings and fenders.

Recycled PET material was used for the headlamp bezel, and PLA and PA11 bioplastics have also been used on interior and exterior parts. 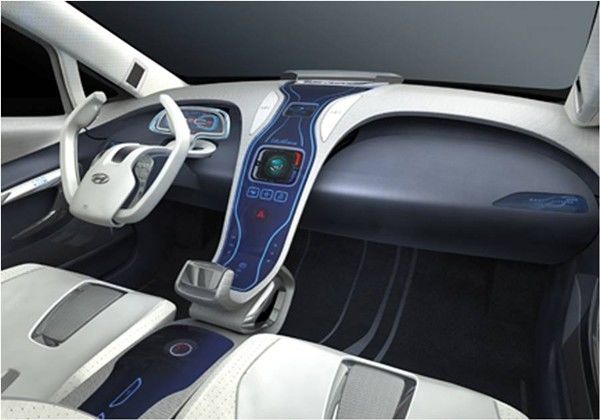 Thanks to the rapid advances in information technologies, designers had a free hand to redefine the interior of a compact car achieving a “digital flow” throughout the cabin. The conventional gauge cluster has been replaced by an ultra-thin Transparent Organic Light Emitting Diode (LED) display mounted on the steering column that is adjustable for rake and distance. Thin-film TOLED technology allows information to be displayed in high resolution color.

HND-4 designers designed the center stack with a simple and clean look thanks to high-tech touch-screen control technology which operates the HVAC, drive (PRNDL) selector and infotainment systems. The focal point of this display is the Eco-Coach. Eco-Coach graphically promotes fuel-saving habits by providing continuous feedback on fuel consumption and driving efficiency. Infotainment capabilities include Bluetooth-enabled speakers.

The Blue-Will concept is powered by an all-aluminum 152-horsepower Gasoline Direct Injected (GDI) 1.6-liter engine mated to a Continuously Variable Transmission (CVT). A 100kw electric motor is at the heart of Hyundai’s proprietary parallel hybrid drive architecture. The wheels are turned by power coming directly from the gasoline engine, the electric motor, or both together, as conditions demand. This parallel hybrid drive architecture serves as the foundation for future Hyundai hybrids, starting with the Sonata hybrid coming later this year in the U.S.

For maximum luggage space, the fuel tank is located under the rear seat where it is neatly bundled alongside the lithium-ion battery that can be recharged using household current. Hyundai was the first automaker in the world to apply lithium-ion batteries in a mass production vehicle last July, when the Elantra LPI Hybrid Electric Vehicle (HEV) went on sale in Korea. This advanced battery technology will power Hyundai’s 2011 Sonata hybrid later this year.

A further expression of the Blue-Will’s design flexibility is found on its panoramic roof where the glass integrates dye-sensitized solar cells without impeding visibility. The solar cells provide a trickle charge that helps operate a cabin cooling fan, reducing interior temperatures while the car is parked in the sun.

Energy from hot exhaust gases is recaptured by a thermal generator which is fitted into the exhaust manifold. The thermal generator then converts the heat into electrical energy to help power auxiliary systems.

Efficiencies are further improved by low-rolling resistance tires and low-drag brakes, where special attention has been paid to the engineering of the brake pads and calipers.

Hyundai Motor America, headquartered in Fountain Valley, Calif., is a subsidiary of Hyundai Motor Co. of Korea. Hyundai vehicles are distributed throughout the United States by Hyundai Motor America and are sold and serviced through almost 800 dealerships nationwide. All Hyundai vehicles sold in the U.S. are covered by the Hyundai Assurance program which now includes the 5-year/60,000 mile fully transferable bumper-to-bumper warranty, Hyundai’s 10-year/100,000 mile powertrain warranty and 5-year complimentary Roadside Assistance in addition to the highly acclaimed vehicle return policy introduced in early 2009. For more details on Hyundai Assurance, please visit www.HyundaiAssurance.com.

2010 Santa Fe Unwrapped With A Pair Of New Engines