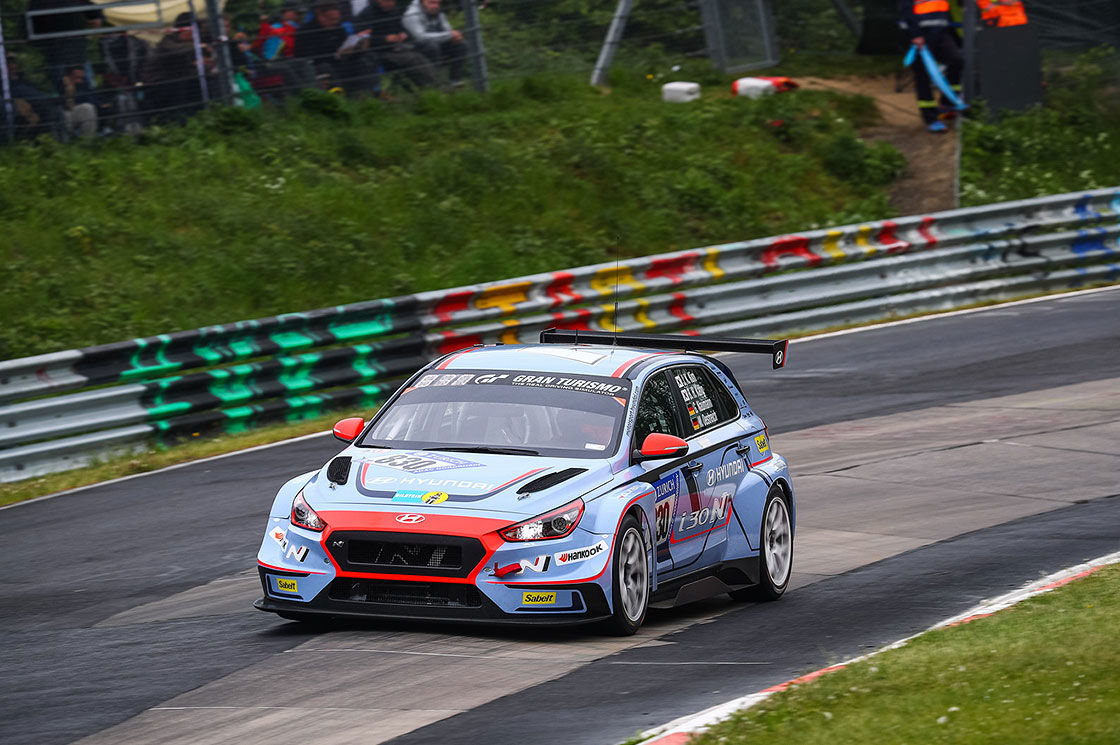 Nürburgring, 14 May, 2018 – The pair of Hyundai Motorsport N entered i30 N TCR proved to be the stars of a busy TCR field on their debut at the ADAC Zurich 24h Race at the Nürburgring Nordschleife. The best of the two entries finished an impressive 35th overall – taking second in the class – proving the performance and reliability of both the car, and the package of options designed specifically for endurance racing.

From the very start of the weekend the two Hyundai crews proved themselves to be the quickest of the TCR-specification runners, taking the top two positions away from qualifying. In doing so they repeated their feat from last month’s Qualifying Race, with Peter Terting improving upon his own previous benchmark to lower the class lap record for endurance racing to 8:58.463 and take class pole position for the #831 line-up completed by Andreas Gülden, Nicola Larini and Manuel Lauck. Moritz Oestreich meanwhile, set the best time around the 25km circuit in the sister #830 entry, and took the race start in the car he shared with Koreans Jae Kyun Kim and Byung Hui Kang, as well as Guido Naumann.

Both cars led the class comprehensively in the opening hours, the #830 team holding a 90 second lead after the first five hours of competition with consistent stints from Kim, Naumann and Kang following up Oestreich’s opening double. However, both cars soon found their formidable pace slowed by minor issues, including when hitting debris on track led to a gearbox oil leak on the #831 entry. The resulting pitstop was a deficit the crew would spend the whole race fighting back from.

Throughout the night, as the forecast rain descended upon the Eifel region, both the i30 N TCR and their crews ran faultlessly. Little more was needed than regular refueling stops, and a scheduled brake pad change necessary to maintain optimum performance for the duration of the race around the famously challenging ‘Green Hell’.

After Larini and Lauck brought the car through the darkness of the early hours the fight back of the #831 team came to a peak in perhaps the worst of the conditions on Sunday morning as Terting was able to make up the lap lost in the earlier stop, as he continued to chase down the class leaders.

Replaced in the car by Gülden after a stellar double stint, Terting was barely able to catch his breath before he was called into action again when the rain returned and offered fresh hope of completing a remarkable story for the team, now running second in class. However, the required pitstop proved timely, as it once more dropped the team a lap behind once more. This was a gap that then became impossible to overcome when the race was halted temporarily due to thick fog, and only resuming with 80 minutes remaining.

On the restart Terting once again proved the performance of the i30 N TCR, by driving through the spray of those ahead and unlapping himself once more, to pull away to consolidate his position.

The strong weekend for the i30 N TCR was completed by the #830 crew, anchored by Jae Kyun Kim, part of Hyundai Global R&D department, based in Namyang, Korea, who finished fourth in class after themselves have to stage a fight back up the order.

Peter Terting said: “The Hyundai i30 N TCR was strong all weekend. Obviously we were very fast in the dry conditions in qualifying, but we also had the handling and performance to be competitive in the wet as well. During the race the conditions were changing lap to lap, with a lot of water on the track. In that situation you need a lot of confidence in car. The result was a true team effort, with the four drivers and the team supporting us. I’m happy we could end the race with a strong result to reward all the hard work with the Hyundai i30 N TCR.”

Jae Kyun Kim said: “The performance of the Hyundai i30 N TCR is incredible. It proved to be the fastest car in the class weekend. As a driver it is very stable and I am very comfortable pushing in all conditions because the chassis is so stable. There are a lot of things from the Hyundai i30 N TCR that can be put into action in in our road cars and future additions to the N brand. Working as part of the team, not only this weekend but in the previous VLN1 and Qualifying Race events I have learnt a lot about the TCR and its strengths that we can use to enhance our R&D work.”

Executive Vice President and Head of High Performance Vehicle & Motorsport Division, Thomas Schemera said: “Under the slogan ‘feel the feeling’, Hyundai is developing high performance vehicles that customers can resonate with emotionally. Using the data and experience we’ve gathered in this race, we will develop fun-to-drive vehicles that will deliver racing track fun to customers during their everyday driving.”

Hyundai Motorsport Customer Racing Deputy General Manager Andrea Adamo said: “In our first Nürburgring 24 Hours Hyundai Motorsport has shown the strong performance and reliability of the Hyundai i30 N TCR in one of the toughest events in racing, in some of the most difficult conditions possible. All of the drivers drove brilliantly to make sure that we have the results to celebrate.  That they were able to make up time during some of the worst of the conditions on Sunday shows the confidence they have in the balance of the car, while the 1-2 result from the qualifying sessions shows the pace of the all-round package we can deliver to our customers.”