Efforts align with Hyundai’s expansion into motorsport, emphasis on performance

“The Rhys Millen Racing-prepared Genesis Coupe really complemented my aggressive driving style in setting the Time Attack world record,” said Dallenbach. “With some very specific adjustments to the car this year giving a more neutral handling balance, I was able to even build upon last year’s world record set by Millen. It was thrilling to drive a racer that made full use of my years of experience at Pikes Peak.”

“Years of experience spent on Pikes’ challenging 156 turns paid off in a big way for the RMR team this year,” said Millen. “By building an all-new Hyundai Genesis PM580-T tarmac-focused race car, the team made precise adjustments, building upon last years’ world record. We focused on leveraging monster downforce, creating incredible traction for our rear-drive strategy on the all-tarmac road surface. Behind the wheel, considerable experience at Pikes Peak over the years allowed me to shave a few tenths from every challenging apex.”

Hyundai Motor is rapidly expanding its motorsport presence and high-performance profile. Hyundai Motorsport GmbH was established in Alzenau, Germany, this year with the goal of preparing an i20 WRC rally car for competition in the FIA World Rally Championship in 2014.

Every lesson about performance, driving dynamics and durability that Hyundai Motor learns from racing will be poured directly into its road-going vehicles.

In addition, Hyundai Motor is opening a workshop at the famed Nurburgring track in Germany to improve the performance testing of its road-going cars.

HYUNDAI GENESIS PM580-T UNLIMITED-CLASS RACER
Not content to rest on their laurels from last years’ all-time record in the RMR Genesis Coupe, the RMR team held nothing back in race preparation for this years’ all-new unlimited-class racecar. Starting with a Grand Am Daytona Prototype tubular monocoque chassis with aluminum honeycomb from Crawford Race Cars, Millen added a custom carbon-composite body modeled after the production Genesis Coupe’s unique greenhouse silhouette. Front and rear suspensions use sophisticated front and rear double A-arms with a pushrod setup and Penske 8760 racing dampers. The engine block and heads are from the Hyundai production-based Lambda engine family, with a Garrett turbocharger feeding the highly pressurized (22:1) air-fuel mixture, creating 900 horsepower and 800 lb. ft. of torque. 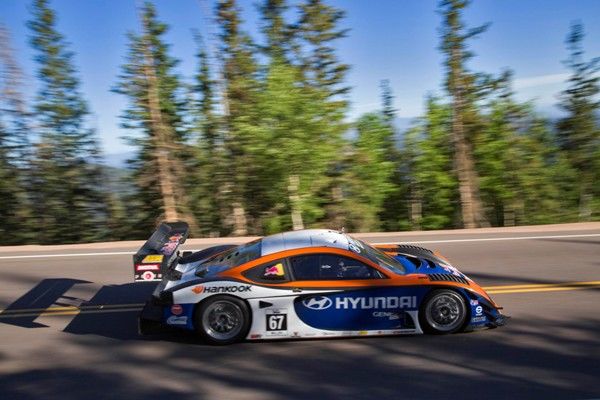