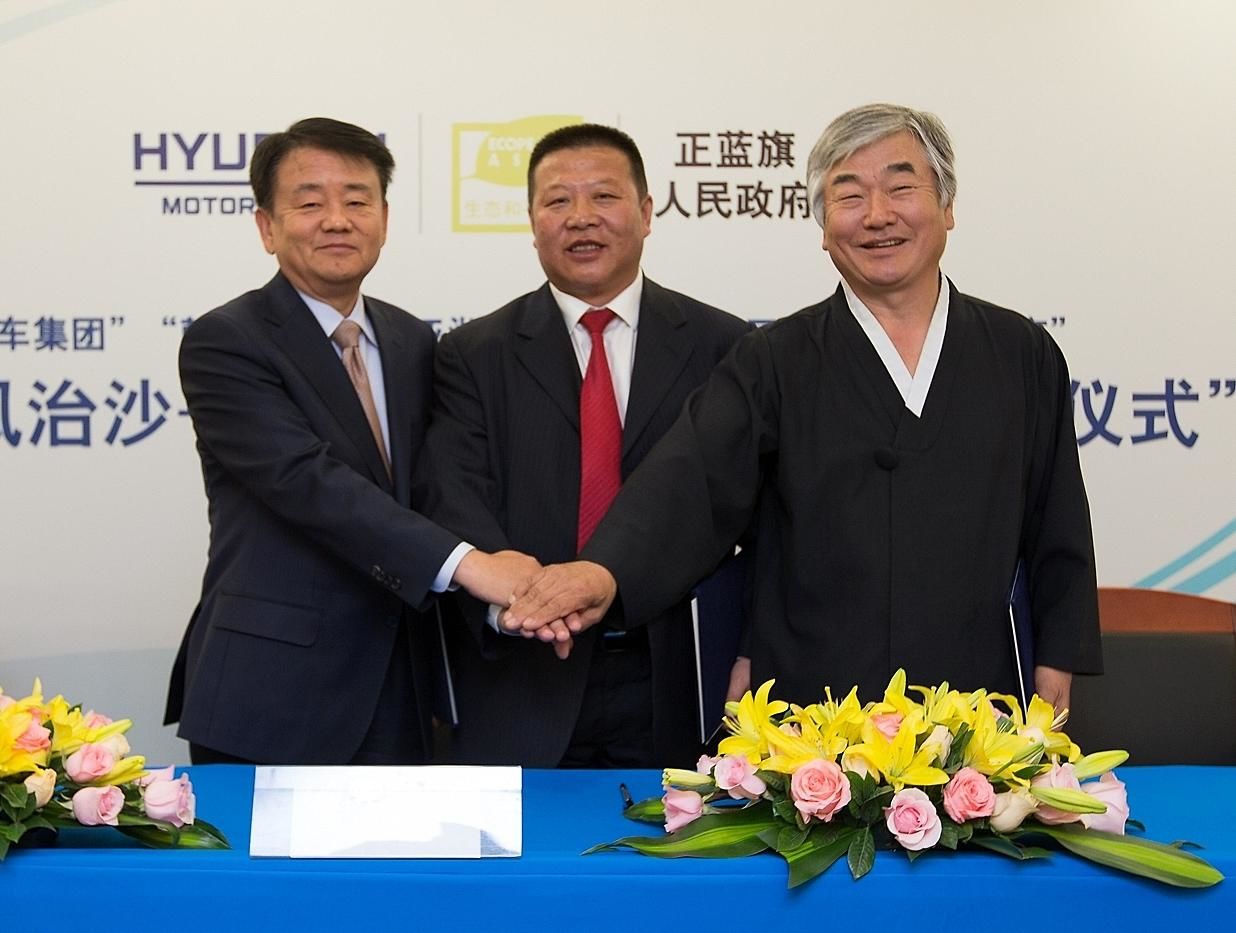 The agreement ceremony was held at the head offices of Beijing Hyundai Motor Company, Hyundai Motor’s joint venture in China. Gang bu He, deputy head of Zhenglan Qi district in Neimenggu, China and Wonho Kim, Chairman of the board of EcoPeace Asia attended the event, accompanied by Hyundai Motor officials.

Based on the success of the Chakanor project, Hyundai Motor decided to start the second phase of Hyundai Green Zone, in Zhenglan Qi, 300km north of Beijing. Together with EcoPeace Asia, Hyundai Motor plans to create 40 million square meters of grassland populated by local native flora in the area for five years until 2018.

“Hyundai Motor is not only growing fast in the Chinese market, but also loved by Chinese customers because of its creative CSR activities,” said Mr. Gang bu He. “Through close collaboration with Hyundai Motor, we will complete the project successfully, so we can prevent environmental problems caused by yellow sand affecting China and Korea.”

After the completion of the second project, the local government of Zhenglan Qi will take over and work to continuously preserve and maintain the area. Hyundai Motor will hire local employees for the project, contributing to the economic independence of the society, and also send ‘Happy Move Global Youth Volunteers,’ the Group’s university student volunteering group, so they can engage in cultural exchange with Chinese university students who volunteer for the project.

Thanks to the success of the project, Hyundai Motor was chosen as the most responsible company by China Corporate Social Responsibility International Forum for four consecutive years since 2011.

“Hyundai Green Zone is a successful CSR model, which significantly contributes to preventing desertification, one of the most serious environmental issues the Chinese government faces, and it was well recognized by the Chinese government,” said Young Man Kim, a Senior Vice President within Hyundai Motor’s Chinese business division. “The second phase of the project is expected to yield greater outcome, as we focus more on preserving the created grassland for the long-term in collaboration with the local government.”

Hyundai Motor Group has been carrying out a variety of CSR activities under four major themes; Easy Move, Safe Move, Happy Move and Green Move. Among them, under ‘Green Move,’ with the slogan of “Recovery of Nature,” Hyundai Motor has been conducting a series of projects to revive and preserve the environment, including Hyundai Green Zone.

More information about Hyundai Motor and its products can be found at:
http://worldwide.hyundai.com or http://www.hyundaiglobalnews.com
.