MONTGOMERY, Ala., October 19 ¾ Hyundai Motor Manufacturing Alabama (“HMMA”) today announced the findings of an economic impact study quantifying the automaker’s impact on the economy of the State of Alabama in 2010.  Conducted by M. Keivan Deravi, Ph.D., special assistant to the Chancellor and professor of economics at Auburn University at Montgomery, the study finds that HMMA and its suppliers generated a total impact of $3.8 billion to Alabama’s economy in 2010, accounting for 2 percent of the state’s Real Gross Domestic Product.  Additionally, HMMA and its suppliers were responsible for more than 34,000 full-time equivalent jobs statewide in 2010, according to the study.

“Hyundai has dramatically improved the manufacturing sector of central Alabama’s economy,” said Dr. Deravi, who has completed similar studies for all of the mega industrial projects recently located in Alabama, including two other automakers and Northrop Grumman.  “While the greater United States experienced a contraction of manufacturing jobs, HMMA contributed to a 21 percent growth rate in manufacturing employment in the Montgomery Metro Area between 2002, when Hyundai began construction of their plant, and 2006 after its first full year of hiring.”

“When we recruited Hyundai, we knew their presence would be a game-changer for central Alabama and the River Region, but little did we realize how significant it would be,” said Montgomery Mayor Todd Strange.  “Hyundai’s impact and that of their suppliers has far surpassed our expectations and we greatly appreciate the confidence they placed in us.”

“Hyundai’s culture and work ethic are an inspiration to us and we are honored to be the home of this world-class company, making world-class vehicles with a world-class workforce,” added Strange.

Key findings of the report include:

“Hyundai Motor Manufacturing Alabama could not be more pleased with our contributions to Alabama’s economy and employment,” said Y.D. Lim, president and chief executive officer of HMMA.  “We are proud of our track record as an important and rapidly growing Alabama employer, and as a manufacturer of high value, high quality and high efficiency vehicles for American consumers.”

Hyundai Motor Manufacturing Alabama, headquartered in Montgomery, Alabama, is an independent manufacturing operation of Hyundai Motor Company, based in Seoul, Korea.  HMMA currently produces the 2012 Elantra and Sonata sedans.  Hyundai cars and sport utility vehicles are distributed throughout the United States by Hyundai Motor America and are sold and serviced by more than 900 Hyundai dealerships across North America. 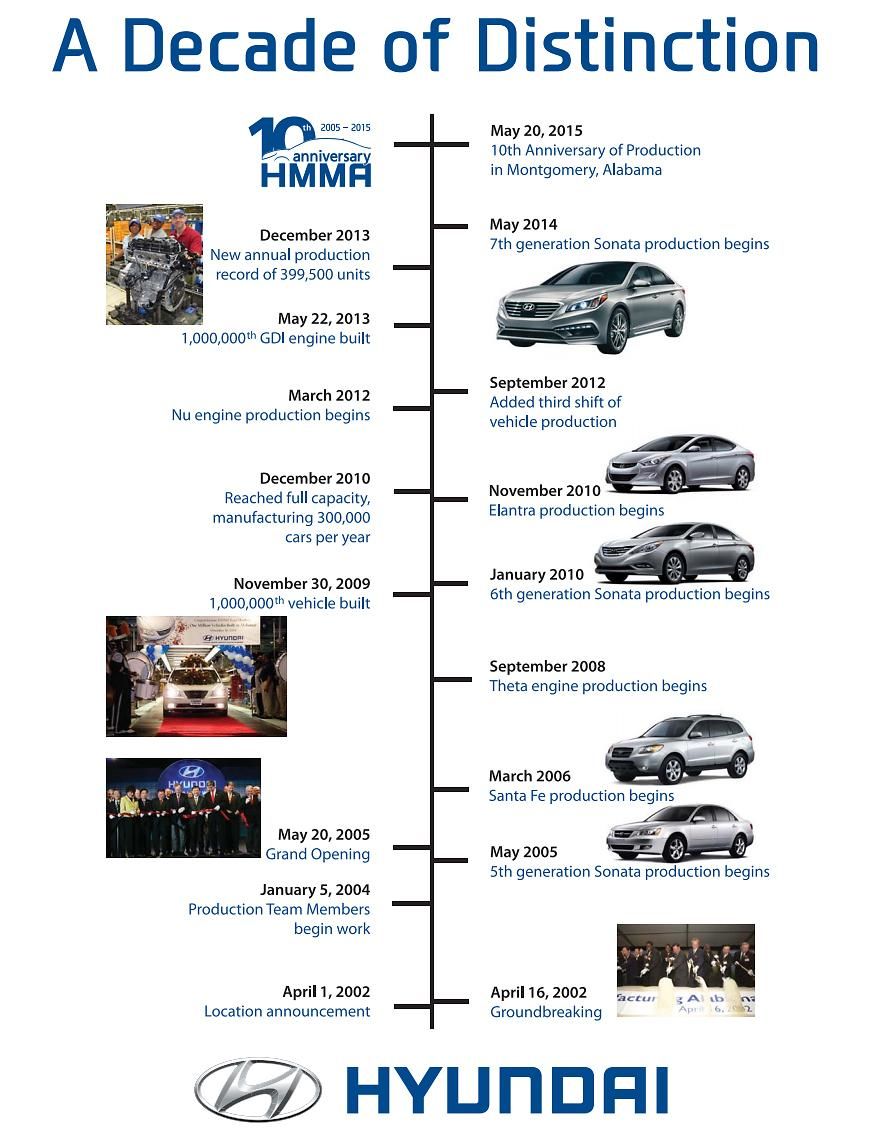