• Both sales figures in Korean and overseas markets rose by 6.1% YoY and
2.8% YoY, respectively


The company will keep focusing on the overseas markets with new models and flagship vehicles despite challenging market conditions.


Furthermore, the company will be flexible in responding to significant market changes in the short term and enhance its brand power to reinforce fundamentals for future growth.


- The shipments from India and Turkey plants were robust, increasing by over 13% YoY and 52% YoY, respectively. The strong sales were driven by new products such as the Creta in India and exports of the i10s and i20s from Turkey.


- Nevertheless, total shipment from overseas plants fell by 2.5% in August compared to the same period of last year mainly from weaker shipments from China and emerging markets.

1. Commercial Vehicles (CV) include LCV, buses and trucks.
2. Hyundai Motor currently has overseas plants in Brazil, China, the Czech Republic, India, Russia, Turkey and the U.S.
3. Domestic Production relate to the vehicles produced in Korea for the overseas markets. 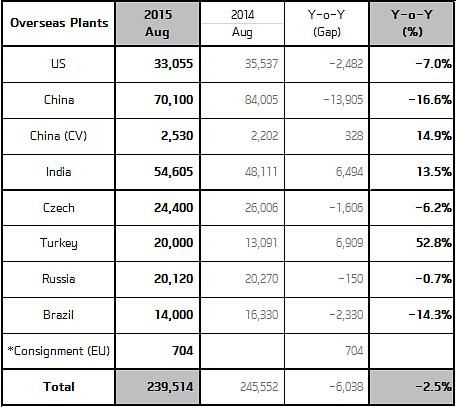