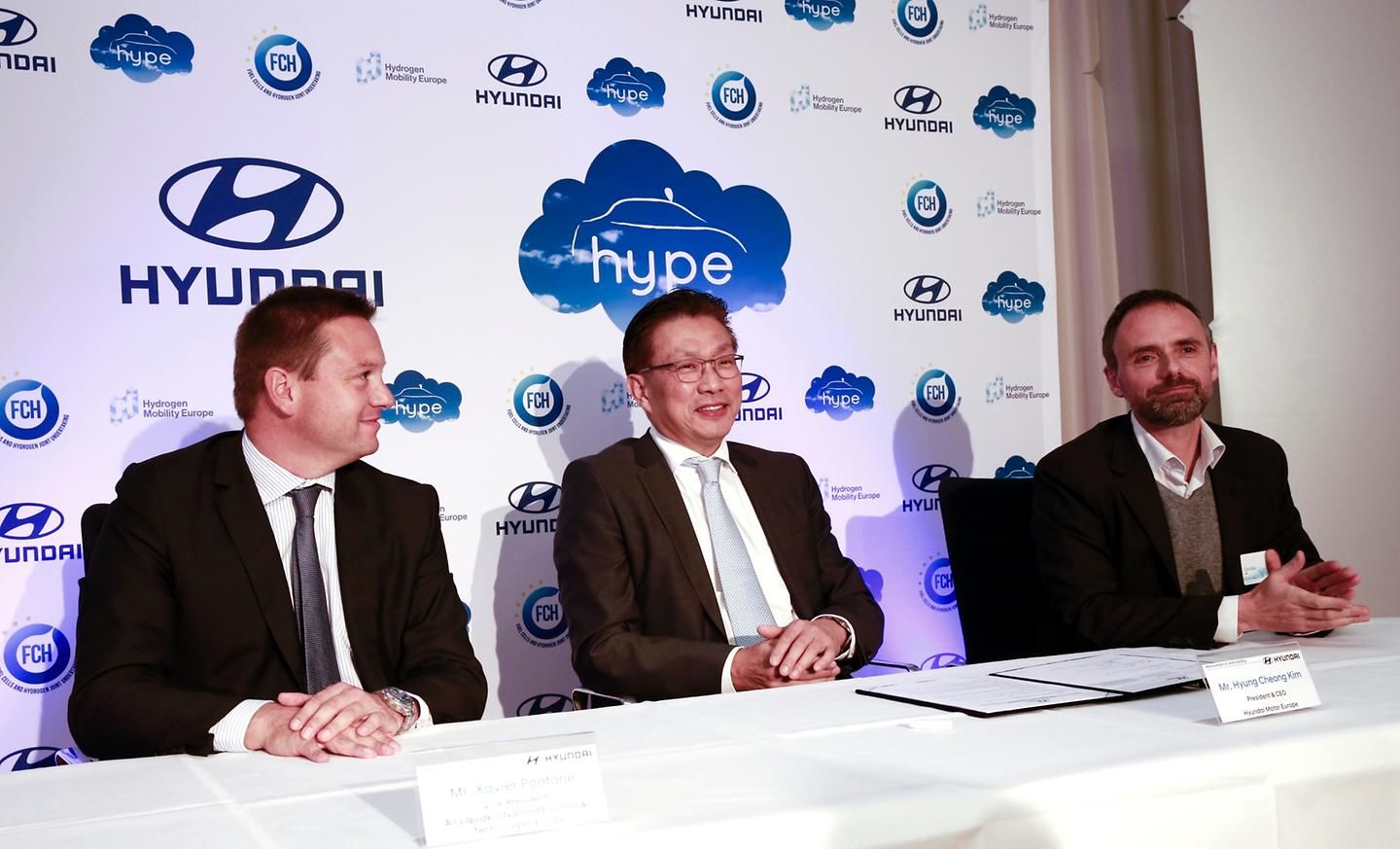 November 10, 2016 – Hyundai Motor will hand over 60 ix35 Fuel Cell cars to the Paris-based electric taxi start-up STEP (Société du Taxi Electrique Parisien). Today a memorandum of understanding was signed at the opening of a public hydrogen fuel station operated by Air Liquide at Hyundai Motor’s European headquarters in Offenbach, Germany. The world’s largest fuel cell taxi fleet “hype” (Hydrogen Powered Electric) currently serves the Greater Paris Area with five ix35 Fuel Cell cars that Hyundai Motor delivered in December 2015. The fleet is planned to increase up to several hundred vehicles within five years.
“With the memorandum of today, STEP and Hyundai Motor have committed to bring 60 additional ix35 Fuel Cell taxis to the streets of Paris,” says Thomas A. Schmid, Chief Operating Officer at Hyundai Motor Europe. “Not only will the fuel cell taxis provide a clean transportation solution for the city, they are also a practical, comfortable and reliable choice for drivers and passengers.”

Saving more than 800 tons of emissions
The 60 new ix35 Fuel Cell vehicles will not add to the 17,000 taxis already in circulation in and around Paris. They are replacing petrol and diesel-powered cars. Compared to a diesel-powered taxi with CO2 emissions of 135 gram per kilometre and an annual mileage of 100,000 kilometres, the ix35 Fuel Cell vehicles will save more than 800 tonnes of CO2 per year in exhaust emissions. That is the equivalent of one person taking the plane and flying more than 200 times from Frankfurt to New York and back. In contrast to this, the only emissions from the tailpipe of the ix35 Fuel Cell during driving are water vapour.
Even when it is produced from natural gas, hydrogen is a far cleaner energy than any fossil fuel: for equal distance traveled, hydrogen cars reduce greenhouse gas emissions by 20% compared with internal combustion vehicles and do not produce any fine particles.

Up to 594 kilometres on a tank of hydrogen
The ix35 Fuel Cell is the world's first mass-produced and commercially available fuel cell electric vehicle (FCEV). Currently there are more than 300 Hyundai ix35 Fuel Cell cars on European roads in 12 countries. That is more than all the FCEVs of other manufacturers combined. Its powerful asynchronous electric motor generates 100 kW (136 PS), and with a maximum torque of 300 Nm it delivers a fun-to-drive experience. Thanks to its efficiency, the ix35 Fuel Cell’s range is up to 594 kilometres on a full tank.


About Hyundai Motor Europe
In 2015, Hyundai Motor achieved registrations of 470,130 vehicles in Europe – an increase of 10.9% compared to 2014 – and replaced 80% of its model line-up to create the youngest car range in Europe. 90% of the vehicles Hyundai sold in the region are models designed, engineered, tested and built in Europe to meet the needs of European customers, served by the company’s extensive European infrastructure. This includes two factories in the Czech Republic and Turkey, which have a combined annual capacity of 500,000 units. Hyundai Motor sells cars in 31 European countries through 2,500 outlets.
Hyundai Motor offers its unique Five Year Unlimited Mileage Warranty package with all new cars sold in the region, providing customers with a five-year warranty with no mileage limit, five years of roadside assistance and five years of vehicle health checks.
More information about Hyundai Motor Europe and its products is available at www.hyundai.news/eu .
Follow Hyundai Motor Europe on Twitter @HyundaiEurope and Instagram @hyundainews

More information about Hydrogen Mobility Europe can be found at:
http://h2me.eu/