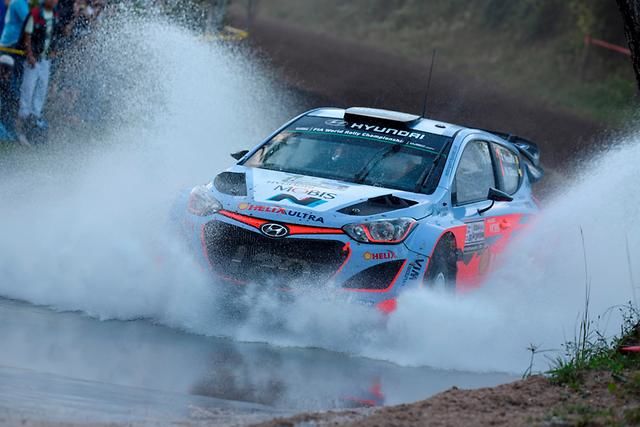 
April 15, 2016 - Hyundai Motorsport is looking to continue the positive start to the FIA World Rally Championship (WRC) season as the team takes on WRC Rally Argentina, the fourth event of the 2016 WRC season. Based in the lakeside resort of Villa Carlos Paz, Rally Argentina will take place from April 21 to 25 at 700km north-west of Buenos Aires.

The New Generation i20 WRC has already demonstrated its competitiveness in each of the three rounds of the Championship so far - in Monte Carlo, Sweden and Mexico - and the team will now target its first-ever podium in Argentina.

WRC Rally Argentina is a challenging event – Thierry Neuville and Dani Sordo’s best results are both fifth-place finishes, achieved in 2014 and 2015, respectively. Thierry Neuville will take to the #3 New Generation i20 WRC with Dani Sordo in the #4 car, both crews competing under the Hyundai Shell World Rally Team banner. Hayden Paddon has only driven Argentina once before with Hyundai Motorsport and will line up in the #20 car for the Hyundai Mobis World Rally Team.

Hyundai Motorsport Team Principal Michel Nandan said: “We head to Argentina with a lot of momentum after our performances at the first three rallies of the year. We have two podiums and a fourth-place finish in those three events, so it is our best start to a year of WRC competition - we want to keep this going! Rally Argentina is a tough event that is well known for how hard it is on the cars as well as for the drivers, but we are confident with our New Generation i20 WRC. We will approach it with all of the experience our team has gained in previous years at the event. The whole team is very motivated to maintain our strong start to the season.”


Hyundai Motorsport will touch down in Argentina with considerable momentum after claiming its first back-to-back podium finishes in WRC with Thierry Neuville taking third in Monte-Carlo in January and Hayden Paddon finishing second in Sweden in February. This pair of podiums was then followed by Dani Sordo’s fourth place in Rally Mexico - a combination of results that makes for the Hyundai Motorsport’s strongest start since it entered WRC in 2014.


Established in 1967, Hyundai Motor Company is committed to becoming a lifetime partner in automobiles and beyond. The company leads the Hyundai Motor Group, an innovative business structure capable of circulating resources from molten iron to finished cars. Hyundai Motor has eight manufacturing bases and seven design & technical centers worldwide and in 2015 sold 4.96 million vehicles globally. With more than 110,000 employees worldwide, Hyundai Motor continues to enhance its product line-up with localised models and strives to strengthen its leadership in clean technology, starting with the world’s first mass-produced hydrogen-powered vehicle, Tucson Fuel Cell and IONIQ, the world’s first model with three electrified powertrains.