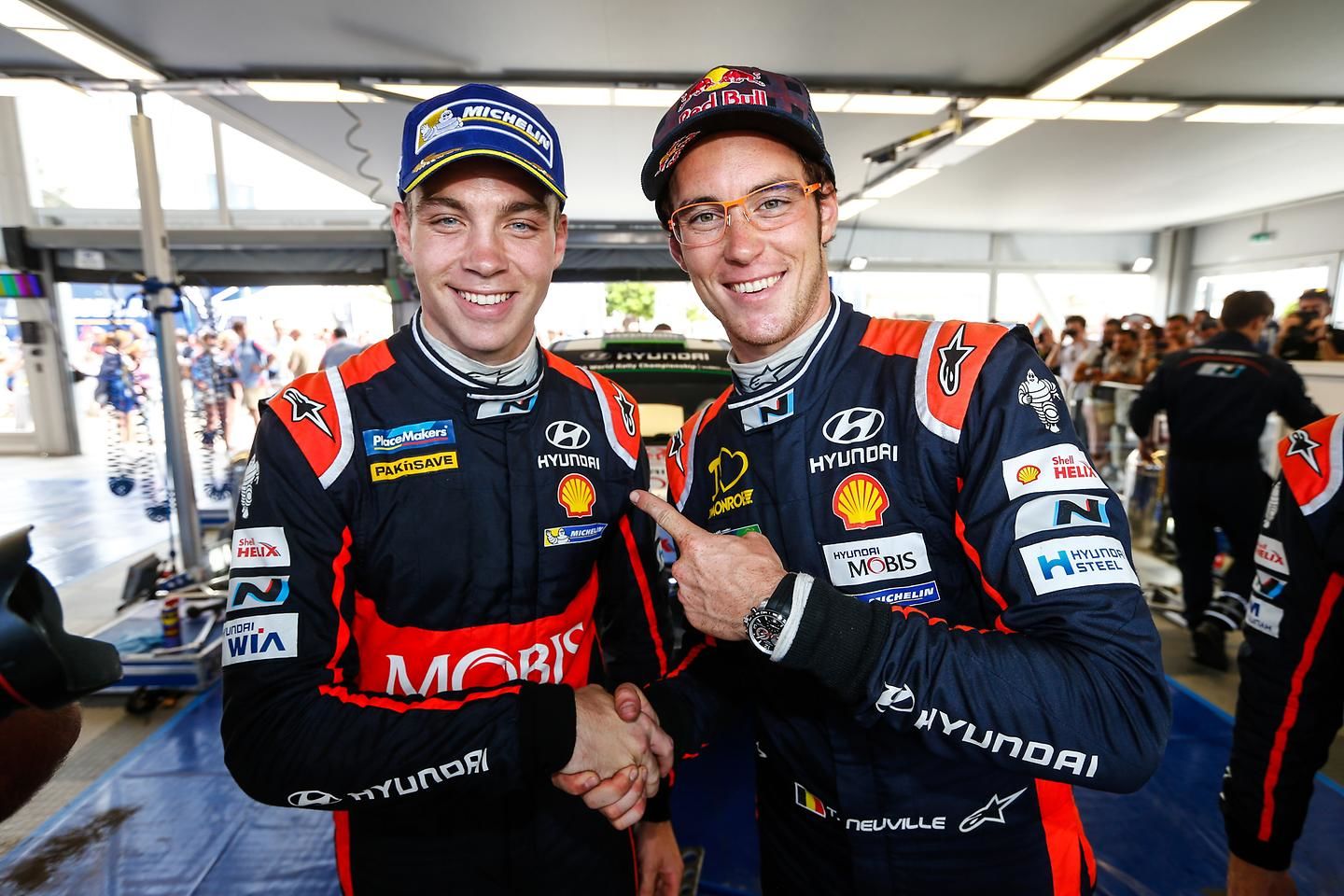 
- The Hyundai Motorsport team has claimed a fantastic double podium in Sardinia, securing second and third place with the Hyundai i20 WRC

- Hayden Paddon, who has been the star of the weekend, took his first ever WRC podium with second place, one year on from his Hyundai Motorsport debut

- Thierry Neuville added a second podium to his 2015 tally with a fine drive to third after a tough weekend for the talented Belgian.


June 15, 2015 - Hyundai Motorsport has contested its most competitive rally of the season so far claiming an impressive double podium result in Sardinia with second and third place. The result gives the team 19 manufacturer points and improves its position in the Championship.

Hayden Paddon (#20 Hyundai i20 WRC) claimed his fourth stage win of the weekend in this morning’s opening stage and went on to secure a well-deserved second place overall. The Kiwi, alongside co-driver John Kennard, led the rally from the start of Friday’s action and only relinquished that lead on Saturday afternoon’s loop. On the one-year anniversary of his debut with the team in Sardinia, it is Paddon’s first ever WRC podium, and Hyundai Motorsport’s sixth in total.

Paddon commented: “To finish on the podium is an absolutely amazing feeling. Words can’t really do justice to how I’m feeling right now. We had a strong weekend from the start but we just tried to take each stage as it came without looking too much at the timesheets. We knew it would get tougher once we lost the start position advantage so the fact we could hold our own against the World Champion was just fantastic. We had our issues on Saturday afternoon, and thought that was the rally over, but thankfully we pushed on through, kept digging deep and made it through the Sunday in a comfortable second. Considering our buffer to Thierry in third, we took today very easily, not taking any risks and we have a debut podium as a reward. It’s been great to have such support from back home and I’m sorry they’ve had some late nights. I hope it’s been as worthwhile for them as it has been for us. We couldn’t have done this without the team, so my thanks to everyone at Hyundai Motorsport, too. Let’s hope this is the start of more results to come.”

Thierry Neuville (#7 Hyundai i20 WRC) had a troubled start to the rally when, on Friday, he experienced mechanical complications but he has fought hard in the face of difficulty. Third place is the perfect reward for his efforts, which included a stage win on Saturday afternoon’s SS16. The result is the Belgian’s second podium of the season after finishing runner-up in Sweden in February, and his fifth in total for the Hyundai Shell World Rally Team with his co-driver Nicolas Gilsoul. It is the second time that Hyundai Motorsport has had two drivers on the podium after the team’s 1-2 at Rallye Deutschland last year.

Neuville commented: “For sure, it has not been an easy weekend so to come away with a podium result is absolutely great. I am very happy for myself and for the team after all of the work we’ve had to put in the weekend. From the very first day, we found these Sardinian stages to be very demanding and often quite rough, which has been tough for the car and from a driving point of view. We have battled a few problems but the team has worked exceptionally well to keep the car running strongly. Overall, it has been a competitive weekend for the team, and we were able to take a stage win and set some other quick stage times. We have benefited from road position at times but we can all be very proud of our achievements. We kept focused and worked our way into the podium positions, so we just had to take it easy to consolidate the double podium result.”

For Dani Sordo and his co-driver Marc Marti, the weekend was one of frustration. The Spanish duo showed excellent pace on the opening day but were hampered from the outset with a 10 second penalty for a start line infringement during Thursday evening’s Super Special. A strong Friday ended with a technical problem, and even on Saturday - under Rally 2 - he endured more drama, forcing him to start Sunday also under Rally 2 regulations. He had a clean run this morning but will be looking to put this rally behind him and bounce back in Poland.

Sordo said: “First of all, this has been a positive weekend for Hyundai Motorsport, even if it is was a disappointing one for me personally. A double podium is a great result and I’m pleased for the whole team. My own weekend was unfortunately not as good. We definitely had the potential to get a podium but we had problems on all days. I got a ten second time penalty on Thursday and then on Friday, although we were quick and chasing down the top three, we had a mechanical problem at the very end of the day, which forced us to retire. We were also unable to finish Saturday but this morning we had some nice stages and could score some points for the Manufacturers’.”

The Hyundai i20 WRC cars have shown competitive pace all weekend but the demands of the tough Sardinian terrain have taken their toll on drivers, cars and teams over the three days of rally action. By working meticulously to deal swiftly with the issues they encountered, the Hyundai Motorsport’s mechanics and engineers ensured this double podium result was possible.

Team Principal Michel Nandan said: “What a weekend! We have experienced the full range of highs and lows but we leave Rally Italia Sardegna with a truly amazing double podium. Hayden has performed exceptionally and he has shown why he is a real star of the future in World Rally. He acquitted himself professionally and calmly - even in the face of issues - and he thoroughly deserves second place. It is particularly fitting on his one-year anniversary as a Hyundai Motorsport WRC driver. Thierry, too, had a positive end to a tricky rally and it’s great to see him score another podium, which adds valuable manufacturer points to our total. Unfortunately, Dani wasn’t able to translate his clear pace into a similarly positive result, but he did everything we expect of him and he’ll be back in Poland. All in all, this has been a hard rally but one which we have tackled in a very mature way. The team performed admirably and worked so hard to ensure we got all cars to Sunday’s final stages. It’s this work ethic that makes these results even more special.”