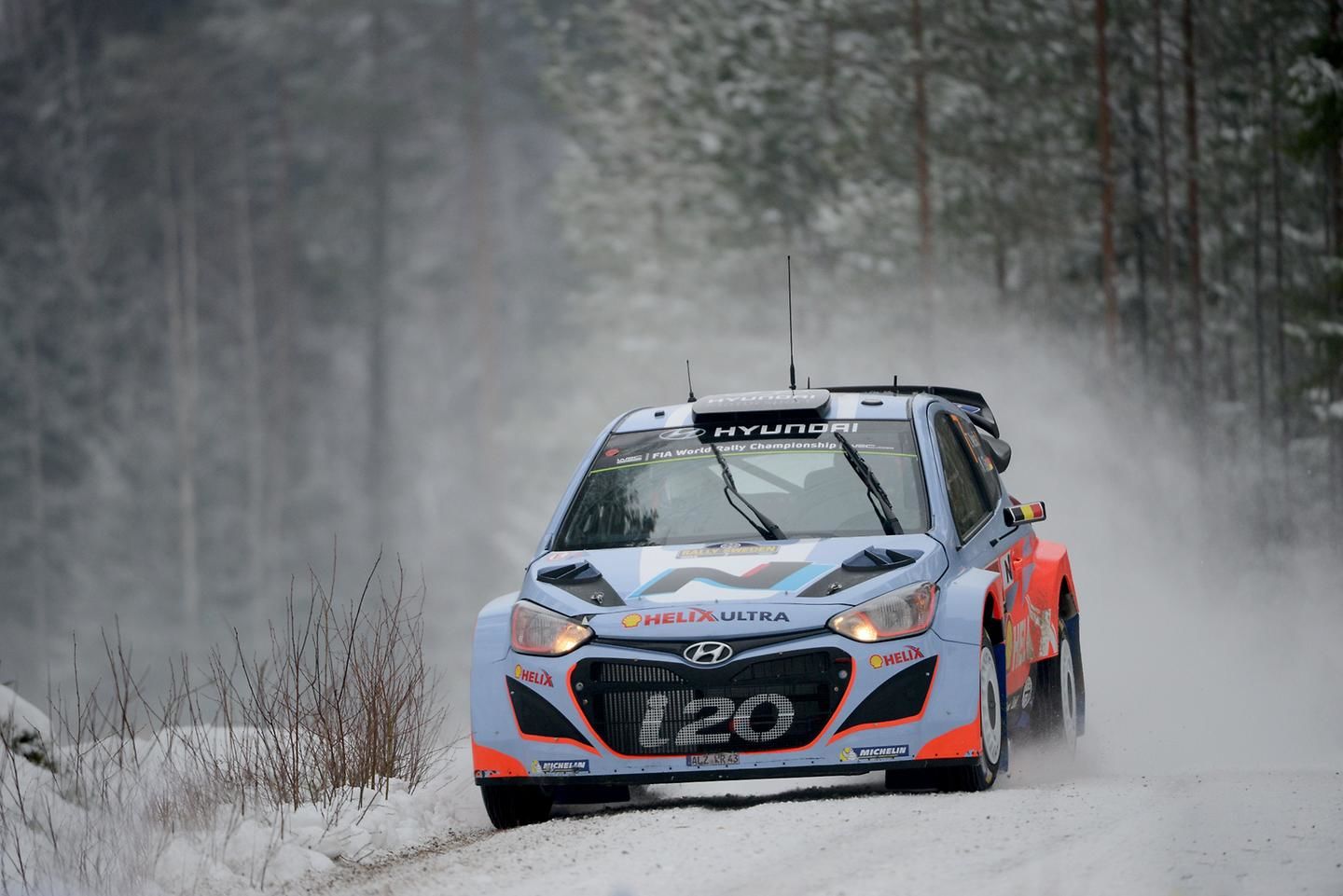 • Hyundai Motorsport will contest next week’s Rally Sweden – round two of the 2015 FIA World Rally Championship (WRC) – with three Hyundai i20 WRC cars
• Thierry Neuville will be joined in the Hyundai Shell World Rally Team by Hayden Paddon who will replace injured Dani Sordi in the #8 car for his first WRC event of 2015
• Kevin Abbring will make his debut for the Hyundai Mobis World Rally Team as he lines up in the #20 car in place of Paddon.

February 6, 2015 – Fresh from a two-car finish in the top six at Rallye Monte-Carlo in January, Hyundai Motorsport heads to Rally Sweden with renewed optimism as it fields three cars for the first time this season.

The team has been forced to make a last minute change to its driver line-up for Rally Sweden after Dani Sordo sustained injuries in a training accident on his mountain bike. The Spaniard will miss the event in order to rest and recover in time for Rally Mexico next month.

Belgians Thierry Neuville and Nicolas Gilsoul (#7 Hyundai i20 WRC) registered a top five finish in Monte-Carlo to get their second season with Hyundai Shell World Rally Team off to a flying start. The duo will be joined by Hayden Paddon and John Kennard, who will now take control of the #8 car instead of the #20. Sweden will be the first of 12 WRC events for the Kiwi crew in 2015 as they look to pick up from where they left off at the end of their maiden season with Hyundai Motorsport.


This second round of the season will also see the team field a third car with Dutchman Kevin Abbring making his competitive debut in Hyundai Motorsport colours. Alongside his British co-driver Sebastian Marshall, Abbring will take charge of the #20 Hyundai i20 WRC in Sweden, and compete under the recently announced Hyundai Mobis World Rally Team banner.

Rally Sweden is the only true winter round of the WRC season with frozen, snowy conditions offering unique challenges for teams and drivers alike. The team carried out a four day test in Sweden in mid-December in order to prepare the developed Hyundai i20 WRC for the team’s second participation in the event. Two additional days were carried out in the region this week with Neuville and Paddon sharing driving duties for half day each and with Abbring testing for one full day.

Team Principal Michel Nandan said: “Rally Sweden was one of the sternest tests for our young team in our maiden season last year. We learned a lot over the course of the event and we will put that experience into practice at next week’s event. We are pleased to field three Hyundai i20 WRC cars for Sweden, although our driver line-up has had to change following Dani’s mountain bike accident earlier in the week. He will miss this event so he can recover from his injuries in time for Mexico and on behalf of the entire team and all the drivers, I wish him a quick recovery. In his place, Hayden and John, who were going to drive the #20 car in Sweden, will now compete in the #8 car. Our test driver Kevin and his co-driver Sebastian will make their debut for the team earlier than planned, driving the #20 car, allowing us to continue with our three-car approach to this event. On the technical side, we have to prepare the Hyundai i20 WRC to cope with the extremely cold conditions. We carried out a test in December, as well as two days this week, in order to prepare ourselves. From the infamous snow banks to sub-zero temperatures and spectacular sights such as Colin’s Crest - which was definitely one of our highlights last year – Rally Sweden is truly unique and we can’t wait to get started.”

Neuville has a best finish of fifth in Sweden, although his final classification in last year’s event masked some impressive performances. The Belgian twice secured the runner-up position in stages which is something he is keen to build on in this year’s event.

Neuville commented: “Rally Sweden is the first and only snow event of the season, which offers special challenges. It is probably the surface on which I have least experience. I have taken part in Rally Sweden on three previous occasions and although I have found it difficult, I have learned more with each visit. For my fourth participation, I am sure can further improve my speed and confidence. If you haven’t become accustomed to driving on such fast roads in these conditions from a young age, it is hard to find a rhythm. I have still set some interesting times and, even last year in our first visit with the Hyundai i20 WRC, we set some second and third quickest stage times, so I hope to improve on that and to be more competitive.”

Paddon said: “It was nice to have a bit of time off back home in New Zealand and to catch up with a few of our partners. We have a pretty big year ahead so it’s nice to be back, refreshed and ready to go. I have only taken part once before in Rally Sweden – three years ago – so it’s still a relatively new event for us. I haven’t really done much snow rallying in the past so it promises to be a fun learning curve. It’s certainly fast and I like that aspect, but the grip levels can be inconsistent, depending on the snowfall before the rally, so we’ll see how it goes. I’m definitely looking forward to it and being part of the Hyundai Motorsport team once again.”

Abbring has never competed in Sweden before so his first event with Hyundai Motorsport will be an important learning curve. He already has some experience with the team which will undoubtedly aid his adaptation to the #20 Hyundai i20 WRC.

Abbring said: I am pleased to have the chance to compete in Rally Sweden with Hyundai Motorsport, which will be a special occasion as it will be my first ever event in a WRC car. Obviously, the circumstances of this opportunity are not ideal and, like everyone else, I send my best wishes to Dani. We have a lot of preparation work to do in order to get up to speed but both Seb and myself will use this event as a learning experience and do all we can to help the team. It will be a bit like jumping in at the deep end but I relish this sort of challenge. Whatever happens, it will be a privilege to represent Hyundai Motorsport and the Hyundai Mobis World Rally Team on the WRC stage.

Rally Sweden takes in 21 competitive stages over a distance of 308km. The rally will get underway with Thursday night’s traditional super special in Karlstad. Friday’s itinerary will take in stages in Norway, with crews not visiting the Service Park for midday service, as well as cross-border action on roads not used since 2011. The frozen forests around the Hagfors service part will make up Saturday and include the famous Colin’s Crest in Vargåsen – which was won by Hyundai Motorsport in 2014. The 15.87km Värmullsåsen Power Stage will act as a prelude to Sunday’s final ceremony in Karlstad.