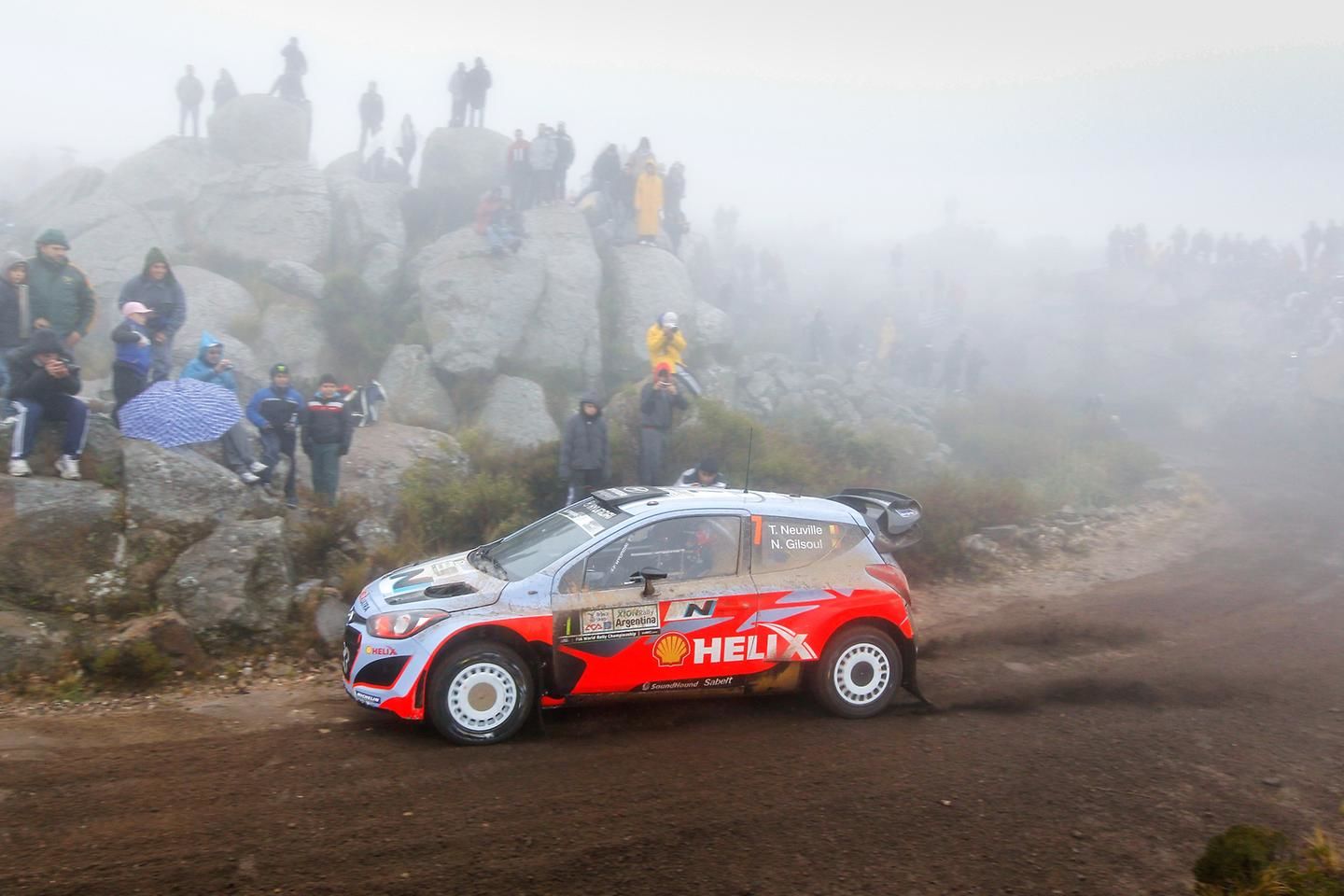 
April 17, 2015 – Hyundai Motorsport is optimistic for another positive result as the 2015 FIA World Rally Championship (WRC) resumes following a six-week break for next week’s Rally Argentina, round four of this year’s 13-event series.

Hyundai Motorsport has shown competitive pace in the three events so far contested in this year’s WRC with numerous stage wins and a podium at Rally Sweden. Returning refreshed and motivated following the top-five result in Mexico last month, the team has made further improvements to its Hyundai i20 WRC rally cars in an attempt to continue the positive momentum in its second year of WRC competition.

Argentina will offer new challenges with spectacular water splashes, lunar-like landscapes and sandy gravel roads, which often become rutted on the second pass, among the main characteristics of the rally. Then there are the enthusiastic Argentine fans who line up on the roadside to cheer for their WRC idols – adding a special atmosphere to the entire event.

After introducing an engine upgrade at Rally Guanajuato Mexico with new fuel injectors fitted in the Hyundai i20 WRC, Hyundai Motorsport will now run the paddle-shift for the first time on Neuville and Sordo’s cars. This new gear selector is based on a hydraulic system and will be more comfortable for drivers, while also contributing to overall performance of the car.

Hyundai Motorsport started preparations for Rally Argentina last month when the team travelled to Spain for a test with all three drivers behind-the-wheel of the Hyundai i20 WRC. Testing is prohibited outside of Europe but the Spanish roads offered similar characteristics to those expected in Argentina next week, allowing the team to prepare well for this demanding event.

Team Principal Michel Nandan commented: “Rally Argentina is always a difficult one, the roads can be quite rough, the altitude has also to be considered and the stages are generally quite long - although with the reliability we have, we hope they will suit our cars. Dani’s injury - sustained when falling off his training bike in February - should be 100 per cent healed and we expect him to be on top form, just like we do with Thierry and Hayden. We hope to make another step forward in Argentina as we introduce the paddle-shift gear change mechanism on Thierry and Dani’s Hyundai i20 WRC cars. With this evolution and the injectors we had for the first time in Mexico we hope to be closer to our competitors. We prepared for Rally Argentina with some testing in Spain last month but it’s difficult to know what to expect in Argentina because of the bad weather earlier this year that resulted in roads being swept away and lots of damage.”

Having finished fifth on each of his three previous participations in Rally Argentina, Hyundai Shell World Rally Team driver Neuville has high hopes of continuing the run of positive results he has achieved so far this year.

Neuville said: “For me the weather and the fog are the biggest factors at Rally Argentina and with the roads getting rougher and rougher as cars pass by, it can be quite a tricky one. We have had rainy editions of the rally in the past where tyre choice has played an important role. This year, we go there a bit earlier in the season so hopefully it will be a bit drier although we know the weather has been quite bad in the past months so we have to see what the road conditions are like. We have had a good start to the season so far and we want to have a good run in Argentina to bring home some more valuable points for me and for the team.”

Sordo goes to Argentina with vast experience of the event having competed there eight times previously and – after a difficult rally last year – he will try his best to fight for a top three position.

Sordo commented: “Argentina is a rally I enjoy a lot! I have competed there many times and it’s one of the best events in the championship. It can be very unpredictable but I feel ready. I also feel at home in Argentina because everyone speaks Spanish, which makes it a special rally for me personally. We saw last year that the roads were a bit broken up with a lot of loose stones so it was a hard rally for the cars. This year it will be the same because of the recent floods. There are also narrow roads where it is very easy to break a wheel on a stone. A podium finish is my target and I will try to do my best to achieve this.”

Flying the flag for the Hyundai Mobis World Rally Team, Paddon will contest Argentina for the second time after winning his class back in 2011 – the year he clinched the FIA Production-car World Rally Championship. The Kiwi is looking forward to making the most of the Villa Carlos Paz-based event and accumulating more experience for the future.

Paddon said: “I have very good memories from my previous outing at Rally Argentina in 2011 and it’s most definitely an event we’re looking forward to. I remember the rally being very rough, it’s one of those events where you have to look more after the car and treat it as an endurance test rather than a sprint so it will be certainly tough. However, this first part of the season is all about learning for us and this is definitely our target for Argentina next week.”

The 35th edition of Rally Argentina features a revamped route of 345.70km which includes an all-new Super Special Stage in the city of Merlo in the province of San Luis which will be the opening test for the competitors on Thursday 23 April. Real competition starts the next day with two stages run twice, the 20km Villa Bustos-Tanti – which hasn’t been used for several years – and the 52km Agua de Oro-Ascochinga, run in the opposite direction compared to last year. On Saturday, the itinerary will bring the competitors to the fast roads of the Punilla Valley and includes the massive 56.77km San Marcos-Charagato stage run twice. To wrap-up the event, competition moves to the Traslasierra Valley with a double pass through the legendary El Condor-Copina used also as the Power Stage.