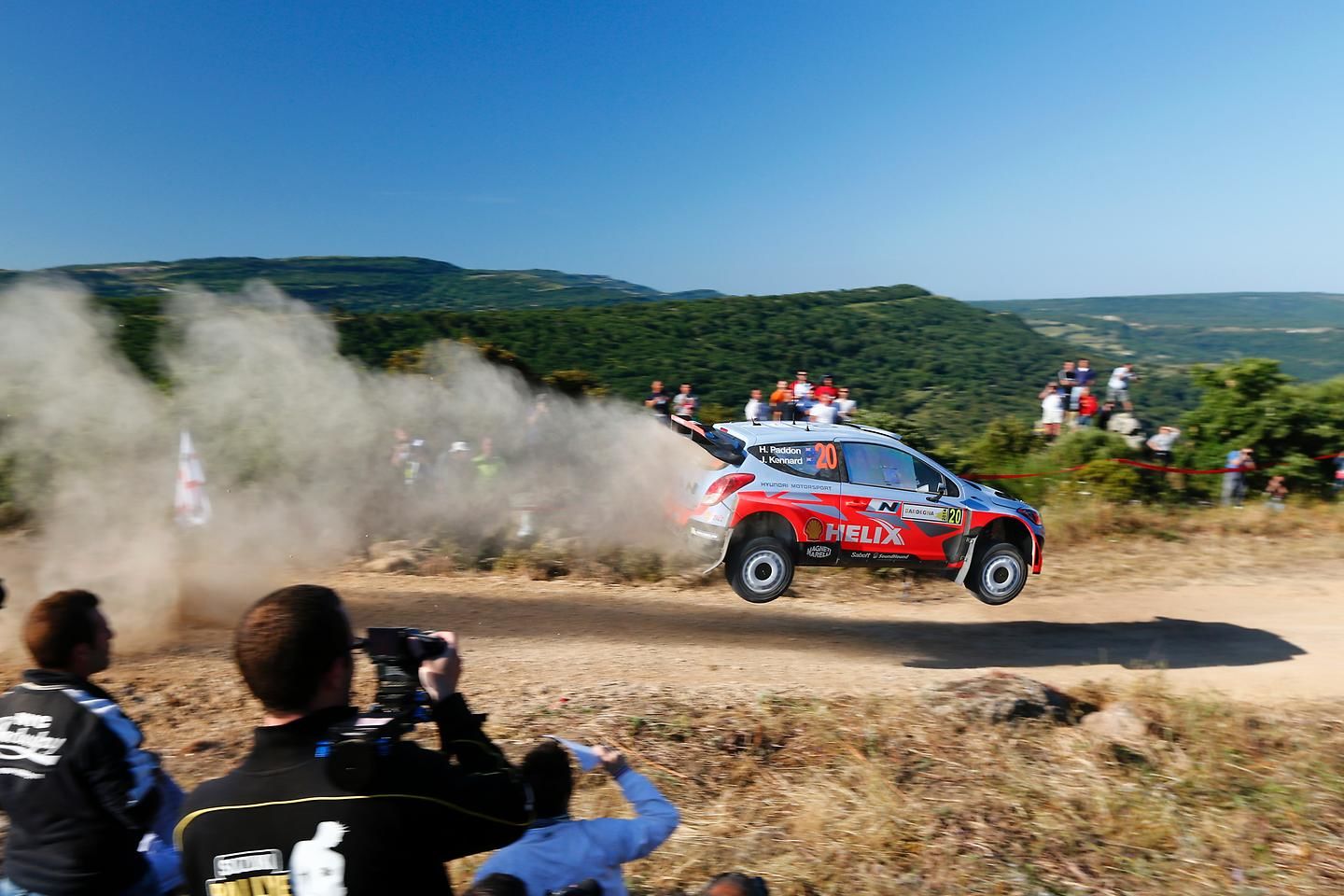 •  Hyundai Motorsport is ready for Rally Italia Sardegna, round six of thirteen in the 2015 FIA World Rally Championship

•  Hayden Paddon will drive under the Hyundai Mobis World Rally Team in the #20 car, one year on from his debut for Hyundai Motorsport in Sardinia.

June 5, 2015 - After mixed successes at the new-look Rally de Portugal held in late May, the Hyundai Motorsport team heads to the Mediterranean island of Sardinia for round six of the 2015 FIA World Rally Championship.


Thierry Neuville and Dani Sordo will once again head to Italy in the #7 and #8 Hyundai i20 WRC cars respectively, while Hayden Paddon will drive under the Hyundai Mobis World Rally Team in the #20 car, one year on from his debut for Hyundai Motorsport in Sardinia.


The Hyundai Motorsport team completed testing for Rally Italia Sardegna in April in Portugal, during the same window that they used to prepare for Rally de Portugal. Sardinia will be the first time that the new paddle shift system, which has already been used in the #7 and #8 cars, is used in the #20 Hyundai i20 WRC driven by Hayden Paddon.


The Italian event was originally based in Sanremo and known as the Rally of the Flowers (Rallye dei Fiori) when first held in 1928. It became a part of the WRC calendar right from the championship’s inaugural year in 1973 and was then moved to Sardinia in 2004. Rally Italia Sardegna is famous for its combination of different landscapes.


The fast but narrow roads are lined with trees and rocks, leaving no room for driver error. Typically with a hard base covered by sand and gravel that will be swept away during first pass, the roads will provide an additional challenge for early cars. Hard and soft compound tyres will be available and proper selection will be a key factor in performance. Temperatures in mid June can be expected to reach above 30°C, providing discomfort for driver crews and higher stress levels on engines and transmissions.


Team Principal Michel Nandan commented: “We have made a lot of preparation for this event and our team is coming in with a lot of motivation from Portugal where both Dani and Hayden completed the rally in the top eight. We learned a lot last year in Sardinia and claimed our first stage 1-2 so we hope to show that we have improved in that time. The roads should be similar to last year although it is likely to be slightly warmer as the event is a bit later. The Hyundai i20 WRC has now claimed nine stage wins, giving us encouragement that we can compete against the top runners in the championship. Thierry did not have good luck in Portugal, rolling his car early on the Saturday, so he has been preparing hard for Sardinia and will try his best to get back his rhythm. Dani, after a very strong performance in Portugal, will be looking to continue his success. Hayden has set a lot of fast times throughout this season and is looking to continue to build his speed and consistency a year on from his first event with us. The Sardinia event is exciting with lots of history - conditions will be hot and dry and the challenging roads
will make sure that we all stay focused.”


Thierry Neuville has had a mixed 2015 season so far and eager to make headway on a positive performance into the second half of the year after tactical tyre choices did not pay off in Portugal. He finished 16th in 2014 at the Sardinia event for Hyundai Motorsport and will be aiming to improve on the 2015 event.


Neuville said: “I think we had a pretty good start to the race last year. We had some trouble with the car, while we were leading the rally actually. That was quite a disappointment but we had benefited from a good positioning that brought us into the lead. We did some good times we were quite competitive. It is going to be an interesting one this year again, for sure. It’s a tricky race - you need a couple of years of experience before you can be really fast and confident here because it is quite narrow, with many twisty and dusty sections. The very slippery and sandy gravel make road cleaning quite important there as well.”


Dani Sordo is currently seventh overall in the Drivers’ Championship, just ahead of his Belgian teammate, and is riding high after his performance in Portugal. It will be his first time completing the Rally Italia Sardegna under the Hyundai Motorsport’s flag and he will be eager to continue his strong 2015 season with a clean and fast performance this weekend.


Sordo said: “Sardinia is a special rally and a very difficult one, because it is very slippery and narrow with a lot of stones along the sides of the roads. It is normally very hot as well, and quite unique because of the sheer amount of change that goes into the road between the first and second passes, with the grip levels changing a lot. The first pass here is much more slippery than the second one, which is also much more aggressive. It is a lot like the event we just had in Portugal, actually. I want to strengthen my position in the drivers’ standings so will be working hard to make sure that we try our absolutely hardest to finish all the stages and do so in the fastest possible time.”


Hayden Paddon will see this year’s Rally Italia Sardegna as an anniversary as it is at the 2014 edition of this event that the young Kiwi driver completed his first race under the Hyundai Motorsport team banner. He has developed extensively since then and is currently establishing a strong 2015 season performance with multiple top three stage times.


Paddon said: “I think that things have come a long way since that first event, both with the car and with myself, and with the team in general in the twelve months that we have now all worked together. I am excited to get back out there and see how far we have progressed! I think that last year I found the stages in Sardinia quite difficult, but I also think that was partly due to the fact that it was my debut with the team, and the first time in the Hyundai i20 WRC, and we were probably a bit taken back by all that. The stages here are technical and quite sandy, similar to some of the surfaces that we saw in Portugal. To be honest, they are probably not my favourite types of stage in the world championship - they definitely are a challenge but we are going to push on and try and make some good improvements from last year and get closer to the front.”


The Rally Italia Sardegna will see drivers take on 24 stages over 400km of Mediterranean gravel. The action will kick off with the street stage in the southern city of Cagliari on Thursday night, then move to Oristano for Friday’s stages, some of which have not been driven since 2011 and while others will be entirely new.


A marathon Saturday will see drivers complete over 200km of stages, some run in the opposite direction to last year, in what will be the longest leg of the WRC since 2012. Highlights include the stomach-churning Micky’s Jump in Monte Lerno and the new Ozieri-Ardara stage. Sunday’s stages, run north of Alghero on the west coast where the service park will be hosted for a second year, include the new Monte Baranta test and the Cala Flumini coastal run, which will provide the weekend’s Power Stage.