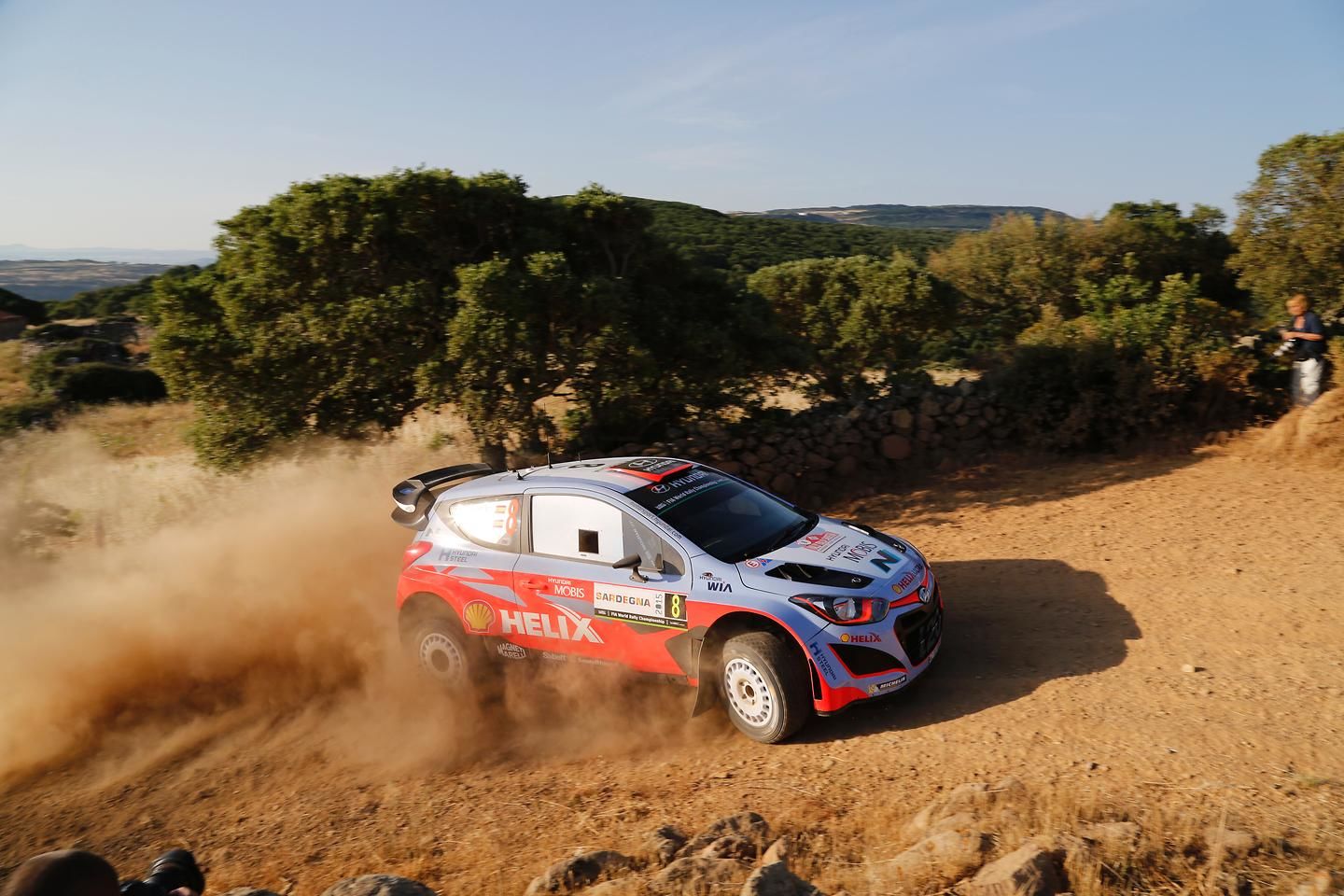 June 3, 2016 - Hyundai Motorsport will be looking to return to form at next weekend’s Rally Italia Sardegna, the sixth round of the 2016 FIA World Rally Championship (WRC), following a tough event in Portugal a few weeks ago.

The team will once again field four cars with an unchanged driver line-up from the last round. Hayden Paddon and Dani Sordo will represent the Hyundai Shell World Rally Team, driving the #3 and #4 New Generation i20 WRCs, while Kevin Abbring joins Thierry Neuville in the Hyundai Mobis World Rally Team. Neuville will once again compete in the #20 New Generation i20 WRC with Abbring driving a 2015-specification Hyundai i20 WRC.

It’s been a busy time for Hyundai Motorsport. Paddon’s crash in Portugal, and the subsequent fire that ensued, resulted in his car being destroyed, so the team has had to build a brand new car from scratch. Paddon’s crew returned from Portugal earlier than the rest of the team to begin work and impressively turned around the job in just seven working days.

At the same time, the team also carried out its pre-event test in Sardinia with all four driver crews spending one full day each preparing for the event. Work centred on fine-tuning gravel suspension and car settings in anticipation for the Sardinian stages.

Returning to the coastal resort town of Alghero, where Hyundai Motorsport celebrated a double podium in 2015, Italy’s summer WRC round is a rough, rock-strewn gravel challenge that often favours a lower road position.
Ambient temperatures can top 30 degrees Celsius and cause strain on engines, tyres, components and crews as the cockpits reach 50-plus over a stage.

There will be new challenges to tackle in this year’s event. Two new stages called Sassari-Argentiera and Tula feature on the itinerary, and a new Super Special Stage test close to Alghero replaces the previous rally-opener held in the south at Cagliari. Some of the remaining stages are deemed Sardinia classics, dating back to the island’s inclusion on the WRC calendar in 2004 as the new Italian venue.

The New Generation i20 WRC has proven to be competitive during the first five WRC events of this season, with podiums in Monte Carlo and Sweden and a spectacular win in Argentina. Despite taking a solid fourth in Portugal, the team will be aiming for a smoother rally in Sardinia - and be looking for a return to the podium.

Team Principal Michel Nandan said: “Despite a tough event in Portugal, we are ready for the next challenge. With just two weeks between the final day of Portugal and leaving for Sardinia, it has been hard work to build a New Generation i20 WRC but one which everyone has come together to achieve. I would like to thank everyone in the team for the hard work involved in getting us prepared for Sardinia. There has been time to debrief on the issues we encountered in Portugal, so we are now ready to move forward as a team. We have some great memories from last year’s double podium in Sardinia. We look forward to restoring the positive momentum created by our best-ever season start as we aim for a trouble-free event for all four driver crews - and hopefully a return to the podium!”

Rally Argentina winner Paddon and co-driver John Kennard (#3 New Generation i20 WRC) endured a tough time in Portugal, after their car caught fire following an off on the opening day. The Kiwi crew will put that drama quickly behind them as they return to the scene of their debut WRC podium.

Paddon commented: “We have some very fond memories from Sardinia. It was the venue of my first rally with Hyundai Motorsport back in 2014, and then twelve months later where we scored our debut WRC podium. You never forget your first podium and we’d love to go back and get another one this year. It is a bit of a different rally this year. Day one is quite new so it means the challenge will be different, but road position can still be key. We had a hard weekend in Portugal but the accident does not dent the confidence at all - in fact we are only more determined than ever to come back fighting in Sardinia. I’d like to thank everyone in the team for getting our car ready for us. Let’s hope we can repay those efforts with a positive result.”

Sordo (#4 New Generation i20 WRC) and compatriot co-driver Marc Martí are the most experienced of the Hyundai Motorsport crews on the Sardinian isle. After three consecutive fourth-place finishes, the Spanish crew are keen to secure their first podium of 2016.

Sordo commented: “Sardinia is always a nice event. It is really narrow in places with many stones on the sides. Road position will be an influencing factor because the first cars will be required to clean the surface. The stages will be very slippery and tricky for those cars, but that’s part of the rally. We had a good one-day test last week in preparation for this event. It’s likely to be very hot inside the cars, so it’ll be physically demanding for us drivers. We are getting more confident with the New Generation i20 WRC with each rally, and we’ve taken three fourth-placed finishes in a row. I am hoping for a trouble-free rally in Sardinia, allowing us to show our ability to fight towards the front.”

Neuville (#20 New Generation i20 WRC) and co-driver Nicolas Gilsoul were on course for a top-five finish in Portugal before their car ran out fuel. The team has fully investigated what happened and measures have been put in place to ensure the issue does not arise again. The Belgian crew will be looking for a good results in Sardinia – where they finished on the podium in third last year.

Neuville commented: “Sardinia is a very special place for me. It was the scene of my first rally some years ago with a four-wheel-drive car and after that I have scored many points there. I have finished twice on the podium, taking second in 2013 and third place with Hyundai Motorsport last year. Hopefully this year we can secure another strong result there. After our fuelling issue in Portugal, we have fully worked through what went wrong and are ready to move forward. As a team, we’re in good spirits despite the difficulties from the last rally. We’re ready to put that behind us and fight for a representative result in Sardinia.”

Abbring (#10 Hyundai i20 WRC) and Seb Marshall will continue to gain experience in the highly competitive WRC environment during the second of their three rallies with Hyundai Motorsport this season outside of their R5 test and development programme.

Abbring commented: “I’m pleased that my next rally with the team comes so soon after Portugal. We hope to build on some of the rhythm from the last rally and put to use the lessons learnt from our mistakes there. From the combination of fast and technical parts we were able to put everything together on some of the stages, which sets us up for this next event. This helps during recce as well for when we are writing the pace notes as you still have the feeling of the car. I’ve competed in Sardinia twice before, but it’s really rough and even rougher compared to Portugal. We have to keep an eye on the stones and focus on simply getting through each stage, but otherwise we can push a little. The target for this rally in terms of performance and in terms of speed is to step up compared to Portugal. We’re here to build our confidence, advance our learning curve, so it’s important to take each stage as it comes, get through safely and add to our knowledge bank.”

Rally Italia Sardegna is often a rally of attrition, as ruts and rocks form car-damaging hazards especially during the repeat run of each stage. Ittiri Arena Show Super Special near the service park location in Alghero will open competition on Thursday evening before eight tests on Friday in the Logudoro and Anglona regions, including the all-new Tula stage.

Monte Actuo plays host to day two in the eastern part of the north with six stages totalling a massive 177 competitive kilometres. The final day takes place just north of Alghero with the picturesque Cala Flumini coastal road and the new Sassari-Argentiera stage, which forms the event’s 6.96km Power Stage.