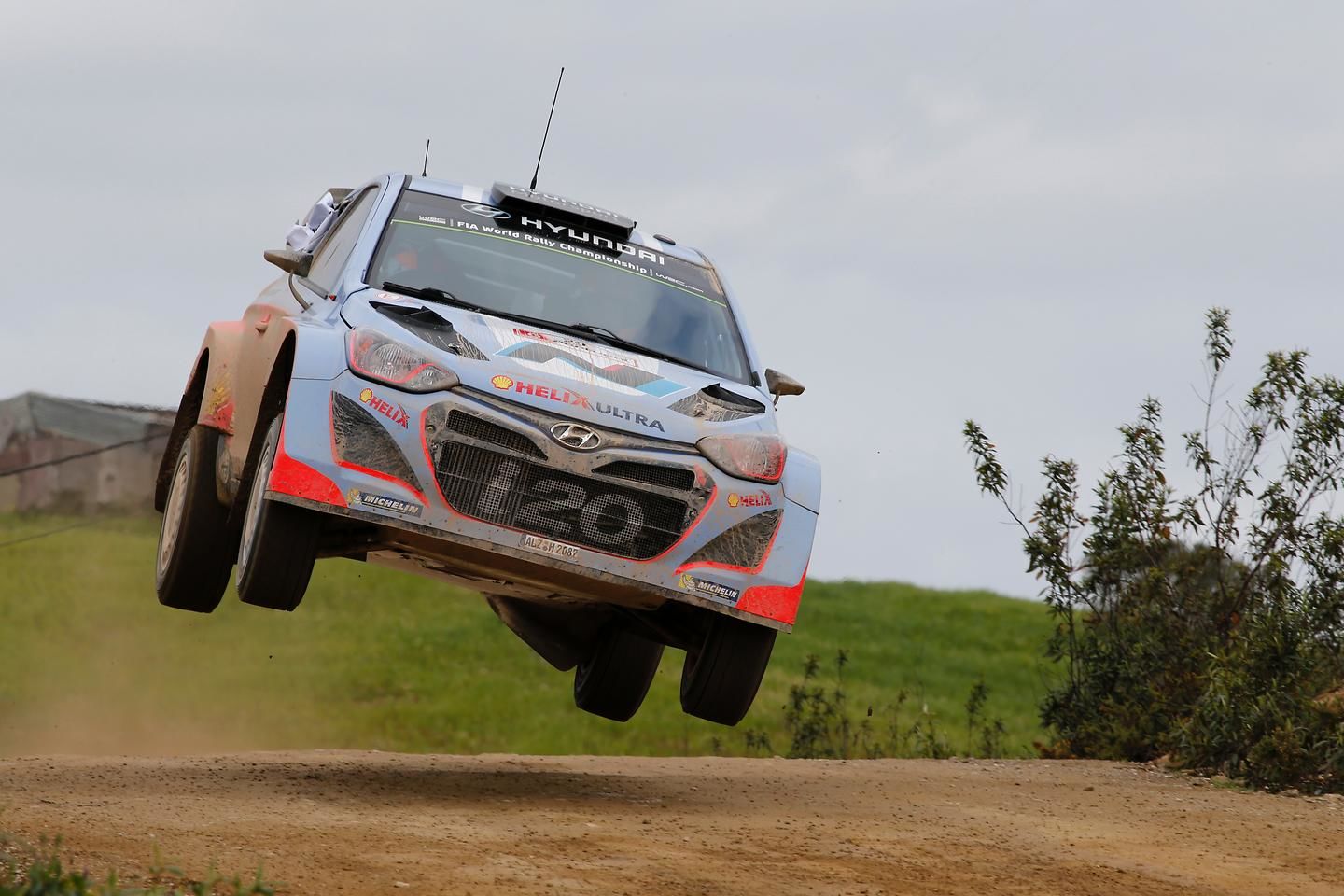 • Hyundai Motorsport is ready for its next event in the 2015 FIA World Rally
Championship, the completely renewed Rally de Portugal – round five of thirteen
this season
• Thierry Neuville and Dani Sordo will once again run under the Hyundai Shell
World Rally Team banner, while Hayden Paddon will fly the flag for the Hyundai
Mobis World Rally Team
• A comprehensive six-day test was held in the area of the rally – in Northern
Portugal  –  back in April with all three drivers.

May 18, 2015 – After two long-haul events in the Americas, the FIA World Rally Championship (WRC) returns to Europe next week with Rally de Portugal, round five of this year’s 13-event calendar. As the rally moves from the Southern Region of Algarve - where it has been held since 2007 - and returns to its origins in the North, the event will represent a new challenge not only for Hyundai Motorsport but for most competitors and teams.


After a tough rally in Argentina, the young Alzenau-based team is eager to get back to WRC action and is looking for a positive result on Portuguese soil. The team will once again field three Hyundai i20 WRC cars at Rally de Portugal with Thierry Neuville, Dani Sordo and Hayden Paddon driving the #7, #8 and #20 cars respectively.


Rally de Portugal returns to Northern Portugal to roads that haven’t seen WRC action since 2001 when the event was run for the last time in the region. New stages mean recce and pre-event preparation will be especially important for the crews and brand new pace-notes mean a lot of extra work for the co-drivers. Some WRC drivers – including Neuville and Sordo – had a taste of the stages up North as they contested the Fafe Rally Sprint (held from 2012 to 2014) which was held in a portion of six kilometres of the famous Fafe-Lameirinha stage.


The team used a six-day test in the area of the rally in April to prepare for the event with all three drivers sharing duties at the wheel of the Hyundai i20 WRC. The test was held in different areas and on different roads to ensure complete preparation and to allow the drivers to find the best set-up for the upcoming event.


Hyundai Motorsport will try to continue to amass as many Manufacturers’ points as possible to regain the second place in the standings, using all the experience gained from the recent test and from last year’s Fafe Rally Sprint.


Team Principal Michel Nandan commented: “We did some testing in Portugal last month to prepare for the rally and we have tried some different roads in order to cover a wider range of conditions which we will encounter next week. We used some sandy stages but also some more compact gravel – still soft but not as dusty. Each driver had two days in the car and from their feedback they are quite happy with the set-up for their Hyundai i20 WRC cars. We’re expecting the new route to be faster than in the South, while road cleaning will be a factor, which could be good for our drivers who are sixth, seventh and 11th in the championship right now. The late May date means we’re not expecting the rain and mud that caused so many problems when Rally de Portugal last took place in the North of the country in 2001. But what we can be sure about is no one should have a big advantage because it’s a new event for everybody. There will be some surprises but our drivers are quite happy to try something different.”


With four previous participations in the Algarve-based Rally de Portugal, Neuville will use previous testing experience of the new Portuguese roads, hoping to find a good feeling with the Hyundai i20 WRC from the beginning of the event and, ultimately, a positive result.


Neuville said: “Rally de Portugal this year is new for everyone as it moves from the Algarve to the North, close to Porto. We have tested in this region both last year and also in April, using different roads and experiencing different conditions. I also participated in the Fafe Rally Sprint in 2013 so I know what to expect from that stage. I really hope to find good settings straight away and be competitive. We made a mistake in Argentina which cost us quite a lot so we’re looking to have a clean run this week and achieve a positive result for us and the team.”


With the stages running close to his native Spain, for Sordo Rally de Portugal will be a home away from home event with the Spaniard having a lot of support from local fans and from the thousands of supporters who will travel from Spain to watch the rally. Sordo and co-driver Marc Martí – who is one of the few competitors to have contested the rally when it was up North in the past –also participated in the Fafe Rally Sprint last year where they came third, while Sordo also won the event in 2013.


Sordo commented: “Rally de Portugal this year will be like what we saw at the Fafe Rally Sprint in the last couple of years, with the stages being a bit more slippery than in the South. From what we know from Fafe, and from testing, the stages are really nice so I’m really looking forward to driving there next week. Also, for me it’s a quite special event as we are close to Spain and there will be a lot of Spanish people in the stages to support me together with the Portuguese fans who are really enthusiastic – I’m sure the atmosphere will be great and we’re really hoping for a good result.”


Rally de Portugal brings back good memories to young Kiwi Paddon as he won the SWRC and PWRC categories in the past. Confident with the configuration of next week’s stages and with his previous experience of similar terrains, Paddon will be looking for a step forward in his performance and will be aiming for a top five result.


Paddon said: “It’s great being back in the North for Rally de Portugal; new stages for everyone mean it gives us a more level playing field. From what we saw at test, the stages look nice and fast but maybe a little sandier and softer compared to the rally in the South. We also found out in testing that if it rains the roads become like ice - very slippery. For me, the key on this event is to be consistently fast on every stage and write good pace notes. If we can do that then we would like to try and be in the top five but that is never easy. Still, we are ready to step up our pace and try to be closer to the front.”


The 49th edition of Rally de Portugal goes back to its origins with some traditional stages like Ponte de Lima, Fafe and Lousada being back in the rally scene for the first time in over a decade. The ceremonial Start on Thursday 21 May in the picturesque city of Guimarães will be followed by a short Super Special Stage on the Lousada rallycross track. The event base will be the Exponor fairgrounds close to Porto where the Service Park and Rally Headquarters will be located. Friday’s stages will bring the competitors close to the Spanish border for three stages repeated twice, while on Saturday the action will be East near Amarante with six more stages – including the 37,67km Fridão stage, the longest of the event. Finally, Sunday will feature the Vieira do Minho stage and the famous Fafe test run twice also as the Power Stage.