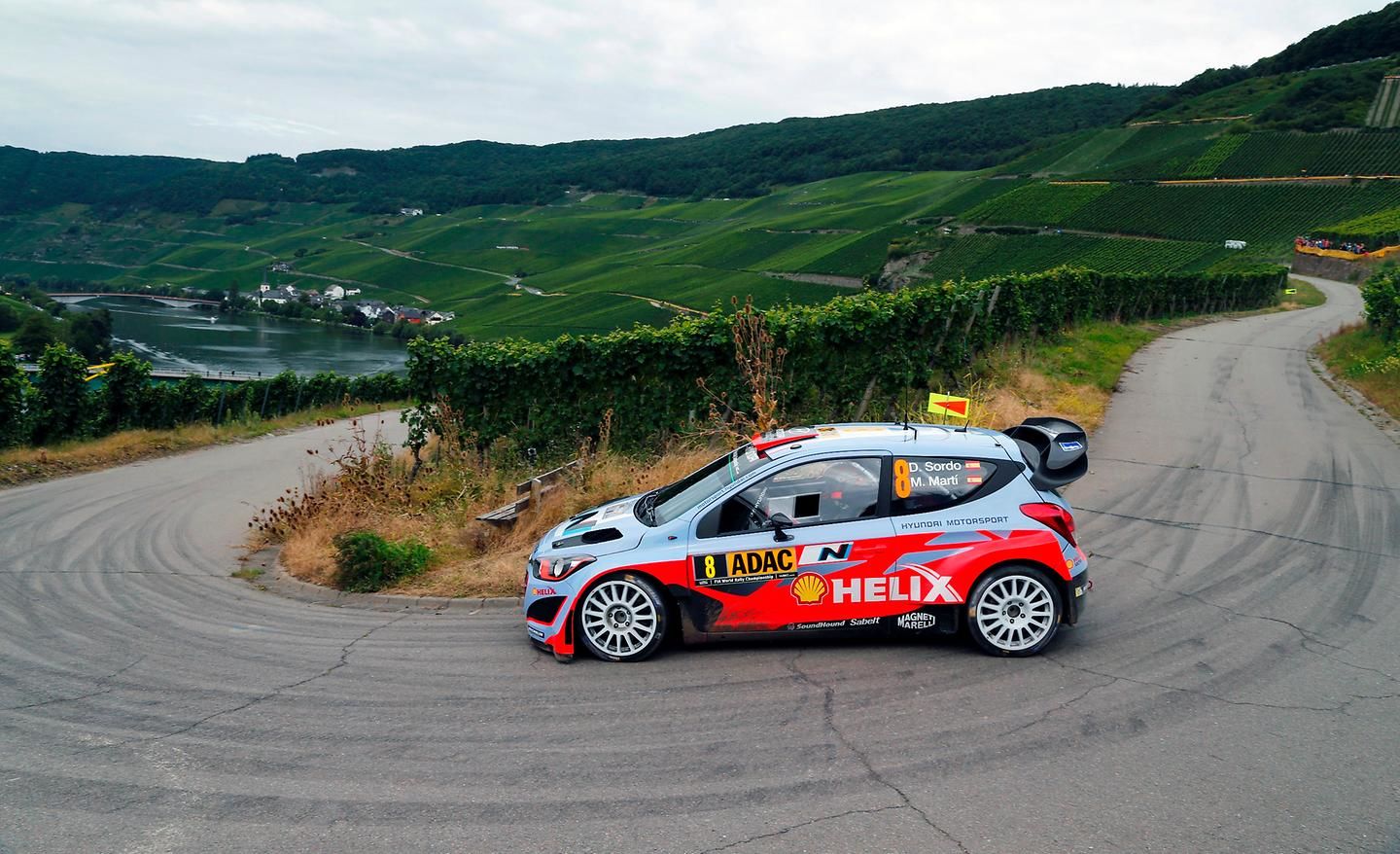 Hyundai Motorsport returns to scene of first victory with

• Hyundai Motorsport approaches the Rallye Deutschland with positive memories
of the previous year, when the team came away with an historic 1-2 finish

• Hyundai Motorsport is challenging for second place in the Manufacturers’
Championship and will look to add to its points with another competitive
performance on the German tarmac.

August 14, 2015 - After mixed fortunes at Rally Finland earlier this month, the Hyundai Motorsport team returns to the scene of an historic 1-2 in 2014 as it tackles ADAC Rallye Deutschland, round nine of the 2015 World Rally Championship (WRC) calendar.


The unpredictable weather in Germany will make tyre choice an important factor to the Hyundai Motorsport team, placing a premium on up-to-date information from weather and gravel crews. Accurate pace notes are essential, particularly with the huge car-breaking kerbstones known as hinkelstein presenting an additional challenge on the military ranges.


Team Principal Michel Nandan commented: “Germany is our home rally, as our Alzenau base is not so far from Trier. Of course there are good memories here for us, because last year we had a good result - our first 1-2 finish. For the second time this year we will have four Hyundai i20 WRC cars, although this is the first time on a tarmac event. All four drivers have been testing in the Trier area in the build-up to the event, and we are all quite pleased with the setup. Our fourth driver is Kevin Abbring and along with Thierry and Dani, we have three drivers who feel at home on the tarmac so we can hope for a good result to add to our points’ total.”


Belgian Neuville, alongside co-driver Nicolas Gilsoul, topped the podium last year in Germany for the first time, breaking a long history of Citroën wins at the event. After a difficult start to Rally Finland with a crash in shakedown, the Belgian regained his confidence during the weekend with a solid drive to fourth, so he will be aiming to quickly get into his rhythm on what is also his “home” event.


Neuville said: “We have really good memories from Rallye Deutschland last year - it was our first victory for the team, which was a very big result to have done in a very short time. Getting a first win in the first season as a team was something unexpected, and we are going to try our best this year so that hopefully we have the same speed as last year and the same confidence. This rally is very close to my native town of Sankt-Vith, and a lot of relatives and friends are coming down to support us throughout the weekend. My brother is competing as well, so it’s going to be a huge event for our family.”


Spanish driver Sordo is also a fan of the German event with a string of solid results, claiming second spot behind Neuville, with co-driver Marc Marti in 2014 and winning in 2013 before he joined the Hyundai Motorsport team. He will be bringing his experience to Trier and, after some determined performances this season, is ready to deliver a strong result.


Sordo said: “The rally in Germany is very nice, and it is very special to me. It is very narrow in the vineyards and the military area and with a lot of hairpins, so it is exciting to drive with the Hyundai i20 WRC. The sensations you feel when driving through those vineyard stages are really special - narrow and short, with several corners.”


Despite significantly less experience on tarmac, Paddon enjoys the rally and is looking for a solid finish. The Kiwi, with co-driver John Kennard, hopes to gain a greater understanding of this tough event’s nuances, while also learning from his teammates.


Paddon commented: “The tarmac is going to be a big change for us - it’s a surface that we don’t have much experience with, so it is going to be a challenge. We’ve done the rally a couple of times before and I really enjoy this one - the character of the roads, the way that they wind in and out of the vineyards. For sure, it is going to be challenging, particularly when we have three tarmac-specialist teammates! We will have our work cut out, but I see this as a positive and I am sure we can learn a lot from them throughout the rally. The biggest thing, of course, is for us to learn and get to the finish.”


Hyundai Motorsport test driver Abbring, alongside co-driver Sebastian Marshall, will return to competition following runs for the team in Sweden and Poland earlier this season.  The young Dutchman will be looking to familiarise himself further with both the Hyundai i20 WRC and the demanding German terrain.


Abbring commented: “I have competed in this rally twice before, but it was about five or six years ago. It is a very tricky tarmac event, as well as our first asphalt event in the Hyundai i20 WRC car. There are a lot of grip changes in the surface on these stages - you always have to keep in mind that you need to read the road carefully, in order to avoid mistakes.”


Rallye Deutschland will again be based around Trier, starting and finishing in front of the ancient Porta Nigra, scene for the team’s celebrations last year. The German rally is widely recognised as the most difficult tarmac event of the WRC calendar, with the twisty Mosel vineyard roads and Baumholder military tracks providing drivers with a unique series of technical challenges.


New features for this year’s event include the back-to-back Saturday sprint runs across the Panzerplatte and a return to the daunting Bosenberg roads of Saarland, which feature in the itinerary for the first time since 2011. Friday will see drivers hit the Eifel region, navigating 136.30km of hairpin-heavy vineyard roads along the borders of Belgium and Luxembourg. Saturday will mix the daunting military tracks of the Panzerplatte with more winding country roads, drivers will then return to Mosel for the rally’s conclusion on Sunday, with the Stein & Wein and Dhrontal stages run twice, the latter run once as the Power Stage.