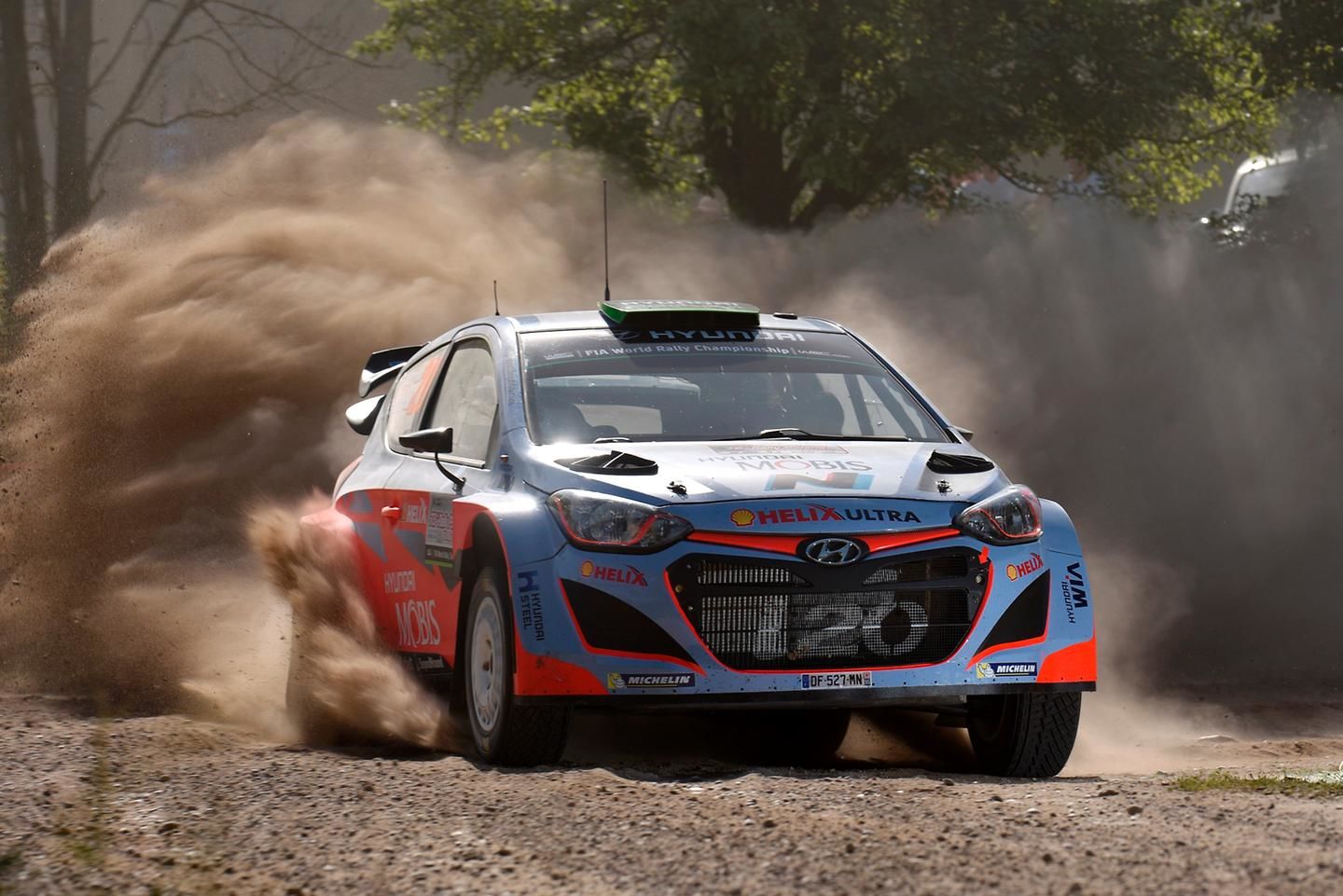 - Hyundai Motorsport has brought Rally Poland of the 2015 FIA World Rally Championship (WRC) to a successful conclusion with all four cars making the finish
- Hayden Paddon was the highest placed Hyundai i20 WRC driver in fourth place - his second consecutive top five finish in WRC - with Thierry Neuville in sixth position
- Dani Sordo rounded out the top ten with Kevin Abbring registering another WRC finish in the first of four scheduled rallies for the Dutchman.

July 6, 2015 - The Hyundai Motorsport team has registered an impressive four-car finish in Rally Poland, the seventh round of the Championship, the first time that the team has entered four cars into a WRC event.

Two of the Hyundai i20 WRCs completed the 19-stage rally in the top six with the Kiwi crew of Hayden Paddon and John Kennard taking fourth place with Belgians Thierry Neuville and Nicolas Gilsoul in sixth. Paddon was elevated from fifth to fourth position at the end of the rally after the Jari-Matti Latvala’s accident in the Power Stage.

Spanish duo Dani Sordo and Marc Martí finished comfortably inside the top ten after a battling weekend, while Kevin Abbring and Sebastian Marshall, in the #10 Hyundai i20 WRC for the first of four scheduled WRC events this season, enjoyed a trouble-free end to their rally.

A clean run for Paddon (#20 Hyundai i20 WRC, Hyundai Mobis World Rally Team) has seen the Kiwi secure a fine fourth place finish. The result marks his second consecutive top-four finish, and a satisfying continuation from his podium performance last time out in Sardinia.

Paddon said: “It’s been a pretty good weekend for us overall and I’m pleased we have been able to secure another strong finish. It wasn’t the most straightforward rally in terms of finding a rhythm and confidence within the car on the fast gravel but we have persevered and can be satisfied. Obviously, there’s always room for improvement and things we can do to go faster, but considering the new routes on this rally things have gone well. The team has worked hard and a four-car finish is a good result for everyone. We can now use the experiences of this weekend to prepare for Finland where more fast routes await us.”

Neuville (#7 Hyundai i20 WRC, Hyundai Shell World Rally Team) was able to take sixth place despite a spectacular roll in SS18 Baranowo, from which the Belgian fortunately escaped without significant damage.

Neuville commented: “It’s been a pretty good weekend overall and I think we have to be pleased with all we have achieved. We have shown some good pace over the weekend. We have picked up some good manufacturer points, which is the most important thing and we can look to Finland with optimism.”

It’s been a challenging weekend for Sordo (#8 Hyundai i20 WRC, Hyundai Shell World Rally Team) but the Spaniard has had a reliable run and will look to put his experience to good use at the next rally - another fast event in Finland later this month.

Sordo said: “In all honesty, we are not where we want to be because we want to be fighting at the front but I have enjoyed the stages and had fun driving. We have just struggled to get more out of the car and ourselves. The rally has been quicker than we imagined and we’ve been a bit too slow in most of the corners. We tried to push but it’s never easy when you have to be so precise. We need to work better for the next rally, which will be another fast event and accurate pace notes will be very important. Let’s hope Finland is a better event for us!”

Abbring (#10 Hyundai i20 WRC, Hyundai Mobis World Rally Team) has taken a measured and disciplined approach to his second WRC event with Hyundai Motorsport. The Dutchman has picked up confidence day-by-day and used the event as a valuable learning experience to prepare for the future.

Abbring said: “I am extremely happy to have reached the end of this rally, my second event with Hyundai Motorsport. I have thoroughly enjoyed these fantastic and fast stages, which have really forced us to adopt a fast learning curve. We have had to make continuous adjustments and updates to our pace notes over the weekend. In some stages, I wish I could have trusted the notes more to push a little but the priority for this event was to finish, and we’ve done that. It’s a pleasure to be part of the Hyundai Motorsport line-up for this rally and three more this season.”

Hyundai Motorsport has added more valuable Championship points to its 2015 tally, with just two points separating second and third in the Manufacturers’ standings, a thrilling close battle that will continue at the next round in Finland.

Team Principal Michel Nandan said: “Firstly, I am delighted that we have been able to get all four of our Hyundai i20 WRC cars to the conclusion of this Rally Poland. It’s the first time we have entered four cars into a WRC event so to get a 100% finish at this fast and often demanding event is a real testament to our drivers and the team’s efforts. Hayden has had a strong rally once again and it’s very pleasing to see him in the top five again. Thierry, too, has had a good weekend. His roll this morning was spectacular and he was lucky to get away without any major damage but he has added more important points to his and the team’s totals. Dani has not had an easy weekend but is to be commended for his consistent approach and for picking up a top ten result. Kevin, in his second event of the season, has used this weekend as a learning experience, and has achieved his pre-rally target of getting to the finish. All in all, we have some positives and some things to improve for the next rally - but we’re already looking forward to Finland.”