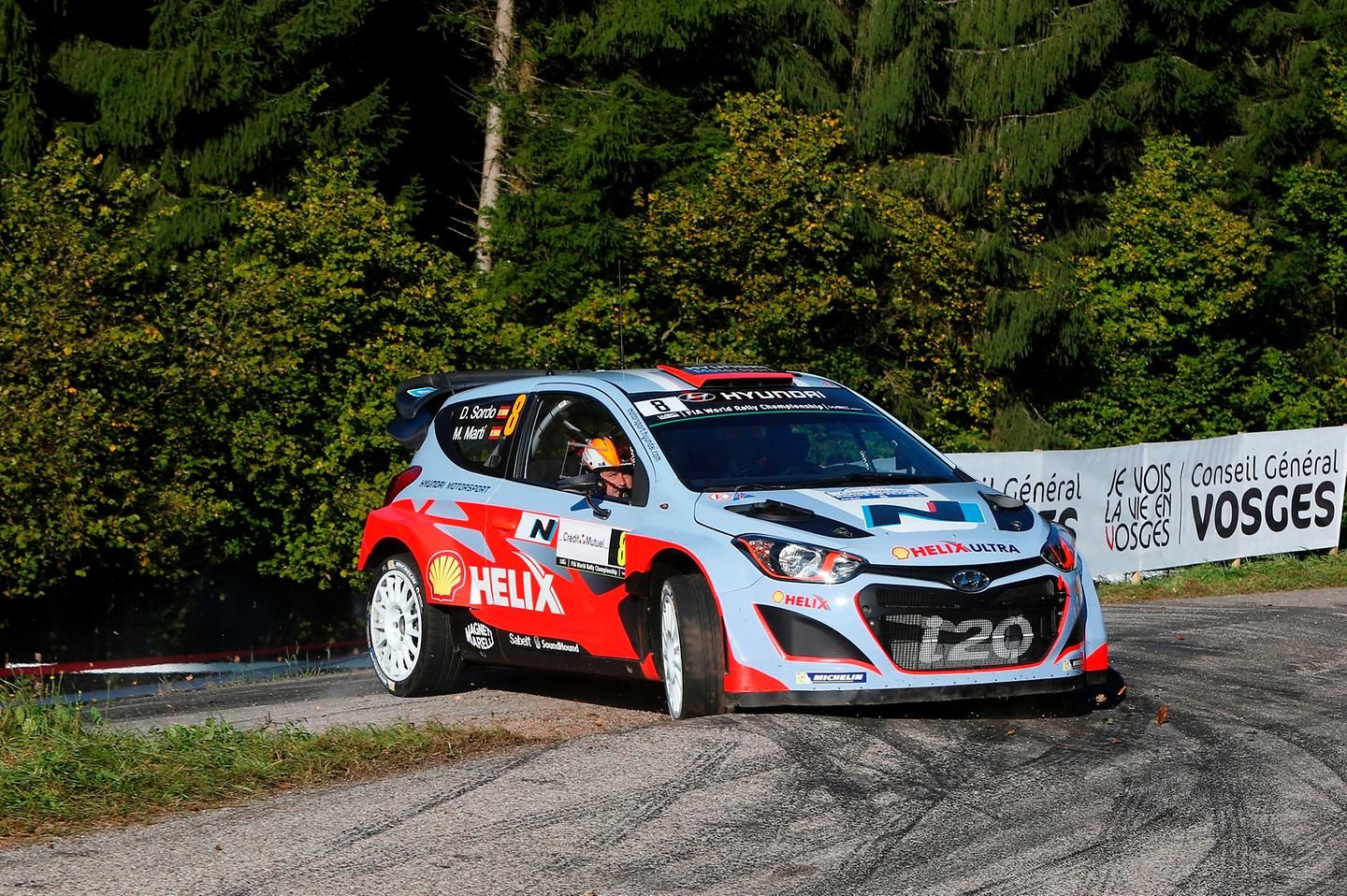 September 25, 2015 - Hyundai Motorsport will head to the Mediterranean island of Corsica to compete in the 11th round of the 13-event FIA(Federation Internationale de l’Automobile) WRC Rallye de France next week from October 1 to 4.

The team put in a strong performance at the previous round of the Championship, Rally Australia, with a competitive top-five finish. As WRC returns to Europe for the final rallies of the year, Hyundai Motorsport will face another challenge to strengthen its hold on second place in the Manufacturers’ Championship.

Rallye de France will be the third time this season that the Hyundai Motorsport team enters four cars into a rally. Thierry Neuville and Dani Sordo will represent the Hyundai Shell World Rally Team while Hayden Paddon will be joined in the Hyundai Mobis World Rally team line-up by Kevin Abbring. Rallye de France features nine stages and seven of these exceed more than 35km. The tarmac stages are abrasive and will make tyre choice an important factor to Hyundai Motorsport.

Team Principal Michel Nandan commented: “With a move to Corsica, an historic rally with a big reputation, Rallye de France is going to be a challenging event because the format is quite different from what we are used to. We have a central service park in Corte but the drivers will sleep every night in another base, so from a logistics point it requires an extra effort. The weather will play an important role, so it is going to be a difficult job to get the right forecast and make the right tyre choices and car settings. We are participating again with four cars, with our test driver Kevin Abbring joining Thierry, Dani and Hayden. I hope it will be easy for the drivers to adapt to the new stages and it will be good to see them challenging in the Hyundai i20 WRCs. We will push for as many points as possible with the objective to retain our second place in the Manufacturers’ Championship.”

Thierry Neuville has been building his confidence as the 2015 WRC season has progressed and is settling into his rhythm, with a goal to pick up as many championship points as possible.

Thierry Neuville said: “The Tour de Corse(Corsica) is a really nice event and I have some great memories there as I won my first international rally in Corsica in 2011. I have really been looking forward to going back, even if this year the routes have changed quite a lot so everything will be new for me. I know it is going to be a tough one with the stages mostly in the mountains. The roads are tricky and can be very narrow, bumpy and broken so we will have to be careful to avoid punctures as well. Weather conditions can be changing - when you are on top of the mountains it is much colder, and the rain comes fast. The itinerary is quite unusual, with only a couple of very long stages each day - so we will have to find the right rhythm from the very beginning. I will be aiming for as many points as possible in every rally and will not stop pushing until the very end of the season.”

Dani Sordo has driven well recently, having previous experience on the Corsica’s cliffside roads, coming third in the 2006 and 2007 when the rally was part of the WRC and winning the IRC’s 2011 event.

Dani Sordo said: “I have a lot of good memories of Corsica - I have had some good results there and have learned many skills there. This year it will be completely new, so it will be important to recce the stages carefully and make sure we produce accurate pace notes so that we can push with full determination. It is a classic rally and very technical - you have to be precise in your positioning of the car. I like the rally a lot in general - it is not so fast, as the roads are narrow and very twisty. It is steep and there is an element of danger, the roads have sharp cliff-drops on one side so it is very important that you drive with accuracy. The team has been great in preparing my car so I am very excited to get out there and see the island again. It is a great rally for sure.”

Hayden Paddon has finished his top-five finish at Rally Australia early this month, and he will be competing in Corsica for the first time for the new challenge.

Hayden Paddon commented: “The Corsica event has a lot of history - I used to follow the rally when growing up and it is one of those legendary events, so it’s going to be nice to go and experience the roads. I am feeling good after Australia and feel comfortable with the Hyundai i20 WRC car so let’s give it everything and see what happens!”

Kevin Abbring will join the rally for Hyundai Mobis World Rally Team, having driven earlier this year in Germany recently. The young Dutchman will use his former experience to familiarize himself with the Hyundai i20 WRC for this rally.

Kevin Abbring said: “In Germany, we had the opportunity to drive a lot of kilometres on the tarmac so that should be good training for Corsica. It will be an exciting rally and the long stages will be a great opportunity for me to get some prolonged driving under pressure in the car. I am definitely keen to put everything I’ve learned so far into practice with the Hyundai i20 WRC.”

Rallye de France will start on next Thursday evening, while Hyundai Motorsport’s service park will be located in the central island town of Corsica.


About Hyundai Motorsport GmbH
Established on 19 December 2012, Hyundai Motorsport GmbH is responsible for Hyundai’s global motorsport activities and primarily for its World Rally Championship programme.  Based in Alzenau on the outskirts of Frankfurt in Germany, the company embarked on its debut season in the FIA World Rally Championship in 2014 with a bespoke team of skilled staff and a brand new car, the Hyundai i20 WRC. The team made a strong impression in its first year claiming podium results in Mexico and Poland, as well as a memorable 1-2 in Germany with Thierry Neuville and Dani Sordo. 2015 is Hyundai Motorsport’s second season in WRC and the team aims to build on the firm foundations laid in its maiden year of competition.
Further information about Hyundai Motorsport is available at: http://motorsport.hyundai.com


About Hyundai Motor Company
Established in 1967, Hyundai Motor Company is committed to becoming a lifetime partner in automobiles and beyond. The company, which leads the Hyundai Motor Group, an innovative business structure capable of circulating resources from molten iron to finished cars, offers top-quality best-sellers such as Elantra, Sonata and Genesis. Hyundai Motor has eight manufacturing bases and seven design & technical centers worldwide and in 2014, sold 4.96 million vehicles globally. With almost 100,000 employees worldwide, Hyundai Motor continues to enhance its product line-up with localized models and strives to strengthen its leadership in clean technology, starting with the world’s first mass-produced hydrogen-powered vehicle, ix35 Fuel Cell.
More information about Hyundai Motor and its products can be found at: http://worldwide.hyundai.com  or http://www.hyundaiglobalnews.com