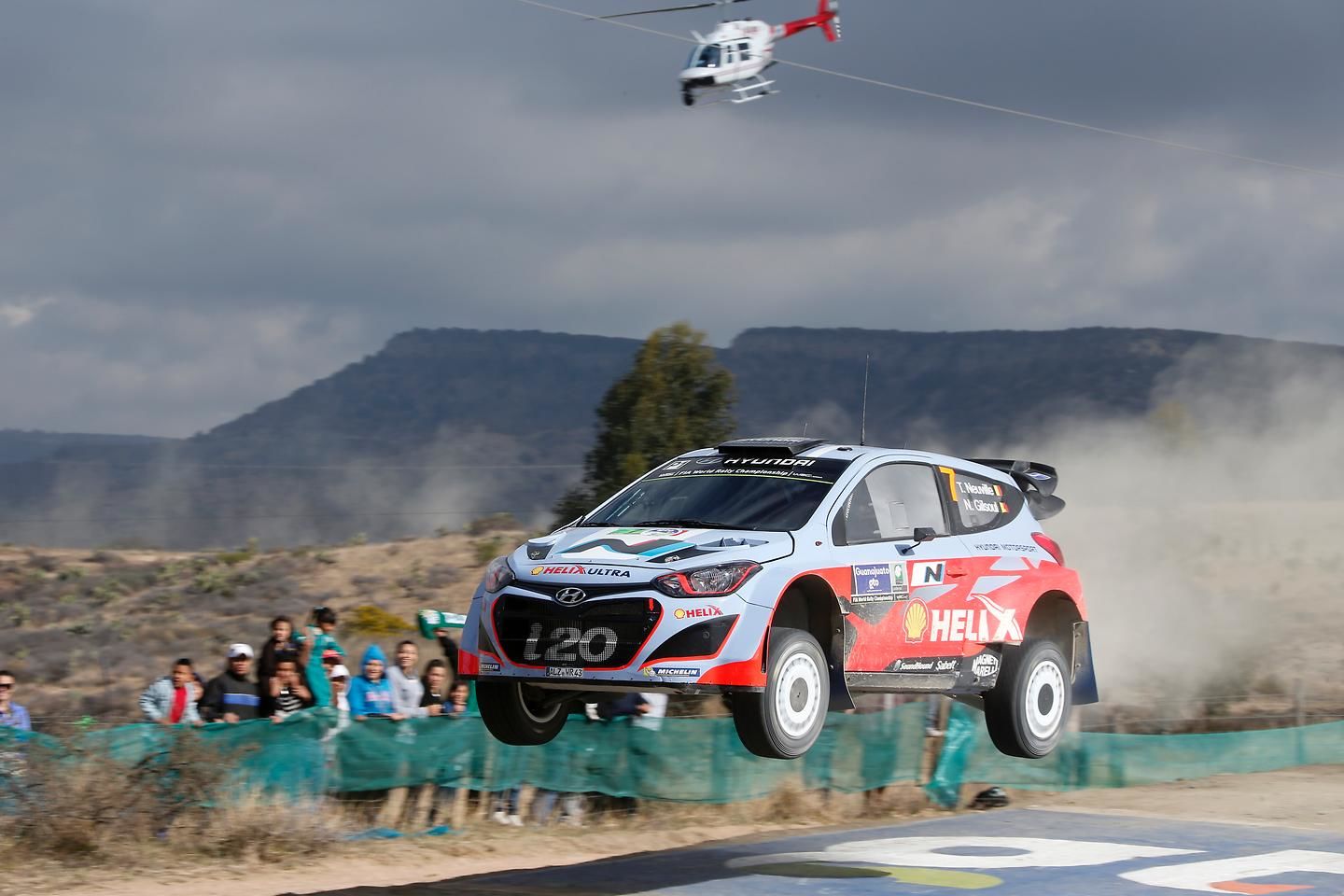 March 27, 2014 - Fresh from scoring its maiden podium earlier this month at Rally Mexico, the Hyundai Shell World Rally Team is gearing up for the fourth round of this year’s FIA World Rally Championship calendar, Rally de Portugal, which takes place next week.

As the championship returns to Europe following its trip to Central America, Hyundai Motorsport will now run three Hyundai i20 WRC cars for the first time in a WRC event with the aim of accelerating its steep learning curve in the series.

Thierry Neuville and co-driver Nicolas Gilsoul, who secured the triumphant podium in Mexico, will lead the three-car squad with the Hyundai i20 WRC #7, while Finnish duo Juho Hänninen and Tomi Tuominen will return to the wheel of the #8 car for the first time since Rally Sweden. Both crews will be eligible to score points for the Hyundai Motorsport entry.

They will be joined by Spaniard Dani Sordo and his co-driver Marc Martí who will be entered under the recently announced ‘Hyundai Motorsport N’ team, driving the Hyundai i20 WRC #20. The team will also participate with Sordo in the Fafe Rally Sprint this weekend, the spectacular appetiser to the rally, held in the Fafe-Lameirinha stage near Porto.

Based in the Algarve region in the south of the country, Rally de Portugal is considered the first traditional loose surface event of the season with its abrasive stages which combine fast and wide roads with more twisty, narrower sections and a frequent change of grip. These conditions require accurate preparation to approach the event in the best possible shape. In order to achieve this, Neuville, Hänninen, Sordo and the team took part in two separate pre-event test sessions in the region.

Despite the significant boost in confidence to the entire team following the Mexican podium, the objectives for Rally Portugal remain the same as the previous three WRC events: to continue development of the Hyundai i20 WRC and to acquire more experience in the competitive WRC environment.

Team Principal Michel Nandan said: “Our podium in Mexico was unexpected and a really good reward for everyone in the team, having worked so hard in recent months. However, we are back with our feet firmly on the ground and ready for the challenge of Rally de Portugal. We will have three Hyundai i20 WRC cars entered for the first time, which represents a good opportunity to get more feedback from the drivers and to add more mileage. The team has worked hard and done a great job once again to prepare for this rally. It was important for us to get this car built for Portugal because otherwise we would have had to wait until Italy, when we are next back in Europe, which would have lost valuable time. We have a good combination of drivers in Portugal with Thierry, Juho and Dani; each will bring their own skills and experience to help us in the continued development of the Hyundai i20 WRC. Portugal is not an easy event but we have prepared diligently with some positive testing in the region and we have seen that the Hyundai i20 WRC is reliable in those conditions. We are ready for this new challenge, although the weather remains an unpredictable but important factor to be considered.”

With a unique mix of experience, speed and consistency, the three Hyundai Shell World Rally Team crews are eager to start the Portuguese round of the WRC with the prime objective of bringing their respective Hyundai i20 WRC cars to the finish on Sunday.

Neuville commented: “Scoring a podium at Rally Mexico naturally gives us some extra confidence heading into Rally de Portugal. However, we know very well that this will be a totally different challenge. We need to be focussed at all times and help the team by getting to the finish on Sunday without any problems. We want to push a bit, of course, but the priority is to stay on the road so we can give the team as much information as possible, precisely the same goal we have had since the start of the season.”

Hänninen said: “I’m really looking forward to Rally de Portugal, my first rally on gravel with the Hyundai i20 WRC. After doing a lot of testing with the team last year and some specific preparation for this event, I have quite a good feeling with the car and I think we have a good set-up for this rally. Of course the aim for the rally is still to finish without any problems but we would be very happy if we could set some good stage times and maybe even finish in a nice position.”

Sordo commented: “I’m happy to be able to compete at Rally de Portugal; it’s an event I like a lot and where I have had some good results in the past. It’s also a very important event for the team as there will be three Hyundai i20 WRC cars for the first time. We tested for two days before the event but we have also the opportunity to do the Fafe Rally Sprint this weekend which will give me some more time in the car on loose surface.”

Rally de Portugal will get underway on Thursday 3 April from the Casino Gardens in Estoril. Before returning to the Algarve Stadium Service Park for overnight break, competitors will tackle the traditional Super Special in the country’s capital city Lisbon. The weekend’s itinerary also includes the traditional stages held on the gravel roads of Algarve and Alentejo.

About Hyundai Motor Company
Established in 1967, Hyundai Motor Company is committed to becoming a lifetime partner in automobiles and beyond. The company, which leads the Hyundai Motor Group, an innovative business structure capable of circulating resources from molten iron to finished cars, offers top-quality best-sellers such as Elantra, Sonata and Genesis. Hyundai Motor has seven manufacturing bases and seven design & technical centers outside of South Korea and in 2013, sold 4.73 million vehicles globally. With almost 100,000 employees worldwide, Hyundai Motor continues to enhance its product line-up with localized models and strives to strengthen its leadership in clean technology, starting with the world[s first mass-produced hydrogen-powered vehicle, ix35 Fuel Cell.