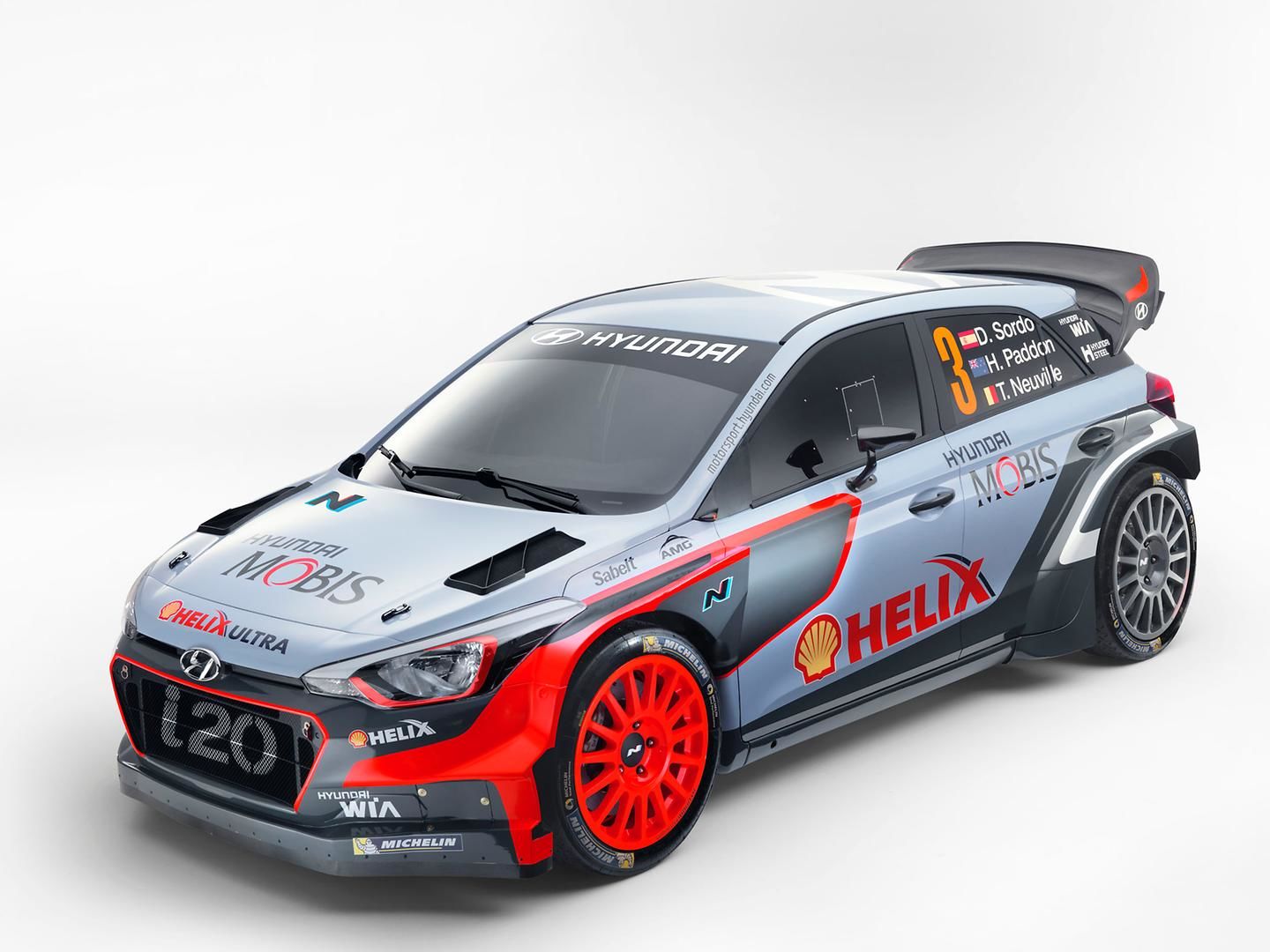 December 9, 2015 - Hyundai Motorsport has kicked off the 2016 FIA World Rally Championship (WRC) by unveiling its brand new car, the New Generation i20 WRC, in front of more than 150 assembled media and guests at the team's factory in Alzenau, Germany today.

The formal reveal of the New Generation i20 WRC marks the opening of an exciting new chapter in the short history of Hyundai Motorsport, building on two successful seasons in the competitive WRC environment. In that time, the team has undertaken a steep learning curve to establish itself as a genuine competitor against tough opposition.

Following its foundation-laying year in 2013, the team quickly developed a brand new WRC car from scratch for its first season of competition in 2014. The car proved to be both quick and reliable, securing a maiden win in Germany on Aug. 2014. From there, the team enjoyed a more consistent second season, scoring four podium finishes and fighting for second place in the Manufacturers' Championship right up to the season finale.

In early 2015, the team committed to a year-long test and development program for a WRC specification o
f the road-going New Generation i20, with its competitive debut set for Monte-Carlo 2016. The New Generation i20 has already accumulated 8,000km of testing prior to today's launch, and has proven to be quicker than its predecessor, with the team's drivers also praising improved drivability.

The new car is the result of the Hyundai Motorsport's evolution since 2013 and although the team is still young, it is far more established in the WRC community. This growth is also reflected in the team's bolder ambitions for the 2016 season, namely to fight at the front in every stage and to mount a heightened Championship assault.

Hyundai Motorsport will field three cars in every round of the 2016 Championship, with Dani Sordo, Hayden Paddon and Thierry Neuville all confirmed for a full season of WRC. From Monte-Carlo in January to a new-look season finale in Australia, while also taking in a brand new event in China, the trio of drivers will share the #3, #4 and #20 cars during the season. The precise car-driver composition will differ from event to event, offering the team full flexibility in its Championship strategy. The team will begin its third season with two New Generation i20 WRCs and one previous model at Rallye Monte-Carlo before increasing to three identical cars from Rally Sweden.

All three drivers were present at today's launch, which revealed a revised livery for the five-door New Generation i20 WRC, as it was shown off in public for the first time. The team's title partners Shell and Mobis both stand out on the new car, and will continue to be named as part of the two team entries - Hyundai Shell World Rally Team and Hyundai Mobis World Rally Team - with the livery of the latter due to be revealed in early 2016.

The team has also retained the services of rising Dutch star Kevin Abbring, who will remain as Hyundai Motorsport Test Driver. Abbring will contest selected WRC rounds in a fourth car as part of his agreement, but his primary focus will be on managing development of the team's 2017 car and R5 activities.

The R5 car is based on the New Generation i20 which will roll out in the next few weeks, falling under the banner of Hyundai Motorsport's customer racing division. There will be a development phase during the first half of 2016, homologation of the car in mid-2016, and an opening to orders in the second part of the year for private rally drivers of WRC.

Hyundai Motorsport's immediate focus, however, is on the opening rally in Monte-Carlo in Jan. 2016, where the fierce competition for 2016 season will begin in earnest.

About Hyundai Motorsport GmbH
Established on 19 December 2012, Hyundai Motorsport GmbH is responsible for Hyundai’s global motorsport activities and primarily for its World Rally Championship programme.  Based in Alzenau on the outskirts of Frankfurt in Germany, the company embarked on its debut season in the FIA World Rally Championship in 2014 with a bespoke team of skilled staff and a brand new car, the Hyundai i20 WRC. The team made a strong impression in its first year claiming podium results in Mexico and Poland, as well as a memorable 1-2 in Germany. In its second season, the team was involved in a closely fought battle for second place in the Manufacturers’ Championship, adding more podiums and stage wins to its tally. For its third season in WRC, Hyundai Motorsport is entering a brand new car, the New Generation i20 WRC, which will make its rally debut in Monte Carlo in January 2016.