NEW YORK, April 20, 2011 – Hyundai Motor America introduced the all-new 2012 Accent with best-in-class standard fuel economy and power at the New York International Auto Show today. This marks the U.S. debut of the latest version of the popular subcompact sedan and the new top-of-the line, more functional Accent five-door. The 2012 Accent is slated to hit dealerships this summer.
Accent redefines expectations in the subcompact category by offering the company’s distinctive and upscale “Fluidic Sculpture” design, best-in-class standard fuel economy, exceptional roominess and a full complement of standard safety features. Despite surprising technology and a significant increase in safety features, Hyundai will hold the line on pricing from the prior generation to continue delivering unmistakable value to customers.
“The 2012 Hyundai Accent reinvigorates the subcompact segment, similar to what the game-changing Sonata and Elantra have done in their categories,” said Mike O’Brien, vice president, Product and Corporate Planning, Hyundai Motor America. “Accent’s class-leading standard fuel economy is another showcase of Hyundai’s dedication to improving fuel efficiency with advancements to traditional gasoline powered vehicles and is the fourth nameplate in Hyundai’s lineup delivering 40 mpg on the highway.”


1 EPA estimated fuel consumption
Several other systems have been improved over the outgoing model, each contributing to increased fuel efficiency. The 2012 Accent can be equipped with a six-speed manual or automatic transaxle with SHIFTRONIC manual control, delivering smooth and efficient power delivery. Low-rolling resistance silica tires and a slippery shape (0.30 cd) reduce friction with the road and the air. This aerodynamic shape also includes a kicked up trunk edge, wheel arches which shield the tires and an optimized engine undercover. Finally, the ActiveECO function modifies engine and transmission control to smooth out throttle response. By turning on the ActiveECO function, drivers can realize up to a seven percent increase in real-world fuel economy. 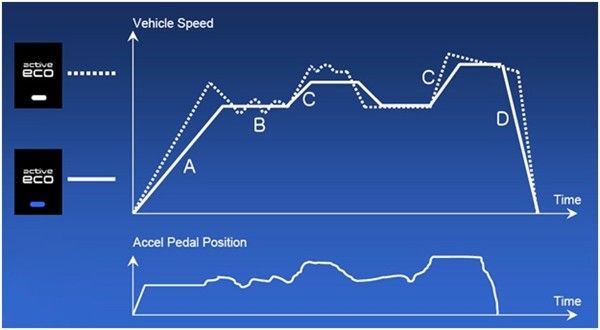 Despite the additional content, safety features and technology packed into the all-new Accent, Hyundai has avoided the typically associated penalty of increased weight. A low curb weight corresponds to an improvement not only in fuel economy but all other dynamic areas. In fact, Accent offers the best power-to-weight ratio in its class by far, providing drivers with both low fuel consumption and responsive performance. Highlights which contribute to a low curb weight include the 1.6-liter Gamma GDI engine with aluminum block that is more powerful and 40 lbs lighter than the outgoing 1.6-liter Alpha engine, monotube shock absorbers, integrated parking brake and a super flat torque converter.

Accent’s fuel economy is 30 mpg city and 40 mpg highway, with the six-speed automatic transmission or manual transmission. These figures give Accent a highway-only driving range of up to 456 miles.

SAFETY
Hyundai doesn’t believe consumers should have to pay a premium for safety, so a long list of safety features is included as standard equipment on all 2012 Accent models. A total of six airbags protect occupants in the event of a collision, including two front impact airbags, two front seat-mounted side impact airbags, and curtain side-impact airbags for front and rear passengers. Accent’s new standard front-seat active head restraints help prevent whiplash by automatically reducing the space between a front occupant’s head and the head restraint during certain rear collisions and are highly recommended by safety organizations such as the Insurance Institute for Highway Safety (IIHS). Active front head restraints are not available on Fiesta, Yaris, Aveo or Mazda2.

The Accent’s underlying structure is engineered to protect occupants using a Collision Load Dispersion mechanism and the rear doors have internal beams. The vehicle’s structure distributes the force of an impact in three ways to minimize floor deformation and maintain the integrity of the cabin.
Electronic Stability Control (ESC) and Traction Control work together to help deliver confident handling in all conditions. Vehicle Stability Management (VSM) integrates control of the ESC and motor-driven power steering (MDPS) to provide handling assistance in slippery conditions or in sudden cornering scenarios. The system can deliver up to eight Newton-meters of counter-steering effort when required to assist the driver in maintaining control of the vehicle.

A key safety element for any vehicle is its braking system. Accent is the only car in the subcompact segment to offer four wheel disc brakes as standard equipment. An Anti-lock Braking System (ABS) featuring Electronic Brake Force Distribution (EBD) and Brake Assist (BA) is also included. EBD examines the effect of vehicle load on weight distribution and apportions the braking force between front and rear axles to maximize stopping ability. In the event of a panic stop, BA ensures that maximum braking force is applied.

SMALL ON THE OUTSIDE, BIG ON THE INSIDE 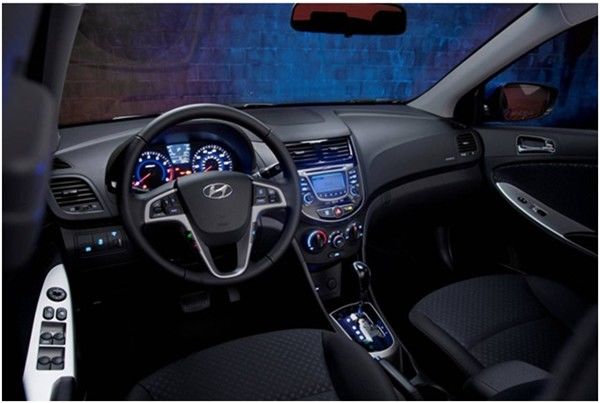 All Accents ride on a 101.2 inch wheelbase, 2.8-inches longer than the previous generation. The 66.7-inch width on all 2011 models increased by 0.2 inches for 2012. The Accent 4-door’s overall length has increased by 3.5 inches to 172 inches. Total length of the new five-door version is 162 inches. As a result, Accent enjoys superior interior volume and passenger space. While the car’s exterior dimensions are consistent with those of traditional subcompacts, Accent is classified by the EPA as a compact sedan thanks to its interior volume. Toyota Yaris and Ford Fiesta are classified as subcompact cars. In addition the Accent five-door has best-in-class cargo volume and more cargo capacity than the Nissan Juke and Infiniti EX 35 crossover. The Accent has best-in-class front and rear shoulder room and the five-door also has more cargo volume than many of its compact five-door competitors.
Five-Door Subcompact Cargo Volume Comparison

Convenient storage spaces are included throughout the cabin, including bottle holders in the front doors and a storage tray at the base of the center console. A sliding armrest storage console is available, which is a segment first. Split and fold 60/40 rear seats are standard for increased cargo flexibility when transporting longer items. Not only does Accent have multiple storage areas, but it delivers more useable storage capacity.

CONFIDENT DRIVING DYNAMICS
The first step toward confident driving dynamics is a rigid structure. To this end, the 2012 Accent employs high-tensile strength steel to deliver a strong, light and stiff body which is 22 percent stiffer than the previous generation. Increasing the stiffness of the structure allowed Hyundai engineers more flexibility in terms of suspension tuning. The end result is a better balance between handling precision and ride comfort. Accent employs a MacPherson strut front suspension with coil springs and twin-tube gas shock absorbers. The rear suspension is a torsion axle setup with coil springs and monotube shock absorbers.

All Accents have column-mounted, motor-driven electric power steering that adjusts instantly to changing driving conditions while improving fuel economy over a conventional steering system. Accent’s turning diameter of 34.1 feet is better than Versa, Fiesta and Fit. The SE five-door model has a unique steering calibration for a sportier feel. 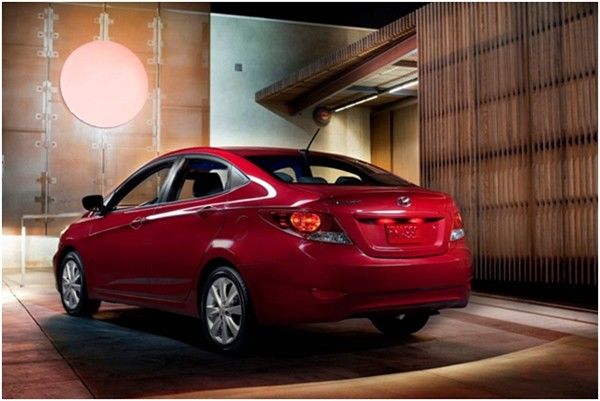 The 2012 Accent joins the Hyundai line-up sporting the company’s increasingly popular “Fluidic Sculpture” design. The vehicle’s exterior lines are intended to be futuristic, dynamic, and sleek. In a segment typically associated with staid designs, Accent stands out from the crowd. While the styling provides an attractive form, it’s also functional, featuring a slippery 0.30 coefficient of drag for Accent sedan and .31 for Accent five-door. Hyundai’s signature hexagonal front grille a 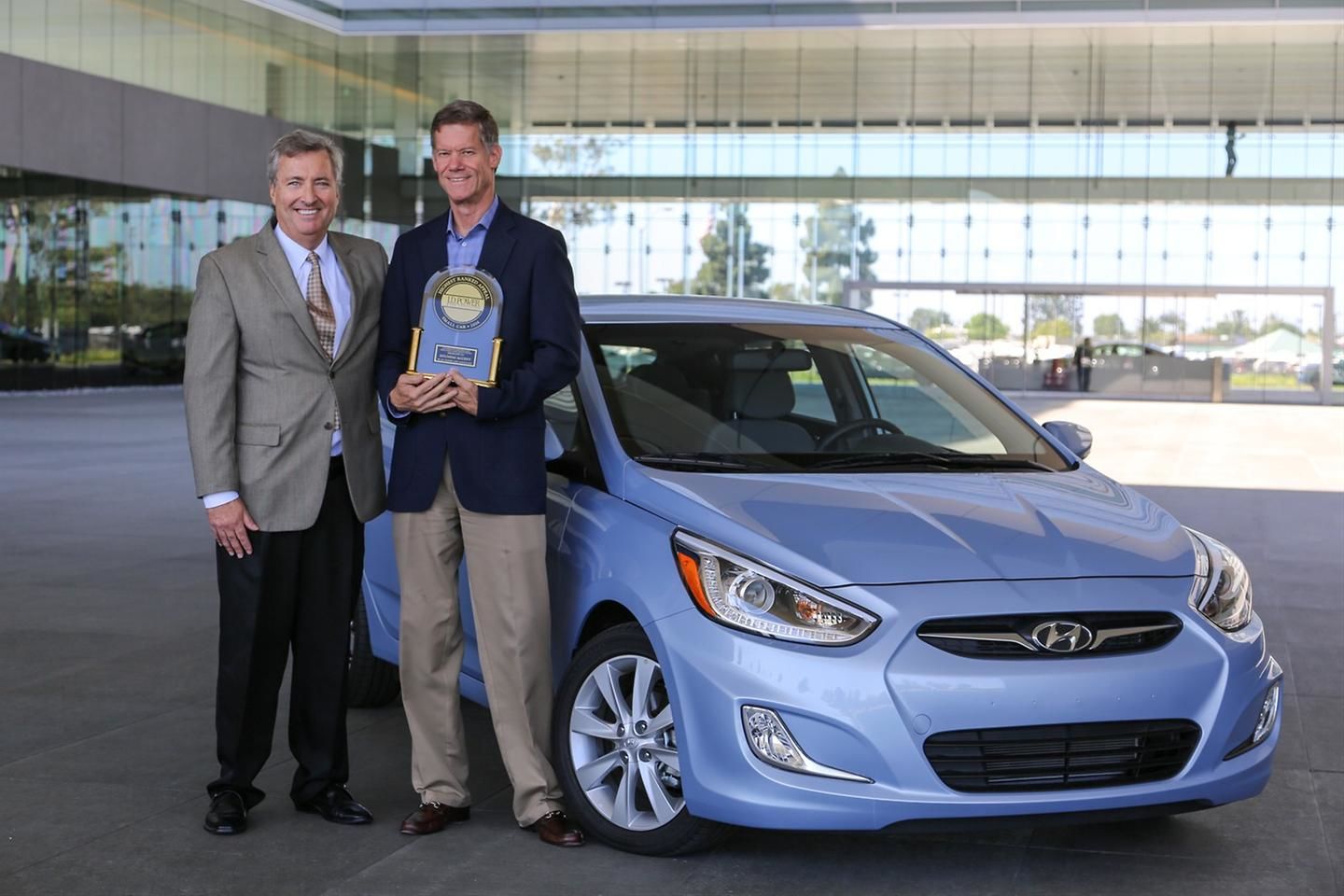