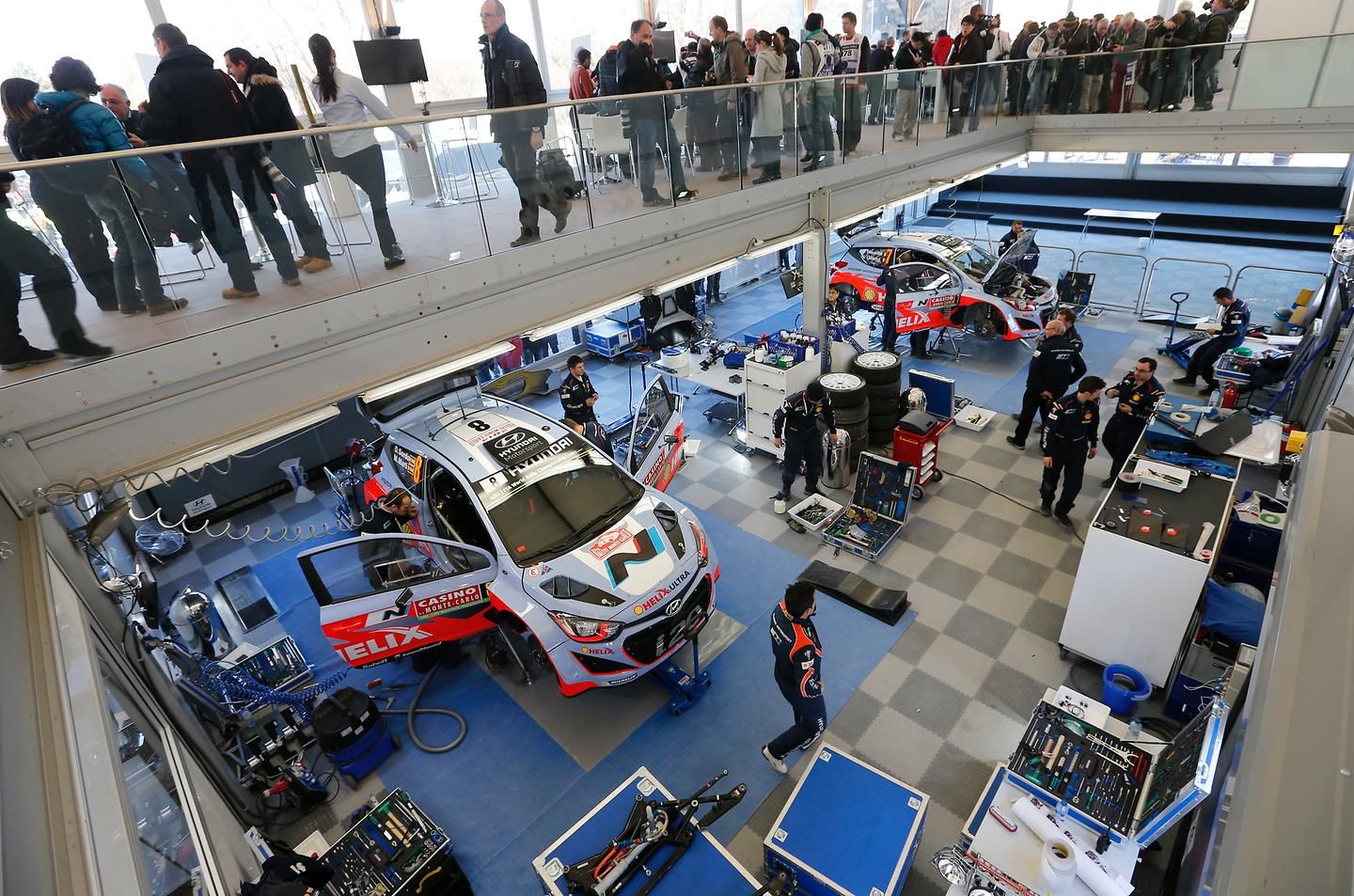 - Hyundai Shell World Rally Team to tackle Rally Sweden next week with firm objective to complete the rally
- Finn Juho Hänninen will drive the second Hyundai i20 WRC (#8), partnering the team[s lead driver Thierry Neuville (Hyundai i20 WRC #7)
- The team has prepared for Sweden with a five-day test in the Arctic Polar Circle in December and will take part in a pre-event test this weekend.


January 31, 2014 The Hyundai Shell World Rally Team is looking to continue its ambitious learning curve at the next round of the FIA World Rally Championship (WRC), Rally Sweden, which takes place next week from February 5 to 7.


Heading into only its second competitive rally outing, the Alzenau-based team will be determined to complete the challenging 24 special stages with both cars in the tough snowy conditions that participants will face in the popular Swedish event.


For the Hyundai Shell World Rally Team, still in its infancy, accumulating mileage and experience in the competitive WRC environment is of paramount importance as it seeks to further develop the promising Hyundai i20 WRC cars.


The team will see a slight change to its driver line-up for Sweden as lead driver Thierry Neuville (Hyundai i20 WRC #7, co-driver Nicolas Gilsoul) will be joined by Finnish ace and Hyundai test driver in 2013 Juho Hänninen, who will be behind the wheel of the Hyundai i20 WRC #8, flanked by his compatriot Tomi Tuominen.


The team started to prepare for Rally Sweden in early December with a five-day test in Rovaniemi, Finland, close to the Arctic Polar Circle, where both Neuville and Hänninen had a first taste of driving the Hyundai i20 WRC on snow. The test was used to identify the correct set-up for the rally and to give the drivers the right level of confidence to drive the Hyundai i20 WRC on snow at high speed. Both drivers will have an additional day of testing ahead of next week's rally.


Team Principal of the Hyundai Shell World Rally Team Michel Nandan commented: "Rally Sweden next week represents our next opportunity to develop the Hyundai i20 WRC and to collect valuable feedback and data. Sweden is a specialised event where we will face several challenges: we have to ensure the car works in the extreme low temperatures, especially on road sections where the engine is not revving as high and make sure we have a good set-up for our cars to have as much traction and stability as possible. The third main challenge is the presence of snow banks on the side of the roads it is very easy for the engines to digest snow even in the smallest collision. At Rallye Monte-Carlo, we didn't cover the mileage we were hoping for but we still learned some important lessons for the future. The objective for Rally Sweden will be once again to bring both cars to the finish and to accumulate as many kilometres and as much experience as possible," Nandan concluded.


Determined as ever after an unlucky Rallye Monte-Carlo, Neuville and co-driver Nicolas Gilsoul have only one objective for Rally Sweden: to bring their Hyundai i20 WRC to the finish: "I don't have much experience on Rally Sweden having only competed there twice before - and snow is probably my least favourite surface but it's a rally where I enjoy a lot driving and where we got a good result last year (fifth place). It's a unique rally - very fast, with narrow roads and big snow banks alongside the roads. We tested for a couple of days for Sweden back in December where we got the first feeling of driving the Hyundai i20 WRC in full winter conditions. We also started to work on set-up solutions for this specific event. We will have another day of testing at the weekend which will allow us to do some final adjustments and cover some more kilometres ahead of the rally. After retiring at Rallye Monte-Carlo so early in the competition, Nicolas and I are really looking forward to get a fresh start and we want to finish Rally Sweden for ourselves and for the entire team," he said.


Hänninen who clinched his best WRC result to date at Rally Sweden last year &ndash has four previous starts to his credit on this event which will mark his competitive debut within the Hyundai Shell World Rally Team: "I'm very proud to have the chance to drive for the Hyundai Shell World Rally Team at Rally Sweden. I was already privileged to be the first behind the wheel of the Hyundai i20 WRC back in May 2013 but being in Sweden with the team will feel even more special. It will be my first event within a WRC factory team and, for sure, it will be a special moment that I will remember for a long time. Rally Sweden is one of my favourite events. For a Finn, to drive on snow is almost a natural thing so of course we would like to get a good result but the main target for Tomi and I will be to finish the event and get as much experience as possible for the team &ndash which will be helpful for the rest of the year and for 2015 when we will put into practice what we learned during our first season in competition."


Traditionally, the only true winter event on the WRC calendar, Rally Sweden will take the competitors to the forests of the Värmland region, crossing the border for two stages in Norway. To best cope with the extreme conditions, Hyundai Shell WRT[s partner Michelin will supply winter tyres fitted with over 380 tungsten-tipped studs which ensure perfect grip on the hard frozen surface underneath the soft snow. Meanwhile, drivers handle the cold with anti-glare glasses and heated boots. This year[s edition of Rally Sweden includes 24 special stages (12 repeated twice), covering a total of 323.54 competitive kilometres.

More information about Hyundai Motor and its products can be found at: Twitter : @hmcglobalpr,
http://worldwide.hyundai.com or http://www.hyundaiglobalnews.com

About Hyundai Motorsport GmbH
Established on 19 December 2012, Hyundai Motorsport GmbH is responsible for Hyundai[s global motorsport activities and primarily for its World Rally Championship programme. Based in Alzenau on the outskirts of Frankfurt in Germany, the company is embarking on its debut season in the FIA World Rally Championship in 2014 with a bespoke team of skilled staff and a brand new car, the Hyundai i20 WRC.