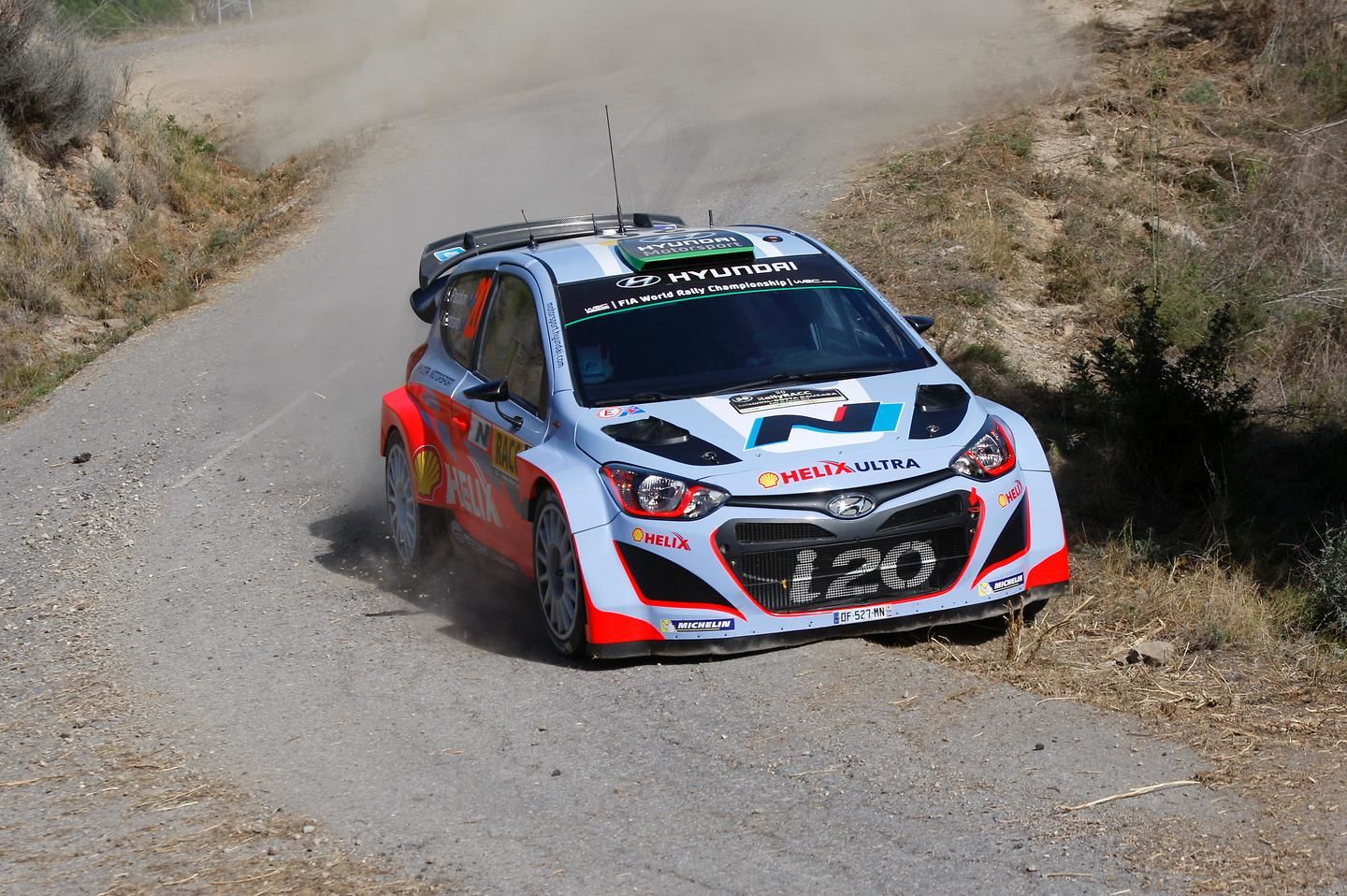 
- Hyundai Shell World Rally Team will bring its debut season in the 2014 FIA World Rally Championship (WRC) to an end at Wales Rally GB next week, the final round of the year

November 7, 2014 – The Hyundai Shell World Rally Team is set to embark on the last challenge of its maiden season in the FIA World Rally Championship (WRC), Wales Rally GB – the 13th and final round of the series - next weekend.

The Deeside-based event marks the return of the WRC to full gravel after a mixed-surface round at RallyRACC – Rally de España last month. For the last event of the season, the Hyundai Shell World Rally Team will once again field three Hyundai i20 WRC cars with Thierry Neuville and Nicolas Gilsoul as lead crew in car #7. Finns Juho Hänninen and Tomi Tuominen will join the team for the final round of the WRC behind the wheel of the #8 Hyundai i20 WRC, while Hayden Paddon and co-driver John Kennard will be representing the Hyundai Motorsport N team with the #20 car.

With a new base in Deeside in North Wales since 2013, Wales Rally GB is one of the oldest and most legendary rounds of the WRC, having been run for the first time back in 1932. It has been part of the Championship’s calendar since its inaugural season back in 1973. The Welsh roads are characterised by their fast, muddy, slippery nature and form some of the most technical and challenging stages of the entire calendar.

The Alzenau-based team was in Wales last week to prepare for the rally with a five-day test with all three drivers to ensure the trio of Hyundai i20 WRC cars have the best set-up possible to tackle the rally next week.

With the end of the season rapidly approaching, the Hyundai Shell World Rally Team will be looking for another positive result, to continue the development of the Hyundai i20 WRC car and the team for the future.

Team Principal Michel Nandan said: “Wales Rally GB is a difficult event with a lot of parameters that can be hard to predict. It can be very muddy and very foggy and when the conditions are tricky it can suit better our Hyundai i20 WRC. We have seen that when it’s down to pure performance and speed we have, perhaps understandably, lacked a little bit in our first season but when the conditions are more demanding we can close the gap and play a little bit more at the front – we will then aim for a top five finish. With Thierry, Juho and Hayden entered for Rally GB we have three drivers with a good level on gravel. We have seen in the past that Juho goes well when the conditions are not so easy. Thierry had a very strong result in GB last year and Hayden is showing more and more speed as he continues his progress. Wales Rally GB is an event he knows well so we would like to think he’s capable of doing something special.”

This will be Neuville’s third appearance at Wales Rally GB, a rally which holds special memories for the young Belgian as he clinched second place in the WRC there last year.

Neuville said: “It feels special to go back to Wales Rally GB for Nicolas and I, as we were crowned vice-Champions there last year. For this year, we will make our best to finish the event without any problems but also trying to keep a good rhythm and set some good times with our Hyundai i20 WRC. Wales Rally GB is certainly not an easy one; the grip is changing constantly and it’s very important to have a good recce and pace notes. Sometimes it’s wet and there’s a lot of grip, which can make it muddy hence very slippery straight away. We could also have some ice patches at this time of the year so all in all it’s a big challenge.”

Finn Hänninen returns to Wales Rally GB after a few years away but he’s well aware of what to expect from the Welsh forests and after a good test to prepare for the event, he’s ready for another outing with the Hyundai Shell World Rally Team.

Hänninen commented: “It feels good to be back in the Hyundai i20 WRC after a couple of months. We had a really good test for Wales Rally GB and I think we’re well prepared to tackle the stages next weekend. My last time in GB was back in 2008 and I had almost forgotten the variety of surface conditions you can find there due to the constant change of grip. The stages are fast and flowing and you can keep a good rhythm but it’s important to have a smooth and clean line to keep the speed on – I really like these stages. Of course I haven’t competed in most of them – as the rally now is much northerly - but we will try to have a good recce and prepare as much as we can.”

Wales Rally GB brings some good memories to young Paddon as well being the first event he contested outside New Zealand back in 2007. After winning his first WRC stage at Rallye de España last month, the Kiwi is well-determined to continue his progress in the WRC.”

Paddon said:  “Wales Rally GB has some similarities to New Zealand. Generally the stages are similar to some of the forestry roads we have back home, flowing and not rough. Because it’s primarily a winter sport in New Zealand it’s often a bit cold and wet like what we tend to find in Wales. We had a good test in Wales last week to get the Hyundai i20 WRC dialled into the slippery conditions we are anticipating. I do like Wales Rally GB because the grip levels are quite consistent although it’s always hard to judge until you get on the stage and compare times.”

A compact three-day route divided up into 23 challenging stages, totalling just over 305 kilometres, makes Wales Rally GB a perfect ending for the 2014 WRC season. The main features of the rally include a ceremonial start in Colwyn Bay on Thursday 13th November, a remote service in Newtown on Friday 14th November as the drivers tackle some familiar stages in mid-Wales. Two spectacular stages will be run after sunset on Saturday 15th November as well as one of the three Super Special Stages included in the itinerary (Chirk Castle and Kinmel Park).

AbAbout Hyundai Motor
Established in 1967, Hyundai Motor Company is committed to becoming a lifetime partner in automobiles and beyond. The company, which leads the Hyundai Motor Group, an innovative business structure capable of circulating resources from molten iron to finished cars, offers top-quality best-sellers such as Elantra, Sonata and Genesis. Hyundai Motor has eight manufacturing bases and seven design & technical centers worldwide and in 2013, sold 4.73 million vehicles globally. With almost 100,000 employees worldwide, Hyundai Motor continues to enhance its product line-up with localized models and strives to strengthen its leadership in clean technology, starting with the world’s first mass-produced hydrogen-powered vehicle, ix35 Fuel Cell.