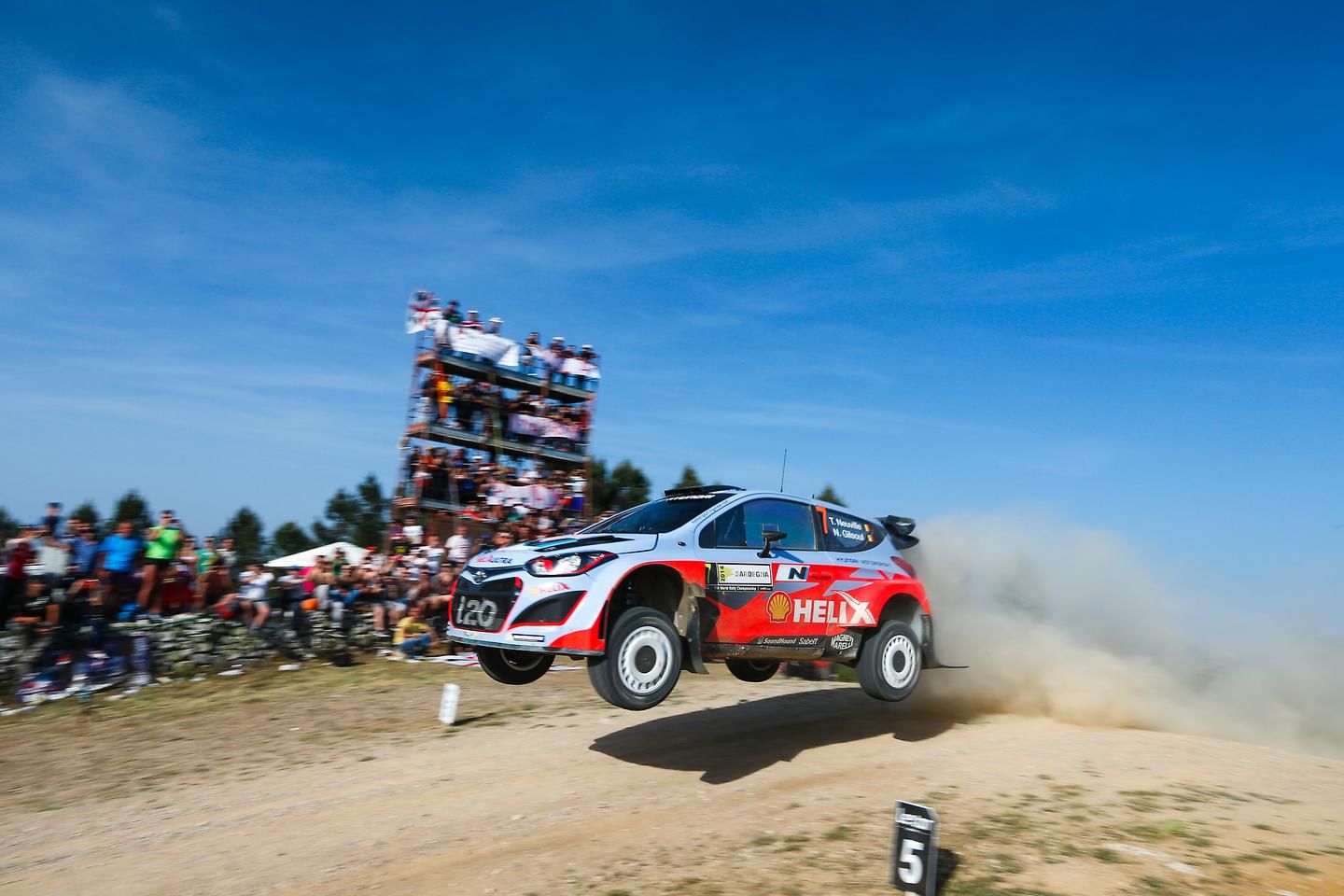 June 23, 2014 – The Hyundai Shell World Rally Team will continue its learning curve in the competitive WRC environment at a new-look event for the championship, Rally Poland, this weekend. The team, which experienced a challenging and ultimately productive Rally Italia Sardegna just a few weeks’ ago, is looking forward to learning more about its ever-evolving Hyundai i20 WRC car at another gravel event, with three cars entered once again.

Thierry Neuville and Nicolas Gilsoul will spearhead the team’s assault on Rally Poland in the #7 car, joined by Finnish pair Juho Hänninen and Tomi Tuominen in the #8 car and Kiwi crew Hayden Paddon and John Kennard in the #20 car entered by Hyundai Motorsport N.

This year’s event will be the 71st running of Rally Poland but it is returning to the WRC for the first time since 2009, running stages in Poland and Lithuania over 21 stages totaling 350km. The event, like Rally Italia Sardegna, will incorporate a remote service that will put added pressure on teams and drivers as they negotiate unknown and unfamiliar routes.

For Hyundai Shell World Rally Team, the objectives remain, as at all previous rallies, for all cars to complete the rally and to accumulate experience of the new terrain with the Hyundai i20 WRC car. The team tested in Poland after Argentina with all three driver crews taking part; Neuville and Hänninen drove on two days and Paddon on one day. The team also used Rally Italia Sardegna to prepare for this weekend’s rally with some of the road sections in the last event expected to be similar to those faced this weekend.

Team Principal Michel Nandan said: “We were able to take a number of positive elements away from Sardegna, including our first 1-2 stage wins. I feel that we are stronger as a team as a result of the experience of that event, which was certainly not an easy rally. Poland will be another new event for us and in fact quite new territory for everyone. It hasn’t been on the calendar for many years and a lot of the stages are completely new – including those in Lithuania which is a completely new country for WRC to visit. On Rally Poland, the stages are fast with a sandy surface so we need to have good traction. We carried out some important work on suspension and differential settings in between Argentina and Sardinia, which will be important for this weekend. It will not be easy but that is why we are here: to learn. We have three cars again with the same driver line-up so we will be able to pick up from where we left off in Sardinia – and aim to get all cars to the finish of the rally.”

Neuville and Gilsoul demonstrated strong pace during Rally Italia Sardegna, which saw them claim a stage win on Friday, so will be hopeful of another strong event in the #7 Hyundai i20 WRC. Neuville said: “Although Sardegna did not go to plan, we were still able to make some good discoveries for the future and we will use that experience this weekend in Poland. We tested there after Argentina with the Hyundai i20 WRC and the gravel roads are sandy and soft in nature, so it’s a new type of road surface for me. I expect it could be quite tough on the car but I am sure it will be nice and fast to drive on. We will have to see what the weather conditions are like but whatever happens, our aim is to go out there and get another good result for the Hyundai Shell World Rally Team.”

Hänninen and Tuominen also scored a stage win in Sardegna and briefly led the rally (their first in WRC). The Finns will be looking to put the disappointment of their Sardinia crash behind them as they aim to register a rally finish in their #8 Hyundai i20 WRC. Hänninen said: “Tomi and I were obviously disappointed with the outcome of Sardegna but we are pleased to be going to Poland where we will be able to get back into WRC action. It looks likely to be another tricky event but we have some recent testing experience from Poland which will be helpful. It is a new event for many people and it will be good to go to a new country when we have the Lithuania stages. We had some positives from the start of the rally in Sardegna, so for Poland I want to make sure we complete the rally and support the ongoing development of the car and the team.”

The Kiwi crew of Hayden Paddon and John Kennard had a strong debut event with the Hyundai Shell World Rally Team and will be hoping to accelerate their own learning curve in the #20 car (Hyundai Motorsport N). Paddon said: "I am really looking forward to Poland. I always prefer fast events and since it is an event that has not been in the championship for five years, it’s more of a leveller for a driver like me with less experience. We did a small test in Poland several weeks ago and from this we could see the roads are very fast, but also quite soft in places. We will be expecting rougher conditions on repeat stages, which will make it difficult, so we will have to make the most of the first pass on the stages. Since Sardegna, I have also analysed the data with my engineer and have identified two key areas that I will work on with my driving. We will go into the event trying some parts on the car for the first time but both my engineer and I are confident this will help me get a better feeling for the car in rally conditions. We have had our taster in Sardegna, now we are ready to step it up and try and get closer to the other Hyundai i20 WRC cars."

Rally Poland marks the halfway point of the 2014 season, round seven of 13, and represents the first time that the event has appeared on the WRC calendar since 2009. Rally Poland itself is one of the world’s oldest rallies, having hosted its first event in 1921. It featured in the first WRC season in 1973 but left the calendar to become a European Rally Championship event. A one-off return in 2009 was the last time that WRC visited the country. This year’s event will take in two countries with WRC visiting Lithuania for the first time. It will be the 32nd different country to have staged a WRC event in the championship’s history.

The schedule will take in three stages on Thursday including one in the dark. Friday will see a remote service in Lithuania with four stages in the country, two either side of the service. The event will have four Super Special Stages held at the Mikolajki Arena in Poland, one on each day of the rally. All in all, it will be a step into the unknown for most teams and drivers but a challenge that Hyundai Shell World Rally Team is relishing as part of its learning year in the WRC.

About Hyundai Motor Company
Established in 1967, Hyundai Motor Company is committed to becoming a lifetime partner in automobiles and beyond. The company, which leads the Hyundai Motor Group, an innovative business structure capable of circulating resources from molten iron to finished cars, offers top-quality best-sellers such as Elantra, Sonata and Genesis. Hyundai Motor has seven manufacturing bases and seven design & technical centers outside of South Korea and in 2013, sold 4.73 million vehicles globally. With almost 100,000 employees worldwide, Hyundai Motor continues to enhance its product line-up with localized models and strives to strengthen its leadership in clean technology, starting with the world’s first mass-produced hydrogen-powered vehicle, ix35 Fuel Cell.
More information about Hyundai Motor and its products can be found at: http://worldwide.hyundai.com   or http://www.hyundaiglobalnews.com