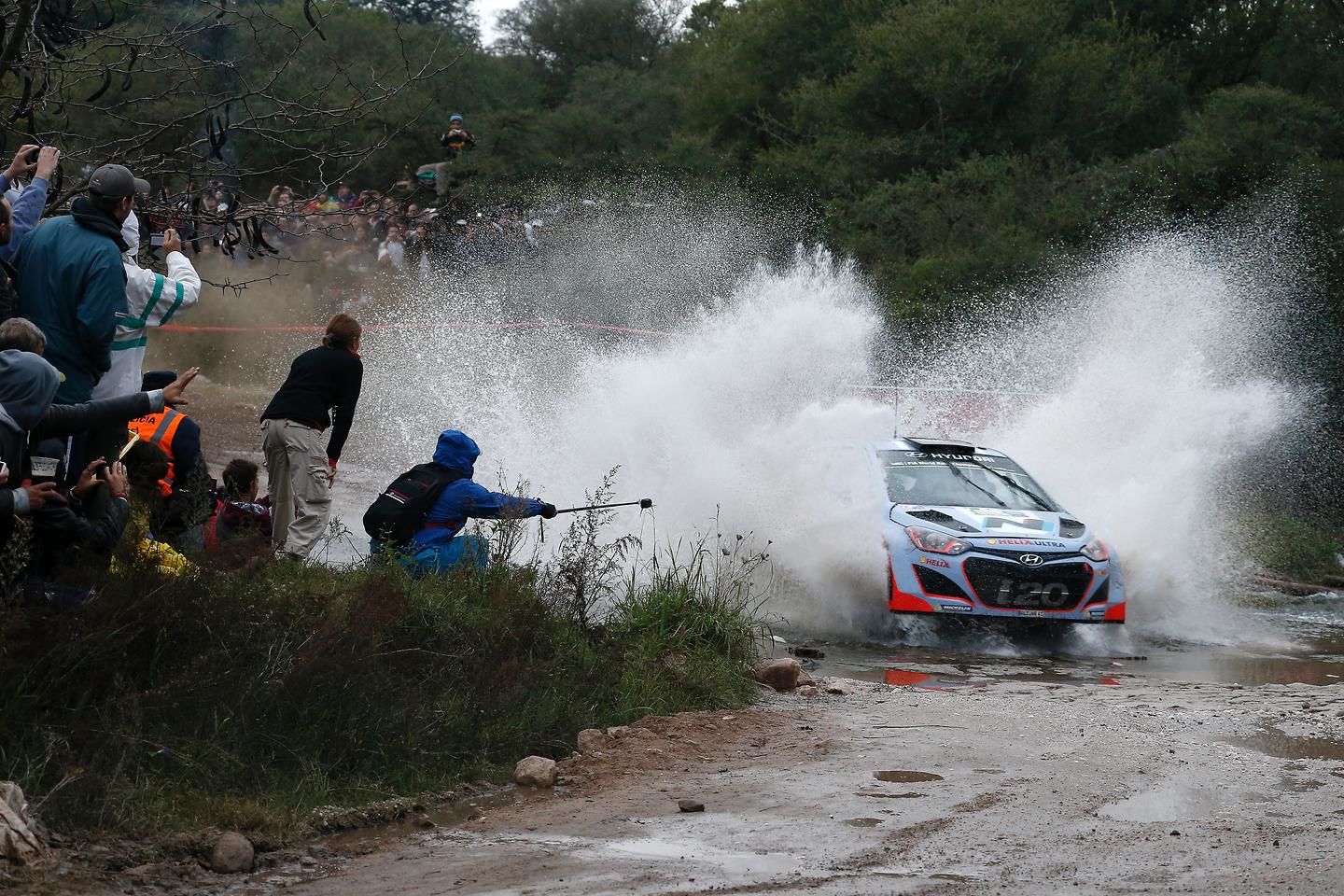 June 2, 2014 – Hyundai Shell World Rally Team will contest this weekend’s Rally Italia Sardegna from June 6 to 8, round six of the 13-event FIA World Rally Championship (WRC), with three cars as it tackles brand new territory with the ever-evolving Hyundai i20 WRC car.

New Zealand driver Hayden Paddon will be making his debut with the Hyundai Shell World Rally Team alongside his co-driver John Kennard for the first round of a seven-rally campaign with the team behind the wheel of the Hyundai i20 WRC #20. The Kiwi duo will be scoring points for the Hyundai Motorsport N entry.

Sardegna will offer another new challenge for the Hyundai Shell World Rally Team following the rigours of Argentina, in an event where the Hyundai i20 WRC has yet to turn a wheel. The stages are characterised by their technical and varied nature, featuring fast but narrow roads which leave no room for error, as well as spectacular water splashes and breath-taking jumps.

The Hyundai Shell World Rally Team has prepared for Sardegna with a comprehensive test in the north of Portugal in March with Neuville and Hänninen tackling similar terrain to what will be faced this weekend. Paddon, meanwhile, had his first taste of the Hyundai i20 WRC on gravel at a test last month.

Team Principal Michel Nandan said: “We are looking forward to putting the Hyundai i20 WRC through its paces at another new event for our young team. It is also a pleasure to welcome Hayden and John into our squad for the first of seven events. Hayden is a very promising young driver with huge potential and we are pleased to offer him the chance to compete. I am excited to see him grow alongside the team as our debut season continues. This will be another demanding event for us as we understand the nuances of Rally Italia Sardegna; it is a tough event so our main aim for the three crews will be to take care and avoid making mistakes. This approach will allow us to maximise our learning from the event. We are of course hoping to score more points and to continue the development of the Hyundai i20 WRC, which is improving in all areas rally to rally. We can’t forget that this event comes one year on from the official opening of our Alzenau facility – it is truly incredible to see how far we have come in the space of the past twelve months.”

Hyundai Shell WRT lead driver Neuville put in a fighting performance at the previous round in Argentina, clinching a solid fifth place. The Belgian is determined to add to the team’s learning curve at Rally Italia Sardegna with another strong finish.

Neuville said: “Rally Italia Sardegna is quite tough; stages are technical and quite narrow making it very easy to make a mistake. There can be stones on the line which you need to take care about that can make things even more difficult. We had a good result here last year and we know the event quite well now having contested it three times previously. We will make the most of this event to continue to building the experience together with the team and of course we will look at bringing home some positives from Italy for the remainder of the season.”

Winner of Rally Italia Sardegna in 2010, when the event was part of the Intercontinental Rally Challenge, Hänninen is eager to make a positive return behind the wheel of the Hyundai i20 WRC this weekend.

Hänninen commented: “Rally Italia Sardegna is an event I know quite well, I have been there four times before and I won it back in 2010. It’s a demanding rally with warm weather and a lot of grip changes. Surface can be hard in some places and sandy and quite slippery in other places. It’s also very narrow which makes it very easy to make a mistake. We carefully prepared for this event and for sure we will do our best to help the team to get as much feedback as possible to develop the Hyundai i20 WRC.”

On his first outing with the Hyundai Shell World Rally Team, Paddon has clear goals for Rally Italia Sardegna alongside his compatriot co-driver. He said: “We’re delighted to be joining the Hyundai Shell World Rally Team, it’s an incredible opportunity and I’ll work very hard to make the most of it. This will be my first time in Sardegna so I’ve been studying a lot of videos online to prepare for it. I know that the stages are narrow and twisty and there could be some rocks on the road so we need to keep out of trouble. Being my first event we will focus on getting to the finish and then, show progression on each throughout the season.”

Celebrating its 10th edition this year, Rally Italia Sardegna moves from Olbia to the west coast town of Alghero where the Service Park and Rally Headquarters will be based. The event will kick off on Thursday 5 June with a Super Special Stage hosted in the island’s capital Cagliari followed by three gruelling days of competition divided into 17 stages. This year competitors will tackle 372km of special stages – including 75km of new roads compared to 2013. The main challenges of this year’s edition are the two runs through the massive 59.13km Monte Lerno stage, the longest in the Championship so far.