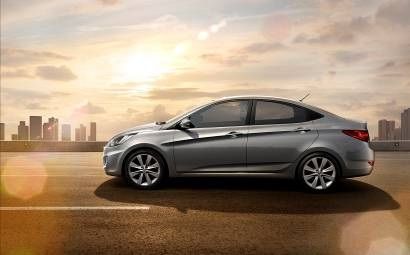 Hyundai Solaris has won the prize "Car of the Year 2012" in Russia in the category "Novelty" and "Small class".
The "Car of the Year 2012" has a nationwide character, and brings together people who are active in relation to the automotive theme and everything connected with it.
Winning of Hyundai Solaris model in Russian Award "Car of the Year" is a significant event for the company and confirms its status of a most popular car in the Russian market. Since its launch in early 2011 Hyundai Solaris has already gained recognition by consumers and experts from the automotive industry as evidenced by numerous awards and prizes. In 2011 Solaris has been awarded the "Golden Klaxon" in the "compact car" nomination and the Grand Prix of the magazine "Za rulem" in the "Small class" nomination, as well as it became the winner of "The best launch" nomination of Russian Automotive Forum Adam Smith. March 14, 2012 Hyundai 's bestseller won the prize "Best Car of the year for Runet version" in the "City Car" nomination.

Immediately after entering the market model has become in demand from Russian car motorists. This is the first strategic model of the company in Russia. Designed to meet the wishes of Russian consumers and fully adapted to road and weather conditions in Russia, Hyundai Solaris managed to win recognition of motorists in record time. Modern design, new engines and a magnificent interior ergonomics are perfectly combined in the model, and the capacity and efficiency make it ideal for young families. Car sales have grown rapidly, and in April Solaris became the most popular foreign car in the domestic market. After just three months the number of vehicles sold reached 50000 . In January 2012 100000th Hyundai Solaris was sold, and in March Solaris accumulate sales reached 120 000 vehicles.

In early 2011 the company plant in St. Petersburg started its work. One of the purposes of “Hyundai Motor Manufacturing Rus” construction is the formation of local production facilities in Russia, which has strengthened the position of the company and the CIS markets.

"Hyundai Motor Manufakturing Rus" is the first foreign car factory of full cycle in the Russian Federation. At the site, in addition to traditional shops welding, painting and assembly, is also stamping shop. The level of localization reaching 45% is also one of the highest in the market.

"Hyundai Motor Manufakturing Rus" is equipped with modern high-tech equipment. At the present time there is available a model Hyundai Solaris in sedan and hatchback. In mid-August 2011 to meet the high demand for the model of the conveyor earned in three shifts.

The plant produces high-quality cars. To achieve this goal has been established automated equipment, in addition, were recruited talented employees who have been training at foreign factories, during which they have perfected their skills.