with Launch of Sonata 2.4 GDI

(Seoul, Korea)  Taking one step closer to its goals of leading the industry in fuel economy, Hyundai Motor Company today launched its new Sonata 2.4 GDI in the Korean market, its first Gasoline Direct Injection engine whose superior performance puts Hyundai at the top of the mid-size segment.

Equipped with the new 2.4 Theta II GDI, the new Sonata generates 201ps@6300rpm of horsepower and 25.5kg.m@4250rpm of peak torque while delivering fuel economy rating of 13km/l.  The 13km/l figure is 0.2km/l better than the smaller displacement 2.0-liter Theta II which serves as the base engine for the Sonata. (See attached file for direct comparisons with Camry and Accord)

Hyundai is the first non-luxury automaker to bring GDI to the mid-size segment. Representing the biggest advance in fuel injection, an ‘80s technology that replaced the carburetor, GDI puts Hyundai at the cutting edge of engine design and management by achieving three seemly incompatible goals:  GDI lowers emissions while raising power output and improving fuel economy.  Prior to GDI, a gain in one area came at the expense of the other two.

One serious limitation of conventional fuel injection is that as engine revolutions increase, the valve opening and closing times get progressively shorter, thus reducing the time available to inject fuel.  GDI avoids this problem altogether by positioning the fuel injector in the most optimal location, directly inside the combustion chamber to offer unparalleled precision.  With this shorter and more direct path, far greater control is attained over the combustion process: A high pressure fuel pump injects the fuel at pressures of up to 150 bar, in precise amounts and intervals.

The injection is split into two phases to achieve optimum combustion: in the first phase, the pilot injection and ignition trigger the piston's downward power stroke.  Then, in the main injection phase, during the piston's descent, more fuel is injected and is ignited.  This split-injection technique reduces loading on the catalytic converter and helps lower emissions.  This is particularly beneficial during cold starts when emissions are highest because the catalyst has not reached its optimal operating temperature.  Split-injection enables the catalytic converter to reach the optimal operating temperature faster thus reducing emissions by 25 percent during cold starts and meet’s California Air Resources Board’s ULEV-2 and PZEV standards

GDI has been applied to the second generation of Theta:  Theta II features numerous design enhancements over its predecessor starting with the application of a two-stage variable induction system (VIS) which improves engine "breathing," automatically adjusting the volume of the air sucked into the combustion chamber to create the "optimal" air-to-fuel mix under different engine load conditions.

Further performance gains were made possible by incorporating Dual Continuously Variable Valve Timing (DCVVT) which improves engine breathing on the intake and exhaust sides for better fuel economy and lower emissions.  Depending on engine load and speed, DCVVT can extend or shorten the duration of the valve opening and closing for more power and lower emissions.  And the DCVVT system is governed by a new steel chain with an innovative roller and tooth designed for silent operation and durability. 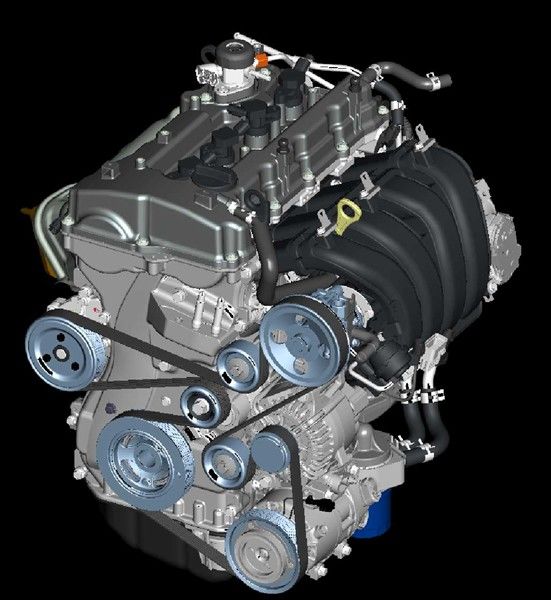 While DCVVT and VIS improve power output, engineers have also come up with several important weight saving innovations.  Special attention was focused on the bulkhead, the area of the aluminium cylinder block accumulating the highest stresses:  Reinforcement yielded a stiffer block without incurring a weight penalty.  A redesign of the crankshaft (semi-eight-balance type) led to an equally important weight reduction.  The catalytic converter is also lighter thanks to a new canning process which allows for the use of thinner gauge stainless steel and requiring far less welding.

Another major engineering challenge was to reduce internal friction to attain better fuel economy.  Friction reduction measures include a revision of the piston pin from a fixed-type to a full-floating design which cuts down on friction between the piston and cylinder wall.  And under the piston crown, engineers have added a cooling jet which sprays oil over the piston walls reducing friction and contributing to an improvement in fuel economy.

The engine is mated to Hyundai’s new six-speed automatic.  Representing the top-end of the line, the new Sonata 2.4 GDI will retail from 28.6 million to 29.9 million Korean won.

GDI application will subsequently be expanded across the gasoline engine family and applied to other Hyundai models.

Established in 1967, Hyundai Motor Co. has grown into the Hyundai-Kia Automotive Group which was ranked as the world’s fifth-largest automaker since 2007 and includes over two dozen auto-related subsidiaries and affiliates.  Employing over 75,000 people worldwide, Hyundai Motor sold approximately 2.8 million vehicles globally in 2008, posting sales of US$25.6 billion on a non-consolidated basis (using the average currency exchange of 1257.5 won per US dollar).  Hyundai vehicles are sold in 193 countries through some 6,000 dealerships and showrooms. Further information about Hyundai Motor and its products are available at http://www.hyundai.com

prev
Sonata 2.4 Gdi Versus The Competition
next
Hyundai Donates Us$100,000 To Help Quake-Stricken Haiti