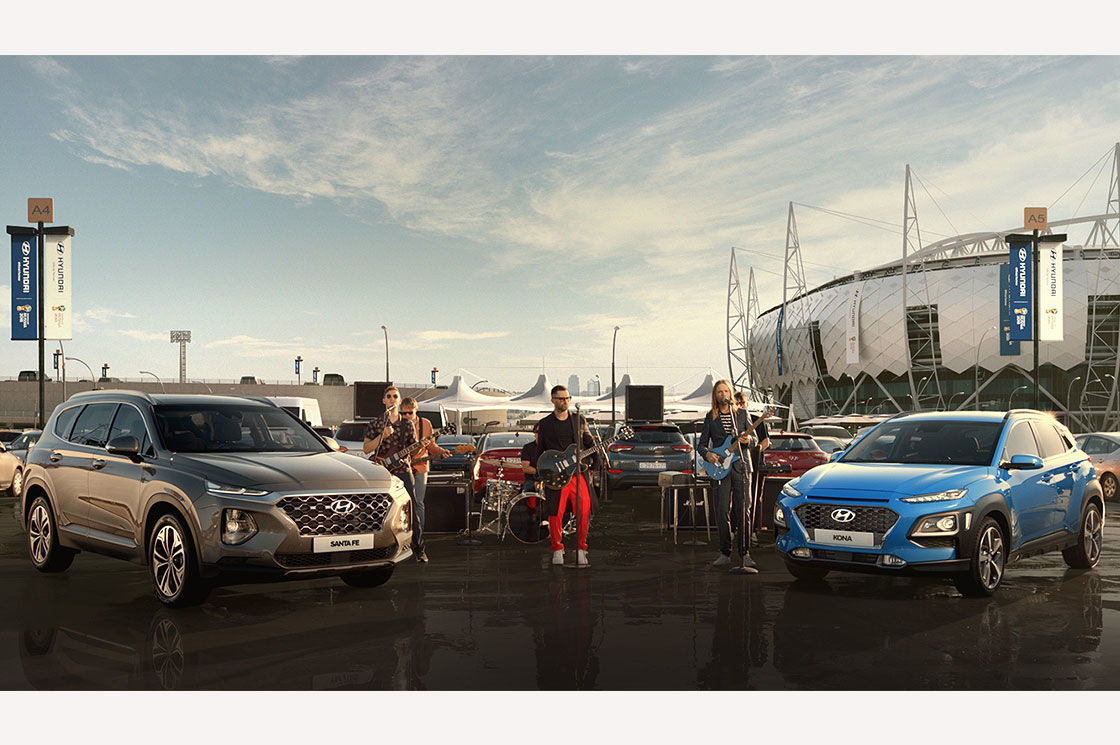 SEOUL, June 11, 2018 – Hyundai Motor, the Official Partner of the 2018 FIFA World Cup Russia™, has enlisted multi-platinum GRAMMY Award winning band Maroon 5 to record a version of Bob Marley & The Wailers iconic feel-good anthem ‘Three Little Birds’. Through the song, Hyundai will communicate that its smart technology means consumers can forget their worries and enjoy a positive driving experience both in and out of the car.

The television advert, which highlights Hyundai’s smart technology will be broadcast during the 2018 FIFA WORLD CUP RUSSIA ™. It was shot against a football stadium backdrop and shows the band performing their version of Three Little Birds.

The smart technology that features in the commercial incudes Forward Collision Avoidance Assist which prevents a driver bumping in to a bus outside the football stadium and Safe Exit Assist which automatically locks the doors when trying to opening them in order to secure passenger safety in vehicle.

Automotive manufacturers are making more safety features available in a bid to aid more convenient driving. To celebrate and embrace these changes, Hyundai has launched a new campaign for 2018 to communicate its brand messaging.

The music video was shot in a reggae designed world created to showcase the soul of a Maroon 5 performance. The silhouettes of the band are formed from natural materials including wood, stone, feathers and jewels, intercut with male and female reggae dancers bringing energy to the music.  The dancer’s bodies are then transformed into hundreds of miniature models of Hyundai’s new fuel cell electric NEXO, driving in time to the beat, before being defined by beams of headlights illuminating their figures against a darkened background.

Maroon 5 said: “Bob Marley is one of the greatest artists in the history of music, he is truly a genius, so we were excited to be given the opportunity to cover ‘Three Little Birds” for Hyundai’s new campaign.”

With its laid back, positive vibes, Three Little Birds is the perfect song to encourage football fans to focus on the tournament as a whole; embracing it as a celebration of sport, rather than experiencing the highs and lows of each match.

Head of Marketing Division, Hyundai Motor Company, Minsoo Kim said: “Hyundai has a long-standing history in football as a proud sponsor of FIFA since 1999.  Hyundai’s endless efforts to elevate its brand are to be smart and more innovative in the future. For the 2018 FIFA World Cup Russia ™ Maroon 5’s modern take on Three Little Birds tells people to forget their worries; reflecting Hyundai’s new ‘Hyundai exists to enhance everyday lives with quality time’ campaign, which informs customers about using our smart technology to keep safe and worry free while on the roads.”

This year, as well as working with Maroon 5 to release Three Little Birds, Hyundai has also created the ‘FIFA World Football Museum’ exploring the history of football and fan culture for fans. There are also a number of exciting competitions throughout the tournament that fans can enter to win amazing prizes, including: ‘Hyundai Cheering Stadium’, ‘Be There With Hyundai’, ‘Hyundai Predictor’ and ‘Hyundai Goal of the Tournament’. For more information on each competition and how to enter, visit worldcup.hyundai.com.

Joseph Kahn: GRAMMY Award winning music video director who worked with some of the biggest artists in the words and won several music video awards.
Maroon 5: GRAMMY Award winning US pop rock band.
Bob Marley: Jamaican singer-songwriter who became an international musical and cultural icon
Three Little Birds: One of Bob Marley's most popular songs, it was the fourth track on side two of their 1977 album.

Established in 1967, Hyundai Motor Company is committed to becoming a lifetime partner in automobiles and beyond with its range of world-class vehicles and mobility services offered available in more than 200 countries. Employing more than 110,000 employees worldwide, Hyundai sold more than 4.5 million vehicles globally. Hyundai Motor Company continues to enhance its product line-up with vehicles that are helping to build solutions for a more sustainable future, such as NEXO – the world’s first dedicated fuel cell-powered SUV. In 2018 the company revealed its new design philosophy ‘Sensuous Sportiness’, which will be embodied by all upcoming Hyundai vehicles.