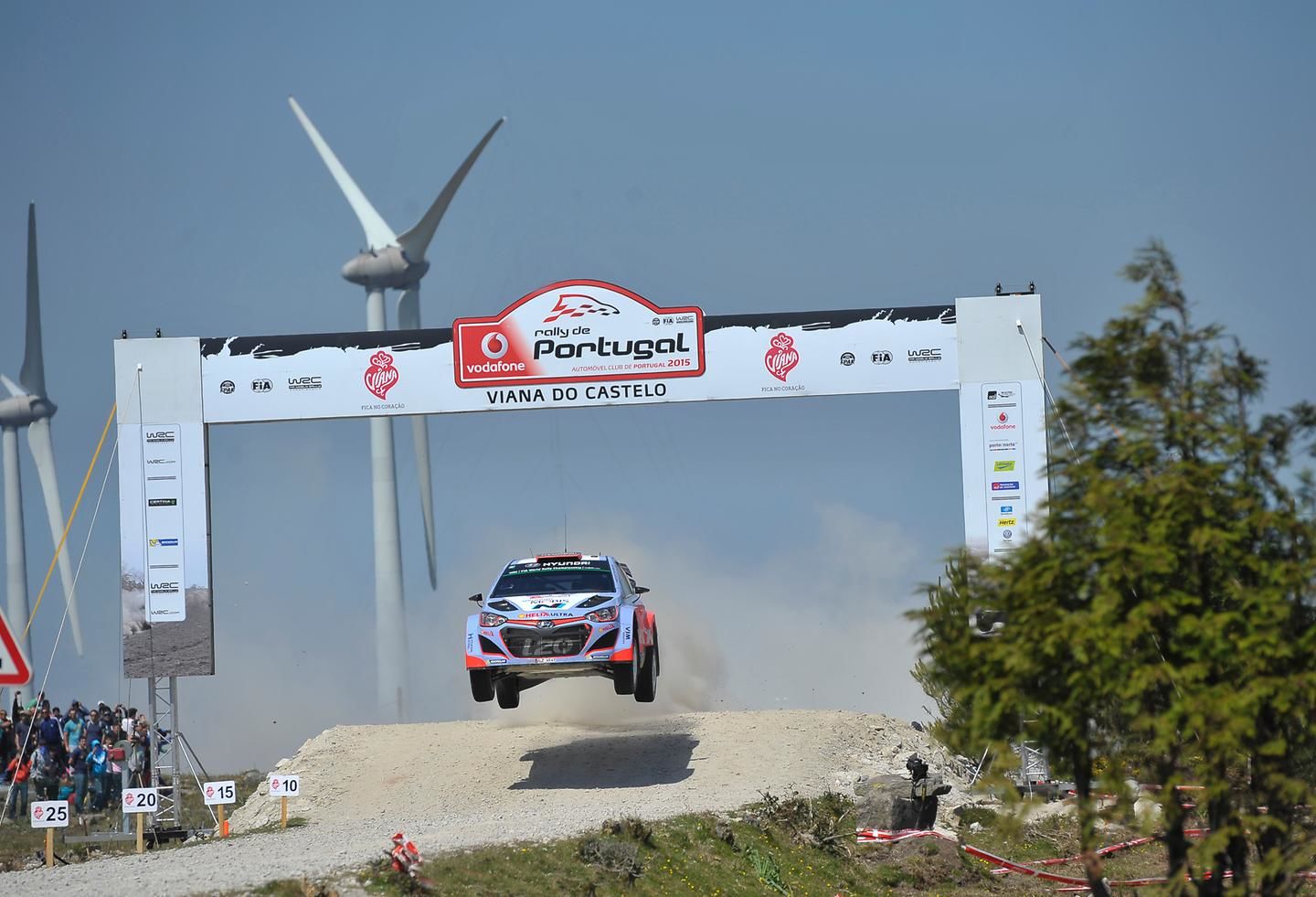 May 25, 2015 – Hyundai Motorsport has brought the fifth round of the 2015 FIA World Rally Championship (WRC) to a positive conclusion with two cars finishing in the top eight overall and the highest placed Hyundai i20 WRC in sixth position.

In a rally where tyre management has been key to unlocking performance on new-look, often slippery stages, it has been a valuable weekend of learning for the young Hyundai Motorsport team. The final day of three stages - the famous Fafe and the longer 32.35km Vieira do Minho stage - afforded the drivers a final push for position with some closely fought battles throughout the classification.

Hyundai Shell World Rally Team driver Dani Sordo (#8 Hyundai i20 WRC) was involved in a fierce fight for sixth place with Mads Østberg, but it was the Spaniard who came out on top after a clean run. The Spaniard, who has enjoyed huge support from the local crowds this weekend, extended his grasp on sixth place after the first Fafe run. His advantage was cut to just five seconds after the long SS15 but a solid performance in the Power Stage ensured his secured the top-six finish.

Sordo said: “I’ve been happier with the handling of the car on Sunday compared to Saturday. We had just one spare tyre like we did on Friday and I felt more confident. The longer stage was still slippery and it was a difficult run but we managed to keep our sixth position. Overall, I am happy with what we have achieved on this new-look rally. It has not been easy to manage the tyres and we struggled a bit on Saturday, but there have also been signs of encouragement. We picked up a stage win and have had good reliability from the car, so this is good for us to build on for Sardinia.”

Hayden Paddon (#20 Hyundai i20 WRC) has another top-eight result to his name after a strong weekend for the Kiwi, driving for the Hyundai Mobis World Rally Team. He was involved in the close fight for sixth place but struggled to find pace on worn tyres in the long SS15 stage, and was forced to settle for eighth overall.

Paddon said: “Firstly, I would like to say thanks to the team for fixing the car after our issues at the end of Saturday, which allowed us to get back out this morning. Our objective was to push through until the end, which we did with no real dramas. From the start, we found it difficult with different wear rates on the tyres, which felt like the car was continually trying to turn ends on us. The two Fafe stages were amazing with a great atmosphere from the crowds. I have never done this stage before, unlike some of the other drivers, and it was certainly a special feeling from inside the car. I’m quite happy with how the weekend has gone; we’ve been more competitive which gives us a lot of confidence for the next rally.”

Thierry Neuville (#7 Hyundai i20 WRC) re-joined the rally on the last day of the rally under Rally 2 after he rolled in the opening stage on Saturday morning. It has been a challenging weekend for the Belgian but he went on Sunday’s three stages to find a rhythm in his Hyundai i20 WRC and to prepare for the next round of the championship.

Neuville said: “It’s been something of a weekend to forget for us. We struggled on Friday with our tyre strategy, which lost us a lot more time than we expected, and we then had our issue on Saturday morning. Thanks to the hard work and determination of the team, we were able to re-join the rally on Sunday. I was important for us to complete today’s stages and to get the confidence back. We have to put this rally behind us quickly and I am sure we will come back stronger in Sardinia.”

Rally de Portugal has given the Hyundai Motorsport team valuable experience on new stages that have placed emphasis on effective tyre management. Strong performances on Friday, including a stage win and a second place, underline the potential of the Hyundai i20 WRC against tough competition.

Team Principal Michel Nandan commented: “On reflection, I think we can be reasonably satisfied to have two cars in the top eight and Dani finishing in sixth. It’s not where we want to be finishing rallies but the tyre tactics that we’ve had to manage have been quite a challenge for our young team. We were able to field all three cars on Sunday, thanks to the work of the team to get Thierry’s car ready after his roll on Saturday, and to fix Hayden’s car after he hit a rock at the beginning of SS13. All three drivers drove sensibly and within the limits to get all cars to the end. We’ve learned a lot and will use this to prepare for the next event, where I hope we can compete closer to the front runners.”