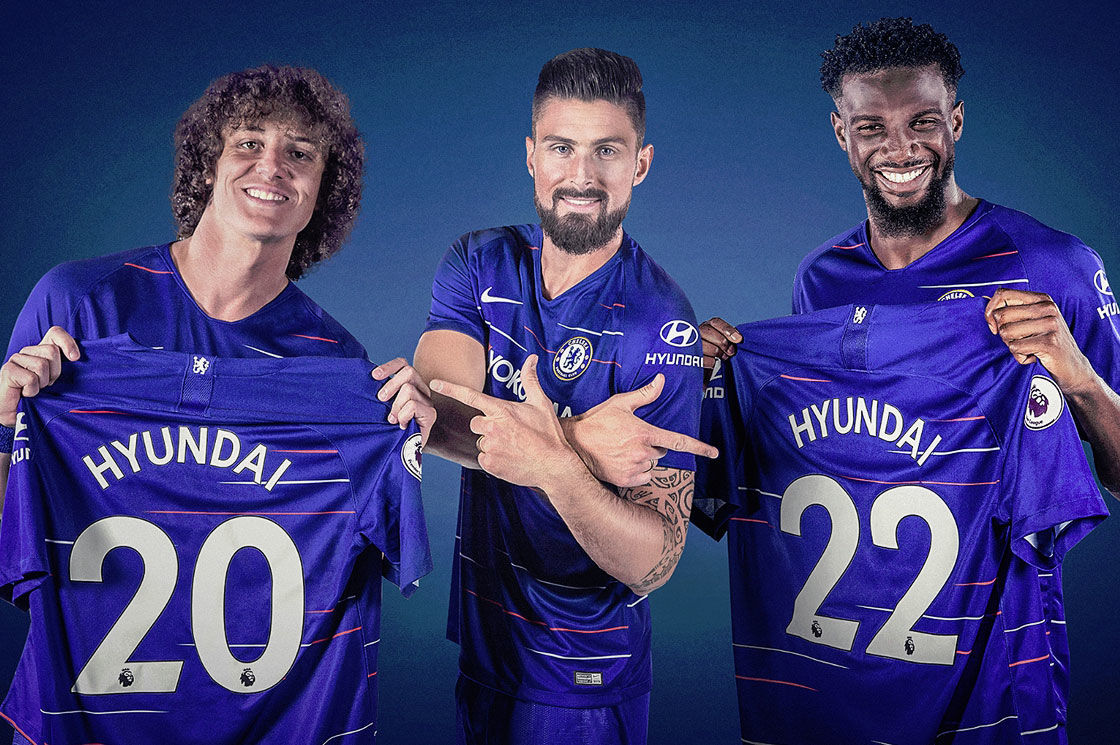 • Hyundai Motor to become Global Automotive Partner of the five-time Premier League champions
• Hyundai logo to feature on sleeve of all Chelsea shirts in domestic competitions from next season
• Feature video with Bakayoko, Giroud and Luiz shows partnership places fans at its heart

SEOUL, June 11, 2018 – Hyundai Motor today announced a multi-year partnership with Chelsea Football Club, which will see the Hyundai brand logo presented on the sleeve of the new Blues jersey in all domestic competitions from next season until 2022, as the Global Automotive Partner.

The deal with Chelsea is the first time that Hyundai has ventured into the UK football market. The new partnership extends Hyundai’s long-standing presence in football at the highest level, having been continuously engaged in national and international competitions for the last 20 years.

With this partnership, Hyundai will not only be visible on the jersey but also through car displays at the club, home matchday presence including LED perimeter branding, and various media and digital content rights.

The announcement comes as Hyundai launches a new video featuring Chelsea stars Olivier Giroud, David Luiz and Tiémoué Bakayoko. The entertaining short film sees the Blues players attend a photoshoot unlike any they have experienced before, as a group of dedicated Chelsea fans take center stage and assume the roles more commonly associated with their club heroes.

Over the course of the partnership, Hyundai will work closely with Chelsea to develop a range of initiatives and benefits for the club’s supporters, as part of its ambition to bring ease to mobility and make football more accessible to fans.

“For 20 years, Hyundai has been bringing the dynamism, passion and excitement of football to fans around the world. We are thrilled to begin a new partnership with Chelsea – a successful and ambitious club that matches the global scale and challenging spirit of Hyundai,” said Andreas-Christoph Hofmann, Vice President Marketing & Product at Hyundai Motor. He added, “Just as we always place the customer first, so we have always positioned fans at the heart of our activities throughout our long-running engagement in football. We will be taking the same approach with Chelsea fans as we kick off this new partnership. Along with our existing partnership with Olympique Lyonnais, this marks the start of a new pan-European sponsorship approach that will include other top clubs in Europe.”

Chelsea Commercial Director Chris Townsend OBE said, “We are delighted to be announcing our new partnership with Hyundai that will see this iconic brand appear on the sleeve of our match shirts from next season. At Chelsea we pride ourselves on partnering with some of the world's leading companies and we look forward to working closely with Hyundai as they seek to reward, engage and entertain our global fanbase.”

The logo on the new jersey will be seen in action for the first time on July 23rd, as Chelsea head to Australia to play a friendly fixture against Perth Glory, ahead of the 18/19 season.

Hyundai has been a FIFA Top Partner since 1999, was engaged with UEFA for 18 years to 2017, and remains heavily involved with national teams as well as individual clubs, including Olympique Lyonnais in France among others.

The Videos are available under the following links:

About Hyundai Motor Company
Established in 1967, Hyundai Motor Company is committed to becoming a lifetime partner in automobiles and beyond with its range of world-class vehicles and mobility services offered available in more than 200 countries. Employing more than 110,000 employees worldwide, Hyundai sold more than 4.5 million vehicles globally. Hyundai Motor Company continues to enhance its product line-up with vehicles that are helping to build solutions for a more sustainable future, such as NEXO – the world’s first dedicated fuel cell-powered SUV. In 2018 the company revealed its new design philosophy ‘Sensuous Sportiness’, which will be embodied by all upcoming Hyundai vehicles.