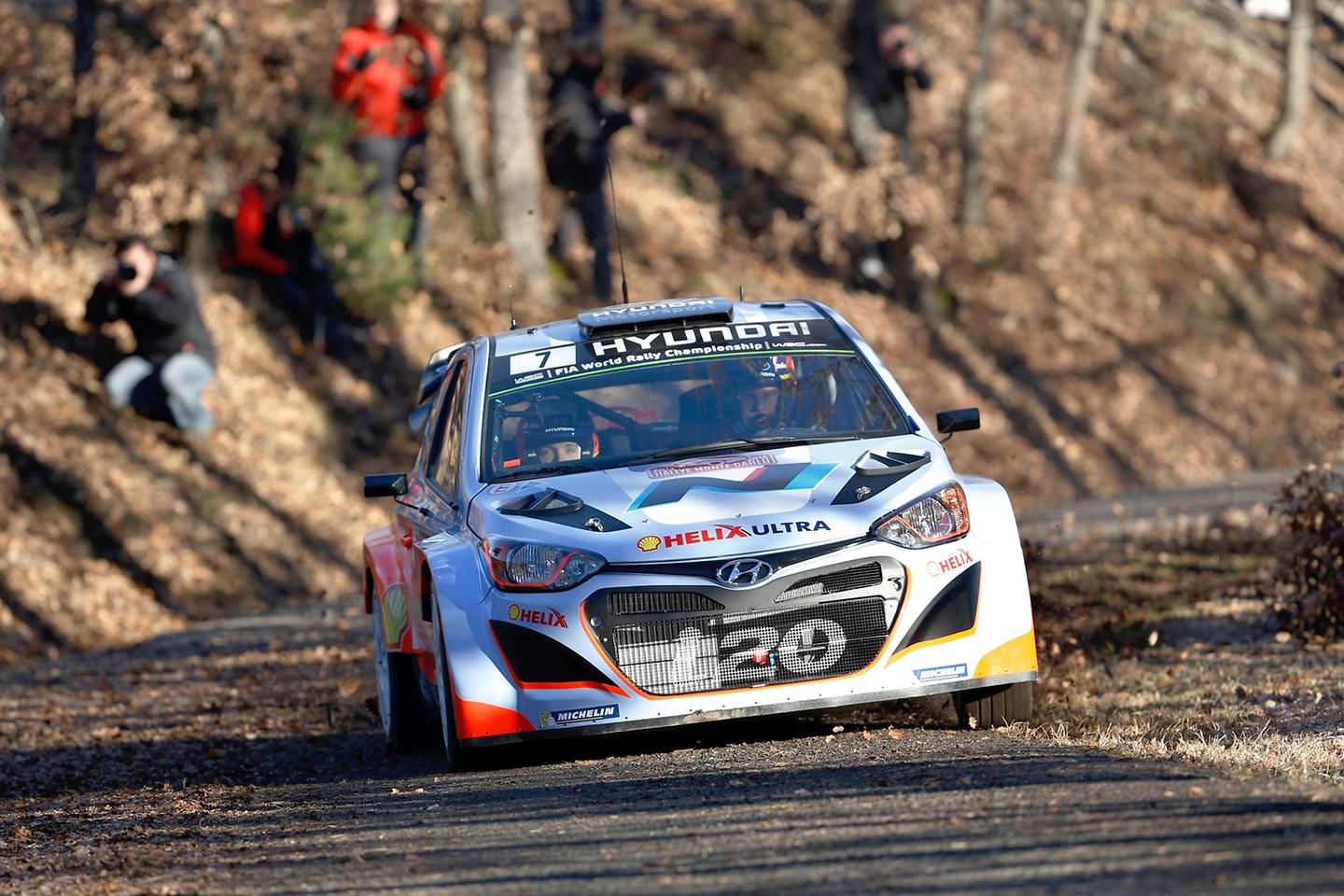 • Thierry Neuville/Nicolas Gilsoul and Dani Sordo/Marc Martí will take charge of the two Hyundai i20 WRCs entered into this event, driving the #7 and #8 cars respectively

• A preparatory test was carried out with both crews in mid-December in the Ardèche region of France which was followed by an extra pre-event test earlier this week.

January 16, 2015 – Hyundai Motorsport is ready to get its second year in the competitive FIA World Rally Championship (WRC) underway in style at the traditional season-opener, Rallye Monte-Carlo, next week. 12 months on from the team’s historic debut in the WRC, Hyundai Motorsport returns to the Principality with a clear intent to raise its game and continue to get closer to the leading competitors.

The team has entered two Hyundai i20 WRC cars into Rallye Monte-Carlo under the Hyundai Shell World Rally Team with Belgians Thierry Neuville/Nicolas Gilsoul (Hyundai i20 WRC #7) and Spaniards Dani Sordo/Marc Martí (Hyundai i20 WRC #8) on driving duties, as they will be at all 13 events this season.

Complex logistics, unpredictable weather and constant changes in grip are the main features of Rallye Monte-Carlo and will be the primary challenges faced by the teams in next week’s event. Tyre choice will also be critical; Monte-Carlo is the only event on the calendar where competitors – equipped on Michelin - will have five different tyre compounds to choose from – hard, soft, super soft, snow and studded. Mastering the correct configuration will be the key to the teams’ success.

Hyundai Motorsport’s preparations for Rallye Monte-Carlo started as early as mid-December last year, when Neuville and Sordo tested the Hyundai i20 WRC over four days in the Ardèche region – encountering a variety of climatic conditions that allowed the team to fine-tune the cars for next week’s rally. A final two-day pre-event test has been carried out early this week to allow the drivers to get more mileage on the car and make some final adjustments ahead of the rally.

In addition, the team will use all its acquired experience, data and learning from 2014 to tackle Rallye Monte-Carlo with the aim of getting closer to its main rivals. With this event being so unpredictable, anything is possible but with a good driver line-up and lessons learned from its maiden outing in WRC last season, Hyundai Motorsport will be looking for a good result in its first competitive event of the New Year.

Team Principal Michel Nandan said: “Rallye Monte-Carlo is well-known for quickly changing conditions and for always having many surprises in store. Even if you have experience from previous events, there are a lot of parameters influencing the result that you cannot control. Although our Rallye Monte-Carlo debut last year didn’t last very long, we were happy with the tyre choices we made and we are confident we will work in the right way again this time with our partners Michelin. We experienced a lot of bad luck in this event in 2014 but we’re aiming for a different result this time around. Our drivers know the event well, we know their level on asphalt is high and we know if the conditions are icy, wet or mixed then they can adapt and perform well in these circumstances. We’re still at an early stage in our development but we believe we can challenge strongly during a rally where car performance is not as much of a factor as it is on other rallies.”

For Neuville, Rallye Monte-Carlo has proven to be a tough event in the past but the Belgian is eager to prove a point in his fourth appearance at the event.

Neuville commented: “It’s true that we haven’t been very successful at Rallye Monte-Carlo in the past but it’s always a pleasure to drive on these roads and this year we really want to do well. We had a very short winter break as we started testing for ‘Monte’ in mid-December last year but we had some good preparation for the rally and we’re ready for it. Monte is always special, it’s the first rally of the season and the conditions can be very changeable so that it makes it difficult to predict what can happen. For sure I want to do more kilometres with the Hyundai i20 WRC than last year for myself and for the team. We will use all the experience we have of the event to aim for the best result possible.”

Spaniard Sordo returns to Rallye Monte-Carlo for the seventh time in his career determined to have a trouble-free event after last year’s promising performance was curtailed by an electrical problem on his Hyundai i20 WRC, forcing him to retire on the opening day.

Sordo said: “I really like Rallye Monte-Carlo, it’s completely different to every other event because of the weather conditions and the stages are beautiful, really twisty through the mountains. It’s also very famous and a big challenge for both the drivers and the cars. Our aim, of course, is to go as fast as possible and score as many points as we can. A podium is possible on this event because on Monte everything can be achieved due to the unpredictable weather. It’s important to remember we were third last year when we had a small, but unfortunately terminal, technical problem. Even though it’s a very difficult rally you have to push but you also have to remain calm when the conditions are tricky.”

Celebrating its 83rd edition this year, Rallye Monte-Carlo will introduce some new features which will freshen up the event and make it even more interesting for both competitors and spectators. Two night stages on Thursday 22 January, new stages further North and the introduction of the Rally 2 regulations are the main changes for this year’s event which kicks off with the traditional Ceremonial Start in the Casino Square in Monaco. Once again the main Service Park will be based in Gap, in France, until Saturday morning when the circus moves to the Principality for the last section of the event.