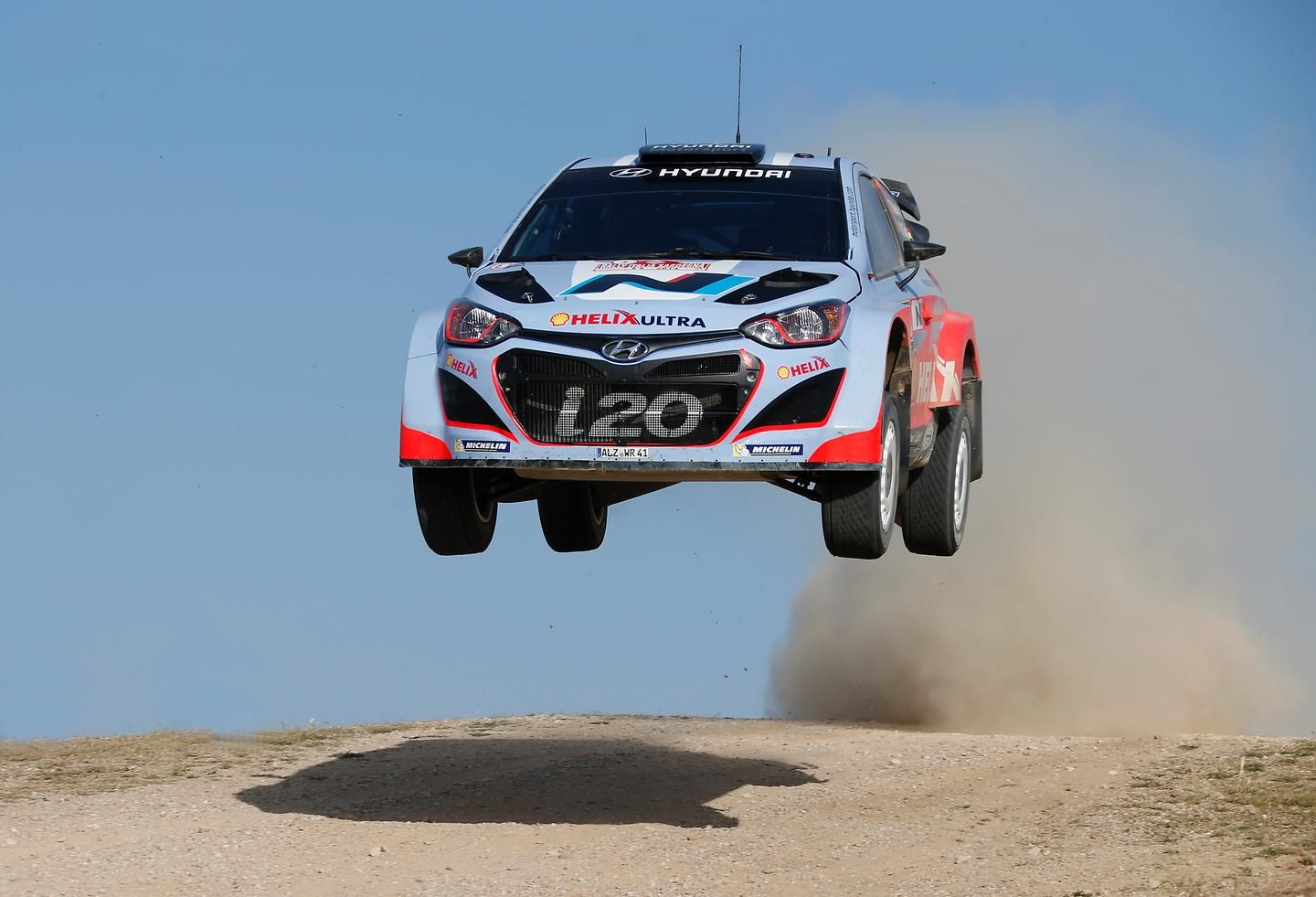 - Hyundai Shell World Rally Team has concluded Rally Italia Sardegna, round six of the 2014 World Rally Championship, with two Hyundai i20 WRCs reaching the finish of a tough rally
- The event has been another source of precious information gathering for the young team as it continues use the very public platform of the World Rally stage to do its learning
- Thierry Neuville and Hayden Paddon were able to help the team further develop the Hyundai i20 WRC to meet the demands of Sardinia’s gravel terrain in today’s final stages.

June 9, 2014 – The Hyundai Shell World Rally Team has achieved a number of important objectives in this week’s Rally Italia Sardegna as it continues to evolve the Hyundai i20 WRC rally car for the tough challenges faced in the FIA World Rally Championship.

Neuville continued from where he left off on Friday, again with the disadvantage of being one of the first on the road, to identify areas of improvement on the Hyundai i20 WRC in tough, slippery terrain. The experience of this rally has been helpful for the team to assess different suspension settings, which will be beneficial for the next rally in Poland.

Neuville said: “We have really made good use of our time here in Sardinia to work hard on developing our Hyundai i20 WRC for these challenging conditions. Going out on the road so early means that we have been cleaning the route in most stages but I think Nicolas and I did a good job in the circumstances. We have also been able to understand the strengths and weaknesses of the car in these conditions. Obviously, we are all disappointed with what happened on Friday, which prevented us from fighting further up the classification. The team has done a good job and we can look forward to Poland where we will continue to make improvements.”

New Zealander Hayden Paddon has successfully completed his debut rally as a Hyundai Shell WRT driver, learning more and more with each stage. The 27-year-old has adopted a mature approach to his first attempt at Rally Italia Sardegna and has settled into the team with ease. He encountered an engine misfire during yesterday’s final stage after going through the water splash but the team worked hard during the night, using Rally 2 regulations and refreshing the car for the final day. Paddon has not wasted the opportunity, picking up confidence and pace in the final four stages to bring his and team’s first rally together to an encouraging conclusion.

Paddon said: “The guys did a great job last night to repair the car and to get me back out into the rally today. Like yesterday, we were early out on the road so we had to contend with slippery conditions and loose gravel. In this morning’s stages, we had to look after the tyres and that affected the times but I felt more confident in the car today. I knew it was going to be a tough first rally with the team because I have never driven here before, but we have had good progression. We’ve not been pushing and have concentrated on getting to the end of each stage, learning as much as possible both for myself and for the team. Overall, there are definitely things we could have done better but this is not a one off event so we can use this to build for the next event.”

Hyundai Shell World Rally Team now has six WRC events under its belt in its debut season in the championship. It is important to remember that the team’s objectives for the entire 2014 season are to build up experience in a competitive rally environment and adapting the Hyundai i20 WRC car performance to the particularities of each stage and each rally. Next week will mark the one year anniversary of the official inauguration of Hyundai Motorsport’s facility in Alzenau, Germany, but for the team the progress made over the past twelve months has been staggering.

Team Principal Michel Nandan: “We have had a busy, tough but ultimately very productive rally here in Sardinia. We are not competing this year for stage times but to develop our Hyundai i20 WRC for each rally. Of course, it is nice when we show competitiveness, as indeed we have done in several stages this weekend. This Rally Italia Sardegna has been particularly tough and in some extremely hot temperatures. The team has done a fantastic job, working really hard and we leave here with lots of motivation for the next round in Poland. Thierry and Hayden have done a professional job today and we have used the final stages of the rally to learn more about the car. It is obviously a shame we couldn’t finish with all three cars but we still leave here with lots to discuss back at the factory to prepare for Poland.”

About Hyundai Motor Company
Established in 1967, Hyundai Motor Company is committed to becoming a lifetime partner in automobiles and beyond. The company, which leads the Hyundai Motor Group, an innovative business structure capable of circulating resources from molten iron to finished cars, offers top-quality best-sellers such as Elantra, Sonata and Genesis. Hyundai Motor has seven manufacturing bases and seven design & technical centers outside of South Korea and in 2013, sold 4.73 million vehicles globally. With almost 100,000 employees worldwide, Hyundai Motor continues to enhance its product line-up with localized models and strives to strengthen its leadership in clean technology, starting with the world’s first mass-produced hydrogen-powered vehicle, ix35 Fuel Cell.
More information about Hyundai Motor and its products can be found at: http://worldwide.hyundai.comor http://www.hyundaiglobalnews.com

About Hyundai Motorsport GmbH
Established on 19 December 2012, Hyundai Motorsport GmbH is responsible for Hyundai’s global motorsport activities and primarily for its World Rally Championship programme.  Based in Alzenau on the outskirts of Frankfurt in Germany,the company has embarkedon its debut season in the FIA World Rally Championship in 2014 with a bespoke team of skilled staff and a brand new car, the Hyundai i20 WRC.
Further information about HyundaiMotorsport is available at: http://motorsport.hyundai.com
To download high resolution photos for editorial use, fulldriver’s profiles, audio podcastsas well as other usefulpressinformation about the team please refer to:
www.hyundai-ms.com