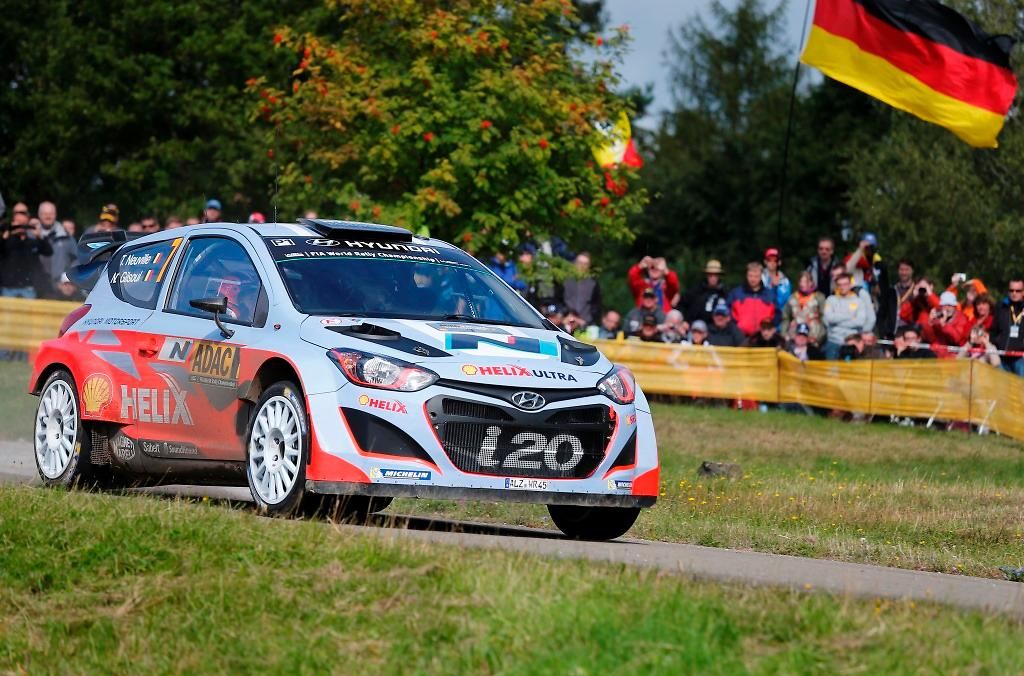 Shortly after travelling more than 16,000km to Rally Australia – the furthest distance to a WRC event in 2014 - the team will now cover one of the shortest distances to reach a rally – as only 250km separate Rallye de France’s base in Strasbourg from the team’s factory in Alzenau, Germany.

Three Hyundai i20 WRC cars will take part in the French event with the same driver line-up that helped the team to attain its historic 1-2 at Rallye Deutschland in August. Thierry Neuville and Nicolas Gilsoul, Dani Sordo and Marc Martí, as well as Bryan Bouffier and Xavier Panseri will be behind the wheel of the #7, #8 and #20 cars respectively.

Once again based in Strasbourg, the 18 stages that make up Rallye de France will take competitors to the French regions of Bas-Rhin, Haut-Rhin and Vosges with narrow, twisty mountain sections alternated with rapid, winding forest and country roads which will test the drivers’ skills to the maximum.

Tyre choice will play a key role on this event with the weather being unpredictable and rain a distinct possibility. The team’s meteorological service, the weather crews located out in the surrounding area and its route note cars – who drive through the stages ahead of the competitors – will have vital importance during the rally to determine the correct tyre selection.

The Hyundai Shell World Rally Team tested ahead of Rallye de France with Neuville, Sordo and Bouffier in the Vosges region of France where the team encountered a mix of dry and wet conditions which allowed the drivers to work on a good base set-up for the event. The main target for the team this weekend remains as always to learn and acquire information in the competitive rally environment but the team also has a top-five finish in its sights, particularly given its strong line-up of tarmac-experienced drivers.

Team Principal Michel Nandan commented: “Rallye de France will be another important event for us to continue learning in our debut WRC season.  We feel a bit more prepared on tarmac now, but France is another opportunity to gather valuable information for the future with our Hyundai i20 WRC car. We know it will not be easy, particularly with the unpredictable weather, so choosing the most appropriate compound of Michelin tyre will be essential. On top of that, there will be remote service on Saturday which will make things even more interesting. We welcome Dani and Bryan back to the team for France. As with Thierry, they are fast tarmac drivers and that can only help us. They know well the car and we know their feedback will be good. We still have work to catch up on our main competitors but we can wait a little bit longer for that because we are just at the start of a long-term programme.”

Neuville and Gilsoul come to Rallye France with some extra preparation as they participated in the East Belgian Rally last weekend. For the Belgian duo Rallye de France is an event which brings positive memories from their previous outings and they will be looking to put in another strong performance with the Hyundai i20 WRC.

Neuville said: “We had some good preparation for Rallye de France with the test in Vosges and taking part in the East Belgian Rally back home in Belgium last weekend. We had some rain during our test, which is obviously important if we encounter wet conditions over the weekend. In fact, I will be hoping for it because the driver can really make a difference in difficult conditions. I have good experience in the rain and have always shown a competitive level – not just in the World Championship but also in my early career in Belgium. Like all rallies, France is a sprint event and we have to drive on the limit all the time but I’m sure we’re up to the challenge!”

Runner up to Neuville at Rallye Deutschland, Sordo is looking forward to sitting once again in the Hyundai i20 WRC. Rallye de France will mark a double celebration for his compatriot co-driver Martí as he commemorates his birthday on Wednesday 1 October and his 150th WRC start in the rally.


Sordo said: “I really like Rallye de France. It is an extremely fast event and the surface changes frequently which makes it technically demanding. The weather plays an important role but I like both dry and wet weather conditions, which require drivers to be focused and have very accurate pace notes. For this reason, recce will be very important in France. I have shown some good speed here in the past and with some very good results. We tested the Hyundai i20 WRC on tarmac before the rally and I feel we’re well prepared so we will be doing all we can to score a strong result this weekend.”

French pairing Bouffier and Panseri will return for their second rally with the team after Germany behind the wheel of the Hyundai i20 WRC #20, representing the Hyundai Motorsport N team.

Bouffier commented: “Rallye Deutschland was quite difficult for us so we’re for sure hoping for a strong comeback at Rallye de France this weekend. It’s our home rally so it will be especially important to do well there as our friends and supporters will be spectating out in the stages. It’s also an event that I know and I have contested before as part of the French Rally Championship – the last time in 2010 - and from those experiences I remember the stages are really nice and I really liked them. Our target is to finish the rally unperturbed and we will do our best to help the team in the development of the Hyundai i20 WRC by providing as much feedback and information as we can.”

With an itinerary of just over 300km, Rallye de France will kick off on Thursday 2 October with a Ceremonial Start held in Strasbourg’s city centre with the real action starting the following day with seven stages run along the Bas-Rhin and the Vosges roads. The second day run in the Haut Rhin region will be the longest of the event with over 125km of competition and it will include a Remote Service in Colmar. This means the crews will only head to the main service park at the end of the day after a long day of rallying. The final day of the rally on Sunday 5 October features four stages, including the Forêt de Saverne Power Stage, where extra points are up for grabs.