Mission accomplished for Hyundai Motorsport with top-four finish in Finland 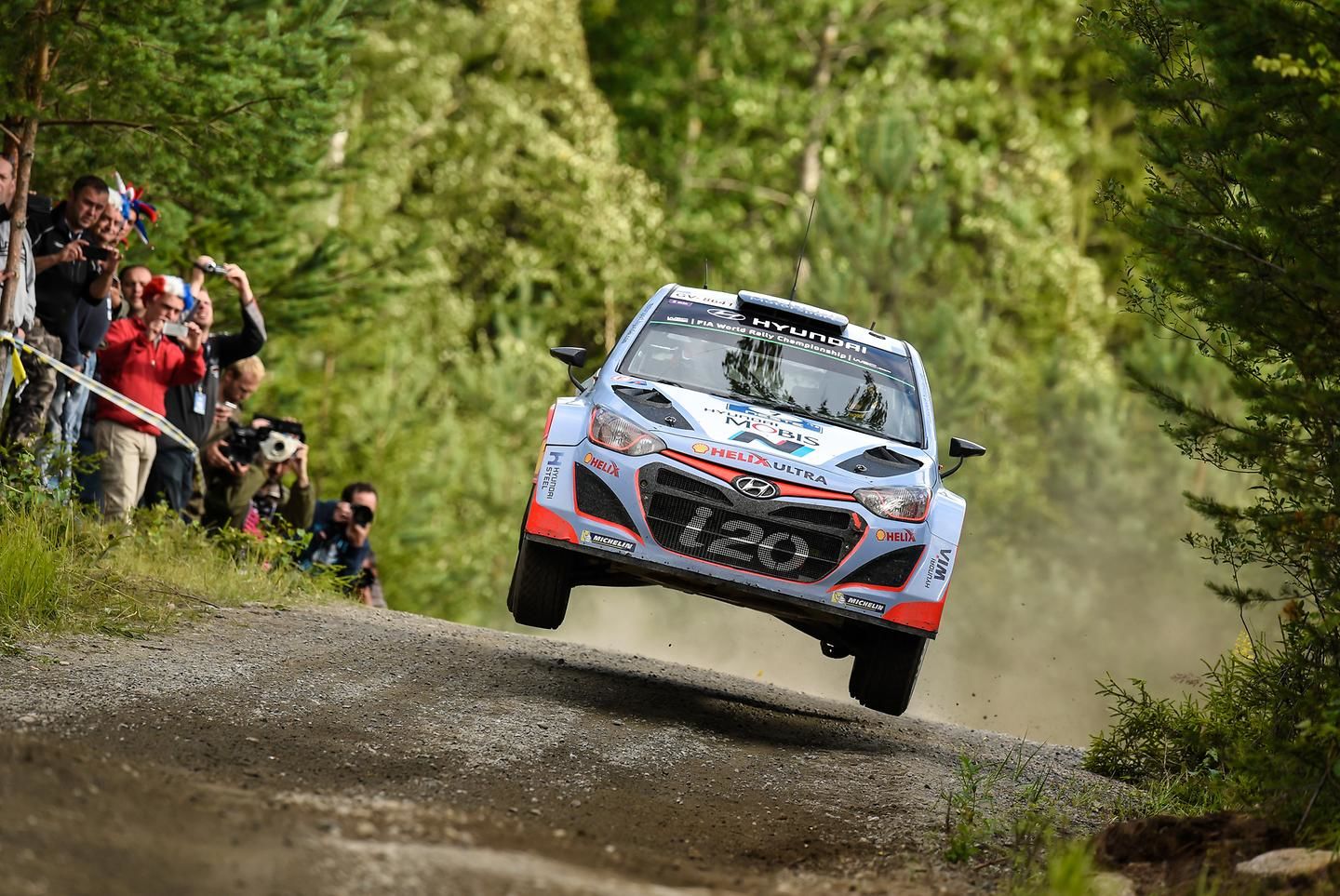 Mission accomplished for Hyundai Motorsport with
top-four finish in Finland

• Hyundai Motorsport has finished Rally Finland, round 8 of the 2015 FIA
World Rally Championship (WRC) in fourth place after a trouble-free final day

• After some great work from the mechanics on the last Saturday, Thierry
Neuville was able to complete the rally to take the team’s third top-four result
in a row

After a difficult rally, the two remaining Hyundai i20 WRC cars completed final stages, two runs of the 14.40km Myhinpää stage, with a deliberately cautious approach from the drivers, as the team added valuable points to its Manufacturers’ total.

Dani Sordo (#8 Hyundai i20 WRC) completed the rally in 11th place after his off on the last Saturday afternoon dropped him out of contention for the top-five. A two-car finish was the team’s revised target following the unfortunate retirement of Hayden Paddon on Friday, and although the outright pace was not enough to challenge for the podium, the team has still made improvements throughout the last weekend.

For Neuville, the result helps to cement his fifth place in the drivers’ standings and comes after a steady run for the Belgian this weekend. A crash in Thursday morning’s shakedown dented his confidence but he has picked up the pace over the weekend, culminating in a solid finish.

Neuville said: “To finish in fourth place is not a bad result considering the start we had to this rally! The team did an incredible job to fix our Hyundai i20 WRC after our crash in shakedown and we have since worked hard to regain the feeling with the car on these fantastic stages. We couldn’t really have expected anything better than fourth place this weekend. We can’t be completely happy but it’s a decent finish and, most importantly, we’ve picked up some good manufacturer points. Thanks to the team for their support this weekend, we must now look towards Germany and hope to challenge closer to the podium.”

Sordo was on course for a top-five result this weekend but an incident at the start of the last Saturday afternoon’s loop ended the Spaniard’s charge. He lost five minutes of time rescuing his car which dropped him down the classification but his resilience and determination allowed him to salvage a finish just outside of the top ten.

Sordo said: “It’s been a disappointing end to the rally for me. I was improving my confidence levels stage by stage and was enjoying the contention for fifth place with Thierry. Unfortunately, we lost five or six minutes recovering the car from the ditch which put an end to our ambitions for a good result. We had nothing to really push for today so we took it easy and brought the car home safely. We can now prepare for Rallye Deutschland with optimism and we have some happy memories from last year - I’m looking forward to it.”

Rally Finland is always a test of the drivers and the last weekend’s event has proved once again that a driver’s confidence level can make all the difference. The Hyundai Motorsport team has worked hard to improve the performance of the Hyundai i20 WRC throughout the event’s 20 special stages and fourth place marks an improvement over the team’s sixth place twelve months ago.

Team Principal Michel Nandan said: “We can be reasonably satisfied with fourth place in Finland after a tricky rally which has required all drivers to really dig deep to build their confidence. Following the disappointment on Friday when Hayden was forced to retire, we focused on getting two cars to the end of the rally and we have managed that - although with a few incidents along the way. Thierry has worked calmly and steadily this weekend after his shakedown crash on Thursday and his fourth place is a reward for that approach. Dani lost contact with the top-five yesterday afternoon and could not regain positions today. We must look at this rally closely to understand where we can improve as a team because our overall pace was not enough to fight for the podium, which is where we want to be. We will all look forward to Germany - a special event for our team!”