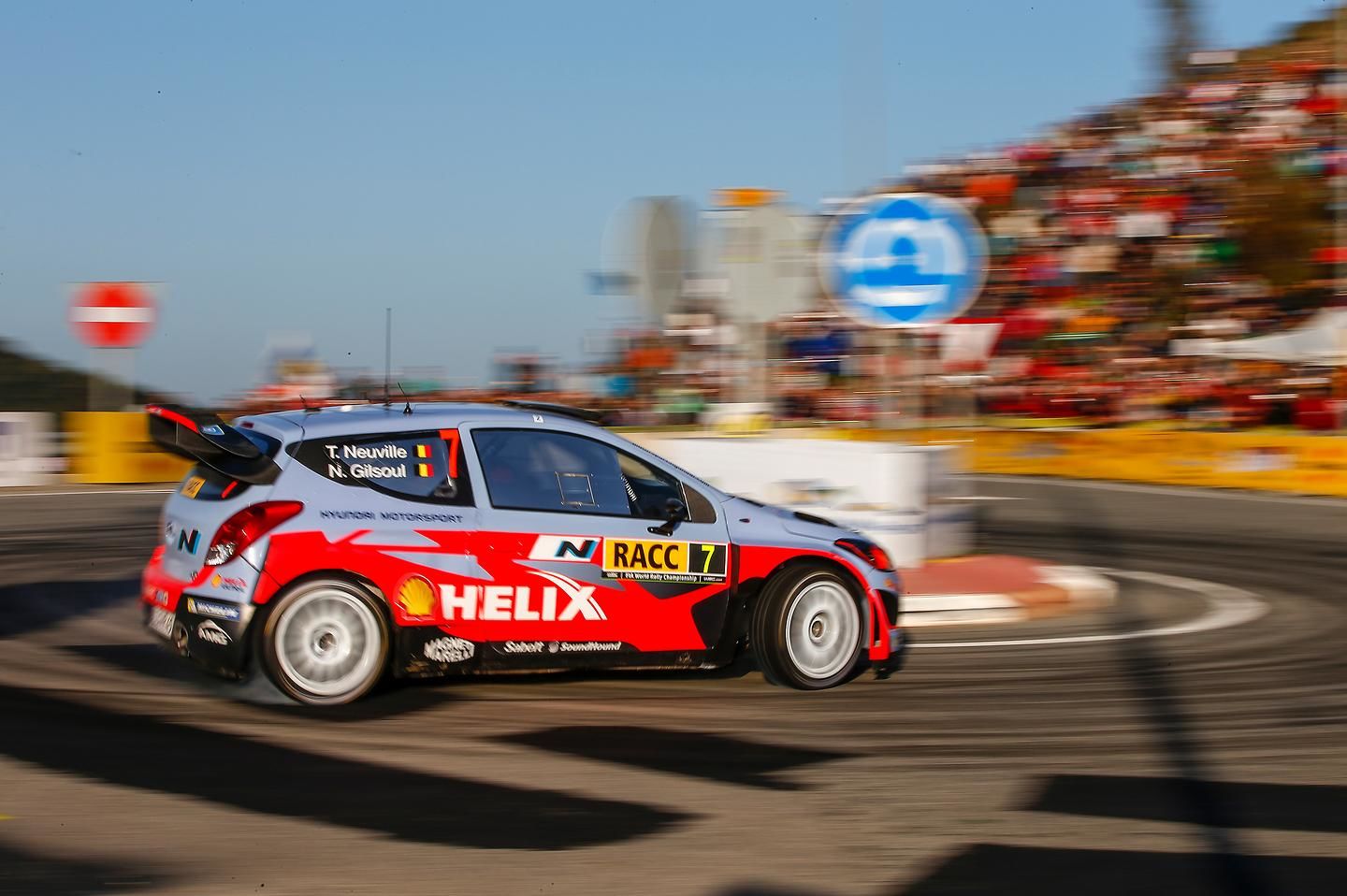 October 27, 2014 – The Hyundai Shell World Rally Team achieved its primary objective as all three cars finished in the top ten of the RallyRACC – Rally de España, gaining valuable experience throughout the event. The drivers set some impressive stage times on the mixed surfaces on the opening day and consolidated the positions over the weekend as the team refined the set-up of the Hyundai i20 WRC on twisty and challenging tarmac roads of the Costa Daurada.

As first time visitors to the only event in the WRC formally classified as mixed surface, the rally provided a unique challenge for the Hyundai Shell World Rally Team.  With two stage wins on Friday, first from Hayden Paddon on SS3 and then on SS6 from Thierry Neuville who also briefly led the event overall, the team established the pace of the car. Over the tarmac stages of Saturday and Sunday the drivers have focused on improving the balance of the car on the twisty and abrasive tarmac roads.

The final day of the event concluded with 72.06 km of asphalt special stages. Two runs through both the La Mussara stage at 20.48 km and the Ruidecanyes at 15.55km, the second of which (SS17) served as the live Power Stage.

Dani Sordo (#8 Hyundai i20 WRC, co-driver Marc Martí) pushed hard throughout the final day chasing Mads Østberg for fourth place. Finishing as the leading Hyundai Shell World Rally Team driver, he eventually had to settle for fifth place by 8.9 seconds, his third consecutive top five finish. Driving in front of their passionate home fans, the pairing who were more comfortable on the tarmac roads of the weekend, delivered a measured and consistent performance with a largely trouble-free run reflecting their experience of the event.

Sordo said: “We have pushed hard all weekend and although we couldn’t quite secure fourth place we are pleased with this solid performance. We have learned a lot about the balance of the car throughout the weekend and gathered a lot of useful information to help to improve our performance on tarmac. We have been careful to avoid issues all weekend and another top five place is a good result for our young team. Thanks also to the home fans – it’s good to see so many of them here supporting us on the stages.”

Thierry Neuville (#7 Hyundai i20 WRC, co-driver Nicolas Gilsoul) eventually finished one place behind in sixth after being locked in a tight battle throughout Sunday with Andreas Mikkelsen. Neuville led the rally on day one at the end of SS3, but after a puncture dropped him down the leader board he has spent the weekend improving the balance of the car on the twisty but smooth asphalt stages.

Neuville said: “We pushed hard on day one to establish our performance level and showed that we have very good potential in the car. Once we got onto the tarmac we struggled a little with understeer on the narrow twisty sections typical of these stages although the car was very good on the faster roads. We are still in our first season and are still refining our asphalt set-up on our first visit to Spain so overall we are making good progress. I’m looking forward to continuing our day one pace as we head to Wales Rally GB.”

Hayden Paddon (#20 Hyundai i20 WRC, co-driver John Kennard) finished in ninth place after his only WRC event on tarmac since Spain last year. The rally started in memorable style for the 27 year old Kiwi as he set his maiden fastest stage on the gravel of SS3. While he lacked confidence in the turn-in of the car on the tighter tarmac sections over the weekend, he worked with the team to gather information to improve the car and increased his relative pace with his team mates.

Paddon said: “It has been a positive rally for us overall. I secured my maiden stage win and we have gained a lot on information and experience. We have struggled with set-up on the tighter sections but we have all learned a lot to help improve our tarmac performance moving forward. It is good to finish in the top ten with no major issues on our only sealed surface event of the year and I’m looking forward to getting back on the gravel at Wales Rally GB.”

The 50th running of Rally de España has provided the Hyundai Shell World Rally Team with a lot of useful information on the teams’ first visit to the event. The abrasive tarmac surface and high afternoon temperatures over the weekend provided a challenge for the young team, particularly on the slower narrow and twisty sections, but the drivers largely avoided issues in bringing all three cars to the finish and gaining valuable experience.

Team Principal Michel Nandan said: “We have learned a lot this weekend about our performance potential in these conditions. The drivers were pushing today but were suffering from understeer on all three cars. We know we have some work to do to improve the balance in the twisty sections but we have gathered a lot of data to help us. The team started the rally well with some strong performances and we made good progress on set-up with the new tyres as we moved from gravel to the tarmac sections over the weekend. We should also congratulate Hayden on his maiden stage win. We now need to focus on the next and last round of the season back on gravel.”