Less than 100 days before June 11 kickoff

The Perfect Marketing Platform for an Up and Coming Young Brand

Hyundai sees football sponsorship as a core element of its marketing strategy and as a key way of communicating and connecting emotionally with football fans.  Through its football sponsorship, Hyundai aims to position itself as a dynamic automotive brand by delivering the excitement of the planet's most popular game to football fans worldwide.  Hyundai remains deeply committed to supporting and furthering the development of the beautiful game. 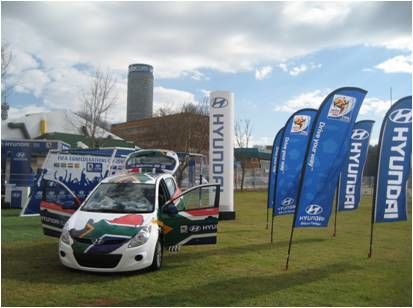 For this year’s tournament, 609 Hyundai passenger cars/vans and 2,800  bus use days will be put at the disposal of FIFA officials, national teams, members of the organizing committee, referees and media representatives.  And for the first time in Hyundai FIFA World Cup™ sponsorship history, Hyundai will be providing its own Universe luxury coaches for the upcoming FIFA tournament in right hand drive editions that were specially manufactured for the occasion.  The Universe buses will be used for the official transport of the 32 national teams and will be decorated with the national team colors, flags and the winning slogan of the ‘Be There with Hyundai’ competition, Hyundai’s sole and exclusive program. 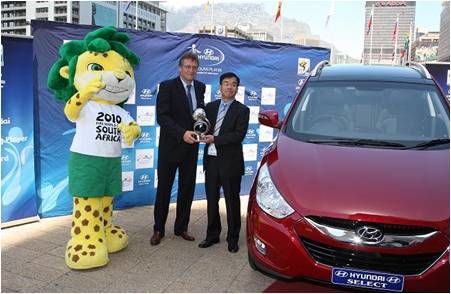 The company has a variety of promotional events planned for this year’s tournament, all designed to raise awareness of the brand. These include:

Inspired by previous Fan Fests staged during the 2002 and 2006 FIFA World Cups, Hyundai is expanding Fan Fest beyond the host country shores to major football capitals around the world thus further elevating the fun and yundai’s visibility.  To be staged in the major cities of the qualifying countries, Hyundai Fan Fest will convey all the thrills and excitement of the tournament to millions of fans. 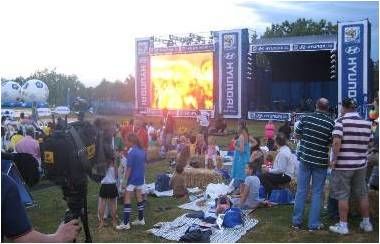 Be there with Hyundai 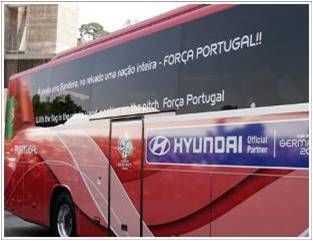 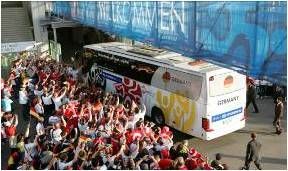 e in the lead-up to the EURO 2004 tournament, Be There with Hyundai (BTWH) has retained its reputation as one of the most successful marketing programs sparking huge media interest. In collaboration with FIFA, the BTWH program will once again be executed for the 2010 FIFA World Cup™.  The participants compete in the creation of slogans for their national team and the winning slogan is then used to decorate their national team buses.  The program harnesses the powerful emotions of football fans to generate high levels of media exposure.  Local distributors and dealers who have participated in the planning and execution were impressed and, in some cases, even overwhelmed by the results.  With the high level of distributors’ support and active marketing activity 2010 FIFA World Cup “Be there with Hyundai” will carry on the legacy.  Slogans can be submitted online by visiting the Hyundai FWC microsite and offline at dealerships.

The Hyundai Best Young Player Award (Hyundai BYPA) recognizes the most outstanding performances by young footballers at the FIFA World Cup™.  This coveted honour for players aged 21 and under is a FIFA award, details of which are available at www.FIFA.com.

From the opening game in Johannesburg, football fans from all over the world will be able to visit FIFA.com to predict the youngster who makes the biggest impression on them and lights up the 2010 FIFA World Cup South AfricaTM.  The winner will then be chosen by the FIFA Technical Study Group TSG, a FIFA-appointed technical group of top football coaches and analysts who will evaluate the young players’ overall performance.

The FIFA World Cup™ has a tradition of being a launchpad for many great careers and the tournament is constantly illuminated by youngsters who enter as unknowns before the opening ceremony but leave as superstars after the world’s biggest single sporting event.  Pelé’s impressive burst onto the scene in 1958 remains the milestone, as the Brazilian football legend made history at the age of 17 years and “249” when he became the youngest player to win the FIFA World Cup™, scoring twice in the final on 29 June 1958 for good measure.

FIFA.com will have a special section on rising superstars, both past and present.  Over the coming months, additional information and features on great young players from previous FIFA World Cup™ tournaments will be added, with a glance also cast towards potential award winners in 2010.  Until the event gets underway, fans will be able to watch great youngsters from the past such as Franz Beckenbauer, Antonio Cabrini, Teofilo Cubillas, Michael Owen and Pelé to name but a few in full flow by accessing video clips from the FIFA Film and TV archives exclusively on FIFA.com, the most popular sports event website ever.

Senior Vice President of Hyundai Motor Company HQ, Sean Kim said, “Through this exciting award, Hyundai is determined to strengthen its brand image not only as a strong supporter of international football, but a nurturer of young players who will be the future stars of football.”

Visitors to the site are able to participate in contests and learn more about 2010 FIFA World Cup South Africa.  Hyundai has created a variety of online and offline promotional events, providing the opportunity to win tickets, vote for the Best Young Player of the tournament, play online games and more.

Hyundai already has a link in the official website of the 2010 FIFA World Cup South Africa (www.FIFA.com) that leads to its slogan contest site 「Be There with Hyundai」.  This is the first of its kind for a sponsor, facilitating one-click access to www.fifaworldcup.hyundai.com, Hyundai’s newly opened micro-site for its World Cup marketing activities.

In addition to the online marketing activities, Hyundai will display some of its top vehicles at the respective stadiums during the games, including the all-new Sonata and Tucson ix (badged as the `ix35’ in some regions).  To bring soccer fans closer to the World Cup, various promotional events are in store such as the Fan of the Match, which gives one lucky winner the chance to be named best fan at the match.

Hyundai is confident its World Cup marketing activities will create a synergy effect that will help the company enhance its brand image, adding to the momentum of the successful sponsorship of 2006 FIFA World Cup Germany which is calculated to have generated an advertising equivalent value of 3 trillion won.

Hyundai is one of the strongest corporate supporters of football in the world having served as the official sponsor of the 2002 FIFA World Cup Korea / Japan™ and the 2006 FIFA World Cup Germany™ as well as many other FIFA tournaments.  The company has extended its strategic sponsorship agreement with FIFA to cover the 2010 and 2014 World Cups.  Under the agreement, Hyundai Motor will enjoy main sponsorship rights for all FIFA events, including the rights to use logos, emblems as well as signage display in the stadiums.

The site, http://fifaworldcup.hyundai.com, will be open throughout the 2010 FIFA Word Cup games.

Fan of the Match 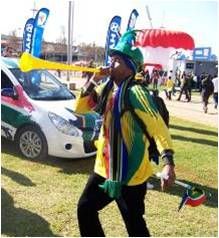 ‘Fan of the Match’ is a FIFA World Cup program exclusive to Hyundai.  This signature event aims to stir up fun and excitement at the match venues by rewarding the most outstanding fans.  The fan with the most colorful, zaniest costume will be presented to the crowd on the giant screen on half-time at all Hyundai 38 matches.  All 38 ‘Fan of the Match’ winners will automatically be entered into the ‘Fan of the Tournament’ contest at FIFA.com. The winner of the ‘Fan of the Tournament’ will be awarded a valuable prize. 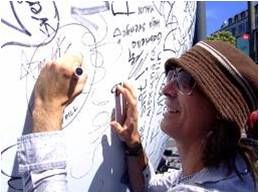 The Hyundai Goodwill Ball has been Hyundai’s flagship promotional event for football since its first introduction at UEFA EURO 2000™.  For the sixth consecutive time, Hyundai is again sparking the passion and goodwill of football fans worldwide.  The huge balls embark on national road shows visiting main cities where fans congregate to meet football stars, sign the balls and send their wishes of good luck their respective national teams.  After traversing the country, the giant balls will travel to South Africa where they will be displayed outside the stadia.

History of Hyundai’s Involvement with FIFA

Hyundai To Transport All National Teams At 2010 Fifa World Cup™