2012.11.06 14:00:00 No. 1432
Hyundai Centennial Named 2012 Car of the Year
The Centennial, Hyundai’s flagship car, has been named 2012 Car of the Year (COTY) by leading Middle East car magazine Sport Auto. The award was presented to Tom Lee, head of Hyundai’s Middle East regional headquarters, by Gerard Saunal of Sport Auto at the prestigious Specialized Systems for Exhibitions and Conference (EXCS) International Motor Show in Jeddah, Saudi Arabia.

Gerard Saunal, editor-in-chief of Sport Auto, commented on the Centennial’s victory: "The Sport Auto team has had the opportunity to test drive the Hyundai luxury car model the Centennial several times in Saudi Arabia and abroad. We were amazed with its stunning development over other models in its segment. Thus, we were sure, independently, of the superiority of this car and that it deserves the ‘2012 Car of the Year Award.’”

Across the world, the Centennial is now recognized as a serious contender in the premium car sector, traditionally dominated by German and Japanese cars. The same is true in the Middle East, where the Centennial has seen sales surge by 298 percent from January to September this year compared to last year, illustrating growing consumer confidence in Hyundai’s flagship model across the Middle East.

Tom Lee, head of Hyundai’s Middle East regional headquarters, commented on the award: “It is a great honor to receive this award, the first time anywhere in the world that the Centennial has been named Car of the Year. It is not only a testament to how far we have come as an automotive company, but also recognition that we now have established models in the luxury car segment.”

The Centennial’s interior is cloaked in luxurious leather upholstery and features a natural wood trim and a leather-wrapped instrument panel, all showcasing the richness of this luxury sedan.

Centennial is a true testament to luxury, with the highest standards of user experience. Passengers enjoy a wealth of luxury from air cell massage seats, power adjustable leg supports for extra comfort and the center console that houses a cool box big enough to fit any refreshments. Electric side curtains and luxury seat back tables add to the sense of prestige and refinement.

With all the features expected in a luxury car, the Centennial comes with all the latest on-board technology, starting in the rear with an 8-inch LCD monitor entertainment screen and dedicated armrest controls that allow the passengers to manage the multimedia and comfort zone functions.

The exterior is no less impressive with its charismatic and sophisticated look that makes a statement wherever the Centennial goes. The 4.6-litre Tau DOHC V8 unit produces 373 hp at 6,500 rpm, while the model is also available with a 3.8-litre MPI engine that produces 290hp at 6200rpm, giving it a top speed of 240kph.

Testament to Hyundai’s commitment and confidence in its premium model is its Premium Assurance Program. Customers buying a Centennial can enjoy the Hyundai Premium Assurance Program: a five-year unlimited mileage warranty, free servicing for three years or 60,000 kms., buy-back value guarantee and roadside assistance. Also, the customers receive their very own service advisors under the terms of the program. 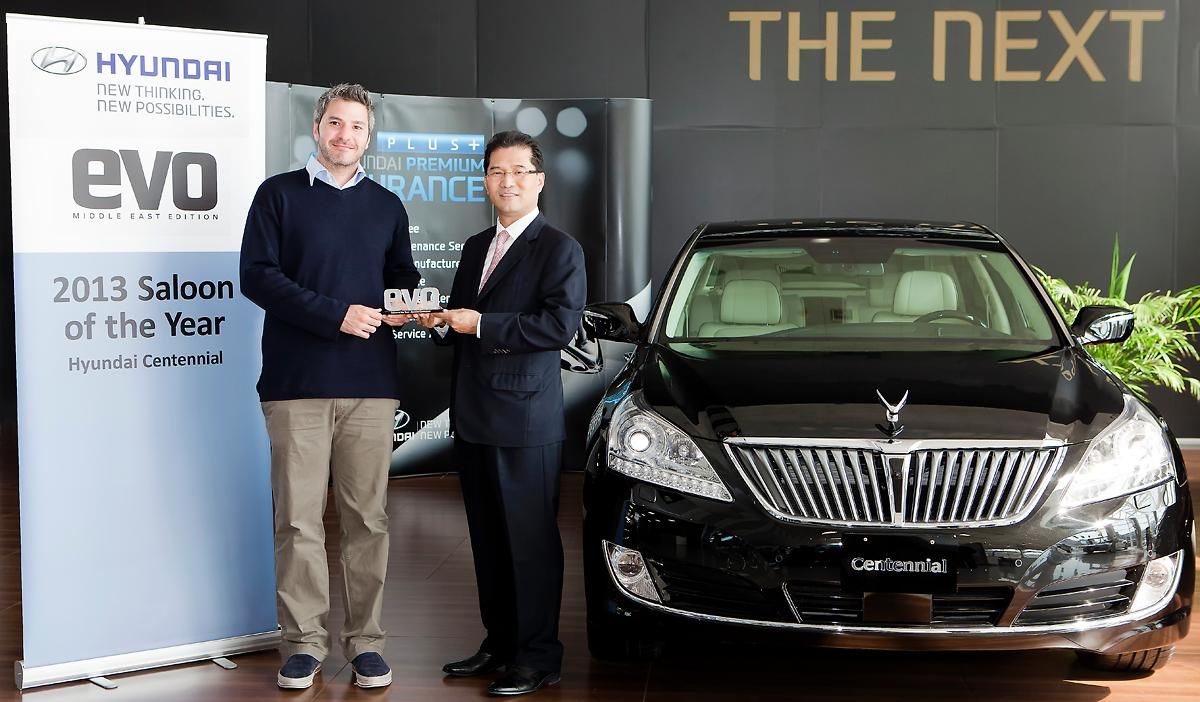