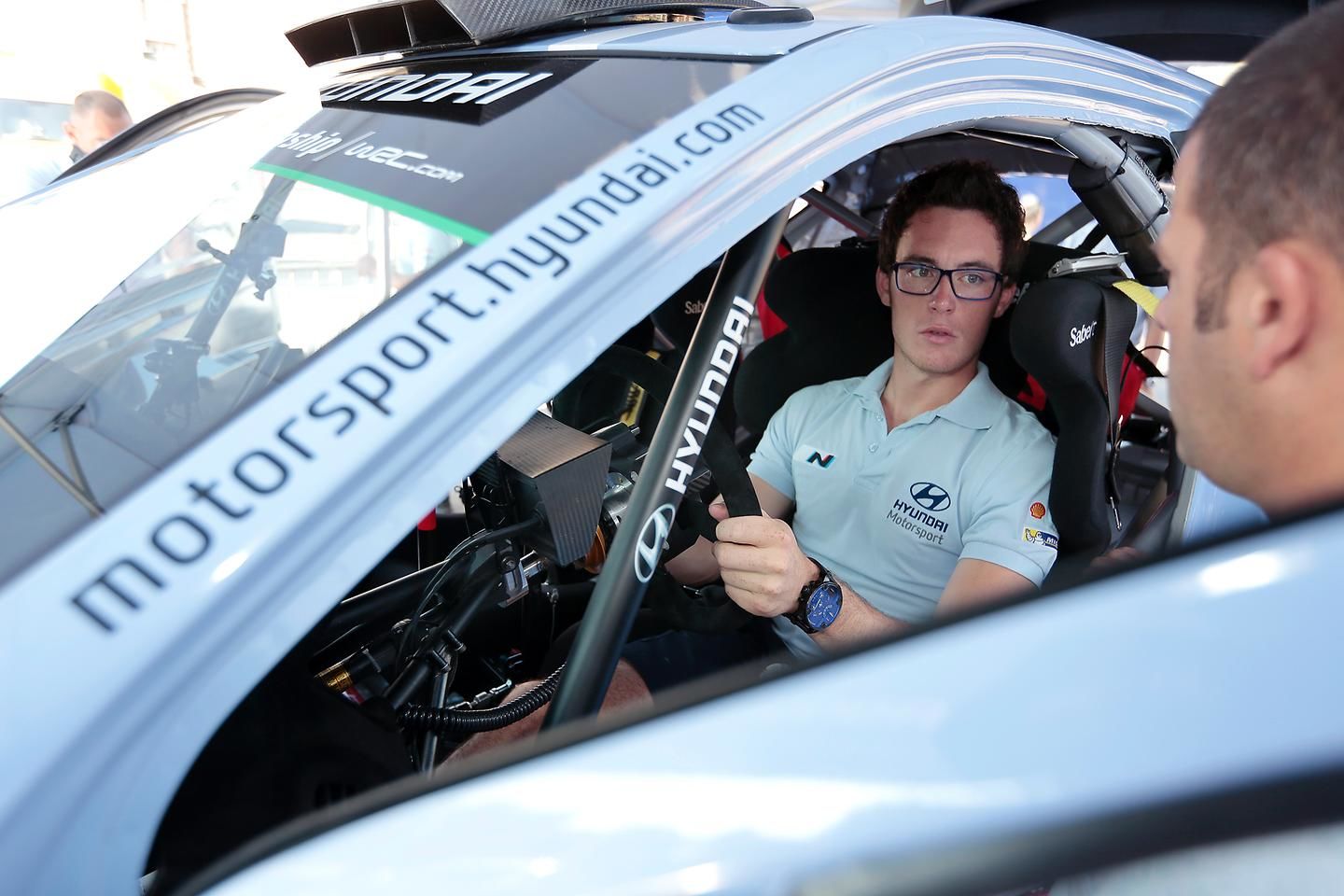 August 14, 2014 - After competing for most of the first half of the FIA World Rally Championship (WRC) season on gravel, the Hyundai Shell World Rally Team is ready to make its debut on the first proper tarmac event of the season at Rallye Deutschland next week. With Hyundai Motorsport’s headquarters in Alzenau only 225km away from the rally base in Trier, Rallye Deuschland can be considered as the team’s home rally.

Thierry Neuville and Nicolas Gilsoul (Hyundai i20 WRC #7) will lead the three-car squad entered by the team at Rallye Deutschland. The Belgian duo will be joined by Spaniards Dani Sordo and Marc Martí (Hyundai i20 WRC #8), who make their return to the Hyundai Shell WRT for their first rally since Argentina. The Hyundai Motorsport N entry will be allocated to Frenchman Bryan Bouffier and co-driver Xavier Panseri (Hyundai i20 WRC #20) on their first WRC rally with the team. The duo have played a testing role with Hyundai Motorsport since 2013, so are certainly no strangers to the team.

Three days of rallying await competitors next week, with stages having distinct characteristics and taking in some unique landscapes: twisty roads in the vineyards alongside the Mosel river; fast stages in the Northern Saarland region; technical tests in the Baumholder military area with its massive, car-destroying ‘hinkelstein’ rocks on the side of the road.

The team has put in many kilometres in readiness for tarmac, with all three drivers having completed several days of testing ahead of the event in both the vineyards and Baumholder military area.  The Hyundai Shell World Rally Team will also put into use its experience on tarmac from Rallye Antibes - which Bouffier won back in May - to prepare the Hyundai i20 WRC cars for Germany.

Having introduced an upgraded cylinder block and connecting rods at Rally Finland, the team will use some chassis ‘jokers’ from Rallye Deutschland, with a focus on durability, for example strengthening the radiator supports and the wheel arches.

The team’s objective for Rallye Deutschland remains to finish with all three Hyundai i20 WRC cars and to collect as much feedback as possible for the remaining tarmac rounds of the season.

Team Principal Michel Nandan said: “Rallye Deutschland represents another new challenge for the team as we will see the Hyundai i20 WRC in action for the first time on proper tarmac roads. I think we have a very strong line-up for this event with Thierry and Dani having solid records on this event and with Bryan having a lot of experience with our i20 WRC on compact surfaces. We will introduce some chassis ‘jokers’ in Germany related primarily to the radiator supports and wheel arches which have been strengthened in a bid for greater durability. We are always looking to bring all our cars to the finish of the rally and to continue the development of the car for the next rounds on asphalt but we will also be aiming to set some good stage times throughout the event.”

Rallye Deutschland can be considered almost a home event for lead driver Neuville with his birthplace St. Vith being only 85km away from Trier – the host city of the event.

Neuville commented: “Rallye Deutschland is like my home rally; there will be a lot of Belgian fans – including my family and friends - spectating out in the stages and I’m really looking forward to it as it will be the first time with the Hyundai i20 WRC on tarmac. I feel very comfortable on asphalt so I really want to do well in this event and help the team, as always, to make progress with the car. To succeed at Rallye Deutschland you need to be smooth and precise with your driving on the twisty roads. We have done some good testing ahead of the event where we worked hard on finding a good set-up for next week. “

Winner of Rallye Deutschland in 2013, Sordo returns to the #8 Hyundai i20 WRC for his fourth outing with the team, determined to show his pace on the German tarmac stages.

Sordo said: “I really like the stages of Rallye Deutschland and I’ve been looking forward to driving the Hyundai i20 WRC on proper tarmac since the beginning of the season. I won the rally last year and it’s an event at which I feel very confident to drive although it can be a difficult one. There are several kinds of roads surface and the weather can play an important role too as it can often be unpredictable. I was back behind the wheel of the Hyundai i20 WRC after a few months at our pre-event test and it was a nice feeling – I think we are well prepared for the rally and we have a good set-up to tackle these stages.”

Eager for his first outing with the team at a WRC event, Bouffier will aim to make the most of the chance given him by the team.

Bouffier commented: “It’s the first time I am competing in the WRC with an official team so it goes without saying that I’m really excited and very pleased to have this opportunity. I have never competed at Rallye Deutschland before but last year I was on gravel notes duty so I know what to expect from the stages. However, you can’t learn those stages by heart. Recce will be crucial and it will be very important to have good pace notes for this event. Since we won Rallye Antibes in May the Hyundai i20 WRC has improved a lot on tarmac - we could feel it at the pre-event test – and we will do our best to get a good result and help with the development of the car.”

Rallye Deutschland will get underway on Thursday 21 August with the traditional ceremonial start in Trier at the Porta Nigra, an UNESCO World Heritage Site. Although the real action will start on Friday 22 August with 18 stages split over three days and a total of 362km.