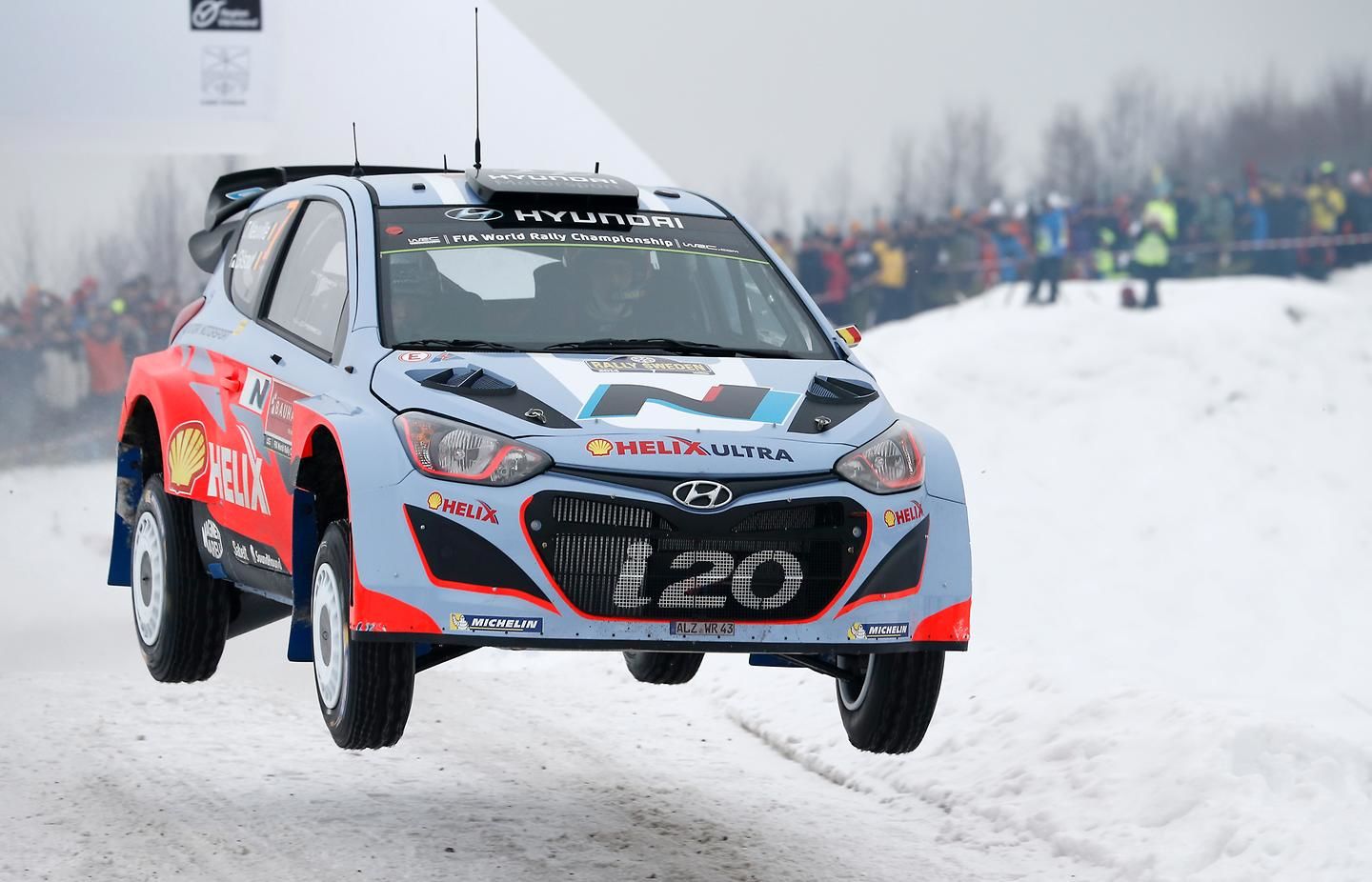 ●  Hyundai Motorsport has reconfirmed it will enter three Hyundai i20 WRC cars
into next month’s Rally Sweden, round two of the 2015 FIA World Rally
Championship (WRC)
●  Thierry Neuville and Dani Sordo will be behind-the-wheel of the #7 and #8
Hyundai i20 WRC cars respectively with Hayden Paddon competing with the #20 car
●  The trio will be Hyundai Motorsport’s primary driver line-up at WRC events in 2015.

January 9, 2015 – After entering two Hyundai i20 WRC cars for Rallye Monte-Carlo later this month, Hyundai Motorsport will switch to a three-car entry for Rally Sweden in February in order to raise its game in the competitive FIA World Rally Championship (WRC).

Belgian crew Thierry Neuville/Nicolas Gilsoul and Spaniards Dani Sordo/Marc Martí will continue behind the wheel of the #7 and #8 Hyundai Shell World Rally Team cars respectively. Hayden Paddon will take part in his first event of the year at Rally Sweden, driving the #20 Hyundai i20 WRC alongside compatriot co-driver John Kennard, as the Kiwi crew remain with the team this year in an expanded role.

Hyundai Motorsport carried out a preparatory test in Sweden in mid-December with Neuville and Sordo each driving two days in the Hyundai i20 WRC. Paddon will test the car for one day during the week prior to the rally, with the Belgian and the Spaniard also getting some extra time in the Hyundai i20 WRC with a half-day test each.

Neuville has started Rally Sweden three times in the past, with some encouraging results and performances – including a fifth place in 2013. Both Sordo and Paddon have competed in Rally Sweden in the past but this year’s event will give both drivers the opportunity to accumulate more experience in snow conditions.

With a strong trio of drivers, Hyundai Motorsport aims to use all the experience and information gathered from its debut season in 2014 to make improvements at each rally on comparative performance levels and to get closer to the leading WRC competitors.

Neuville, Sordo and Paddon will be Hyundai Motorsport’s main line-up for the coming season and they will take the start of all events unless announced otherwise.

Team Principal Michel Nandan commented: “As we saw last year, having three cars on WRC events is very positive and helps us to develop our Hyundai i20 WRC more rapidly. Overall, I think we have a good line-up for Sweden with Thierry, Dani and Hayden. Despite our drivers not being surface specialists, they have proven to be consistent in Sweden in the past and I’m sure we will see some interesting performances from them this year. Thierry and Dani had a pre-event test in December for Sweden which helped them to find a reliable set-up for the event; we know it’s a tough event and we want to be as prepared as possible.”