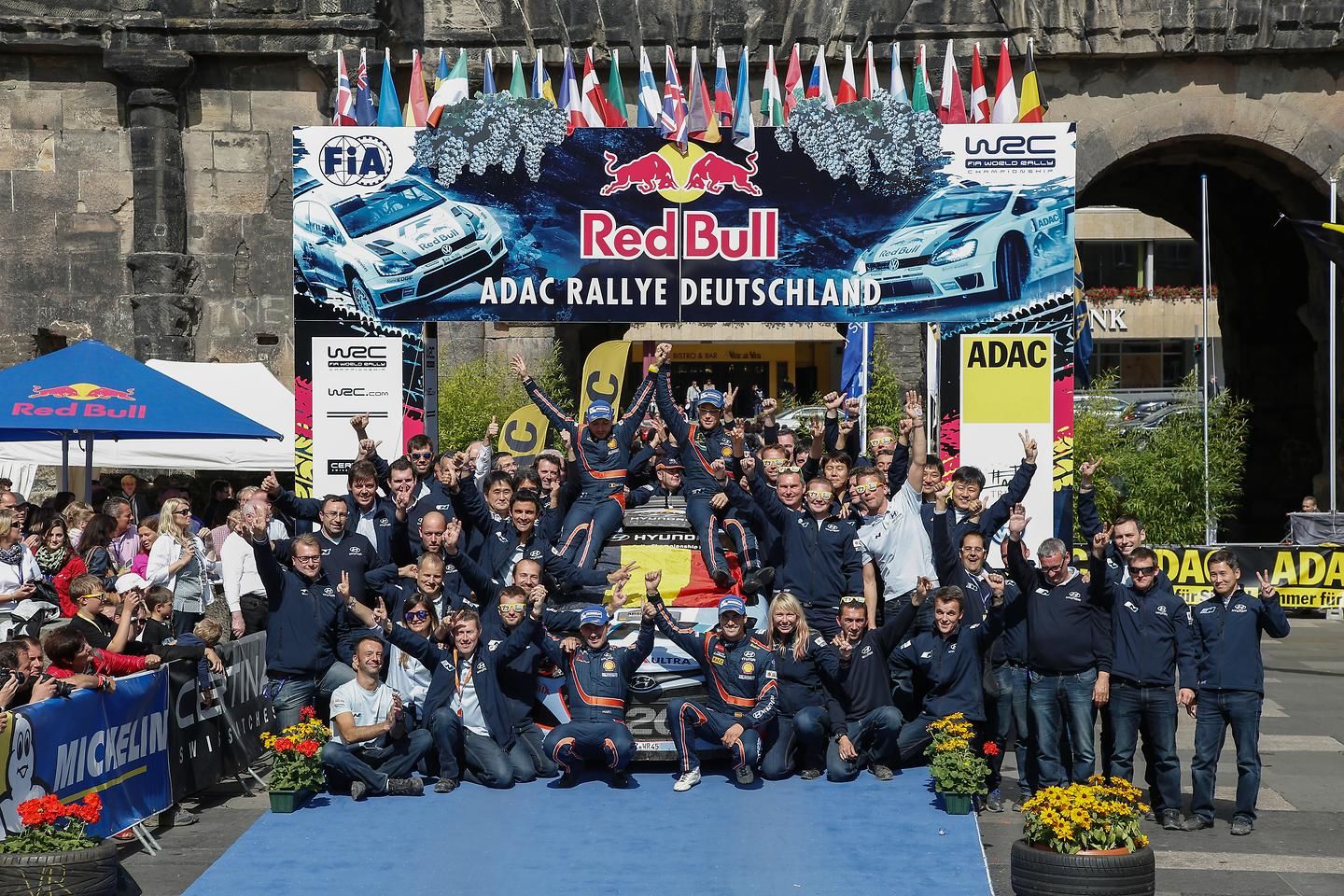 The team, run by Hyundai Motorsport from its factory in Alzenau, around 225km from Rallye Deutschland’s service park in Trier, has only been in existence for just over one year and a half so today’s result is even more poignant.

The script for this weekend’s rally was straight out of a fairy tale: from a major crash in shakedown on Thursday that threatened Neuville’s participation in the event, the mechanics working a remarkable 18 hour shift to fix the car in time for Friday morning’s start to winning the team’s debut WRC event on Sunday afternoon. It has been a dramatic rally but one from which the Hyundai Shell World Rally Team has emerged victorious.

Neuville (#7 Hyundai i20 WRC, co-driver Nicolas Gilsoul) put the drama of shakedown firmly behind him when the stages got underway on Friday morning. The Belgian has not put a foot wrong since and has determinedly made his way up through the classification since the opening day. He was fully in contention for a podium at the start of Sunday, embroiled in a close battle for second but the retirements of the two leading cars in consecutive stages elevated the Belgian to the rally lead. Neuville then kept his focus to bring the #7 Hyundai i20 WRC car home for the win – his first in WRC. The Belgian brings home also two extra points for being second fastest in the Power Stage – the last stage of the rally.

Neuville said: “I am really happy for the entire Hyundai Shell World Rally Team and everyone back at the factory in Alzenau. Everyone has worked so hard in the past year to get us to where we are this season so to celebrate my debut WRC win with them is very special. It is even better that we have a 1-2 in our home event. I am particularly thankful for the team’s hard work this weekend. They did a fantastic job after our roll on Thursday to get the car repaired which makes this result more incredible. We have had three competitive days and we have been able to put the pressure on. Of course, it was a shame to see Jari Matti (Latvala) and Kris (Meeke) retire this morning, but that reinforced the need for us to remain focussed and concentrated. The conditions were very difficult so we had to take it steady to the end. It’s a great result and one which we will certainly never forget.”

Sordo (#8 Hyundai i20 WRC, co-driver Marc Martí) also had a competitive rally in Germany, an event he won so memorably in 2013. The Spaniard, in his first WRC event since Argentina in May, got quickly reacquainted with the car and the team to post impressive stage times from the start of the rally. He was in the hunt for a podium at the end of Friday but he lost a lot of time on Saturday afternoon when he aquaplaned into a spin. Nonetheless, he kept going and benefitted from others’ misfortune in Sunday’s opening stages to take second place behind his team-mate. He then drove masterfully not only to keep the car on the road but also to defend his second place – his first podium of 2014 and contributing to the team’s incredible 1-2 result.

Sordo said: “This is a great result for the whole team and a testament to all the people who work so hard in the team and at the factory. To get our first 1-2 is fantastic. Normally, I would prefer to be the one scoring the win but I am happy with second and I am pleased for Thierry. It has been a tough rally so we were focussed on getting to the finish safely. I have to say the team has really developed a lot since I was last competing, both in terms of the operations and the car performance. We can really use this result to continue our momentum and our learning in our first year.

Bryan Bouffier (#20 Hyundai i20 WRC, co-driver Xavier Panseri) completed Rallye Deutschland under Rally 2 regulations following his coming together with a Hinkelstein on Saturday’s final stage. The mechanics worked their magic to allow the Frenchman to rejoin the rally this morning but unfortunately he went off at the start of the Power Stage and was unable to complete the event.

Bouffier said: “I am disappointed that I haven’t been able to complete this rally. The conditions have not been easy and I was just caught out in the final stage. The positive fact is that the team has been rewarded with a fantastic 1-2 result, so congratulations to Thierry for the win and Dani for second. This result will represent a huge motivational boost for the entire team, who have worked so hard in the past year and a half. Having been part of the journey since last year, I feel very close to this team and I share in the joy of this result with all of them.”

The Hyundai Shell World Rally Team is understandably overjoyed with the 1-2 result and becoming a winning WRC manufacturer so early in its young programme. The team has demonstrated its intent to the WRC and shown steady improvement throughout the season but winning was never on the agenda in this learning year.

Team Principal Michel Nandan said: “I feel a little bit like I am still dreaming. We could never imagine that coming here, in just our ninth WRC rally, that we would be celebrating a 1-2 result. It is quite remarkable and very special. It has been a busy weekend with some tough conditions and requiring everyone to be at the absolute top of their game. Our team has been absolutely first class and it is thanks to each of them – here and at Alzenau – that we have this result today. The drivers have been on competitive form since the first stage and they thoroughly deserve this. To see Thierry take his first win and Dani on the podium is wonderful. We wanted to use this year as a learning year and we won’t let this result carry us away. However, we have made continuous progress and our Hyundai i20 WRC is improving all the time. We benefitted from the unfortunate retirement of other drivers today but we were genuinely fighting for the podium and that reflects the progress we have made as a team. For now, we will enjoy the moment and thank everyone for their support of our young team.”