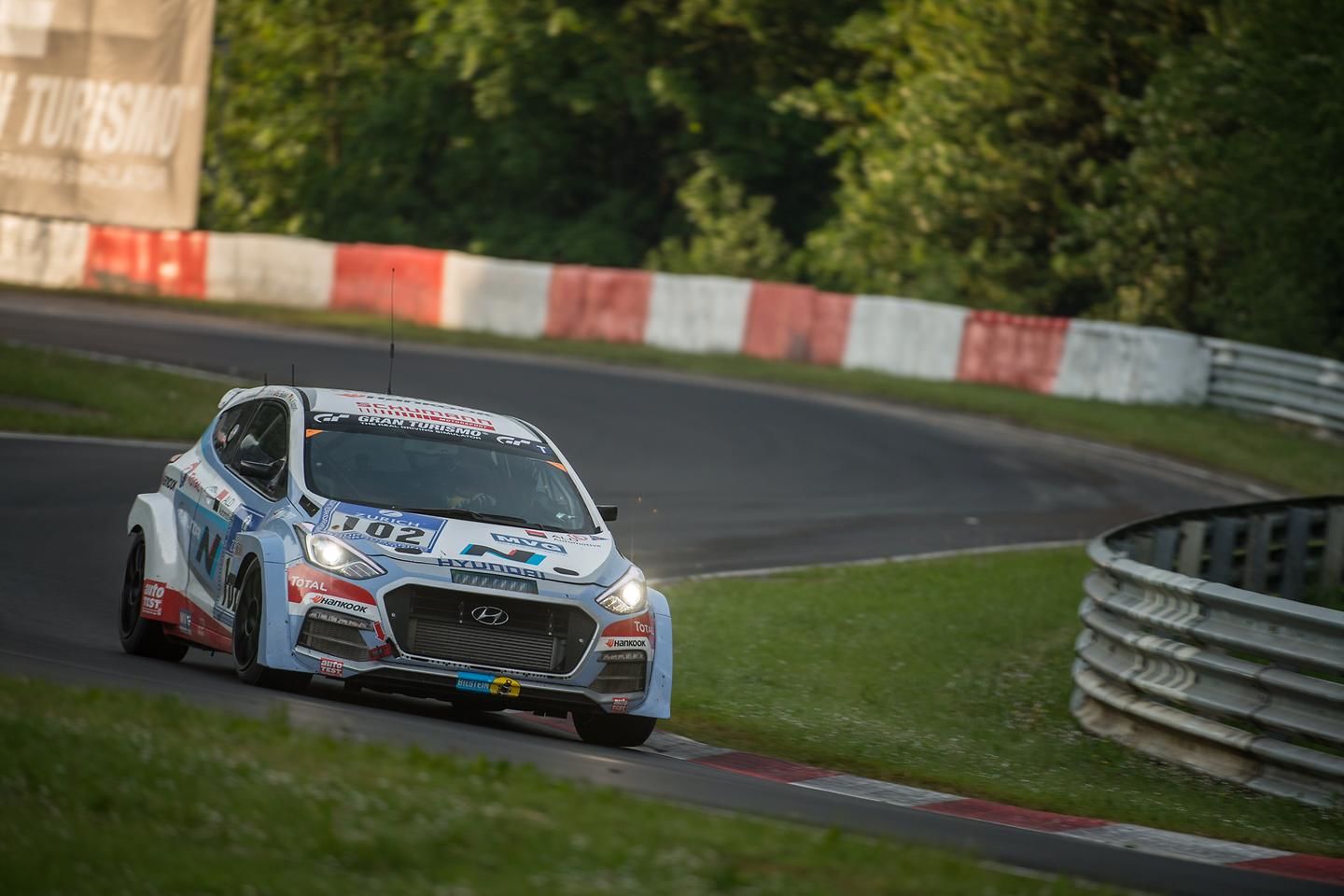 Hyundai Motor Builds on Nürburgring 24h Race for
Further Development of a Future High-Performance Engine
• Hyundai Motor conducts successful acid test for the i30 2.0 Turbo at the Nürburgring
• Motor racing experience will be integrated in the mass production of future high-performance vehicles
• Development car i30 2.0 Turbo as well as two production-car-based models i30 1.6 Turbo and Veloster make it to the chequered flag
May 30, 2016 –Hyundai Motor’s development car i30 2.0 Turbo met all expectations at its first motor-racing appearance in the Nürburgring 24h Race at the legendary Nordschleife. The race at one of the most demanding racetracks in the world served as an intense test for the new, performance-orientated engine that will be applied to the first N model.
“The endurance race at the Nürburgring is the toughest race in the world. It’s the perfect environment for testing the resilience of our new turbo-charged two-litre engine with direct fuel injection under extreme strain,” said Albert Biermann, Head of Vehicle Test & High Performance Development.
The newly designed turbo-charge engine, which is the heart of the development vehicle, coped with the strains of the 24h Race. This is an important finding for Hyundai Motor and the development of future high-performance engines.
“We are on a very good way regarding the design of our first N vehicle. In the process of designing high-performance engines, the highest possible horsepower output is not the top priority. Instead, the engineers focus on maximum driving pleasure and driving fun without compromising the every-day-usability,” added Albert Biermann.
Many components of Hyundai i30 2.0 Turbo were changed to run at the Nordschleife. Components such as the engine, the adapted suspension and shock absorbers were enhanced as well as improvement in other areas such as wheels, steering, fender extensions and safety components were made for motor racing.
In addition to the important findings that will be incorporated in the design of future Hyundai engines, the race also proved to be a major success from the motor racing point of view. The i30 2.0 Turbo outpaced quite a number of the other 159 cars that contested the endurance classic. The development vehicle took the chequered flag after 24 hours in 90th position in the overall rankings. Altogether, the drivers Bruno Beulen (BE), Michael Bohrer (DE), Alexander Köppen (DE) and Rory Pentinnen (FI) completed 91 laps at the gruelling racetrack, representing a distance of 2,309.39 kilometres at racing speed and recording the fastest lap time of 9:55.636 minutes, which even broke the 10-minute barrier.
The development vehicle that contested the Nürburgring 24h Race was designed and built by Hyundai Motor dealer and racing-car constructor Peter Schumann. The racing cars successfully run by Hyundai Motor Deutschland also were developed, designed and built by the Schumann motorsport department.
Over 185,000 people gathered to watch the Nürburgring 24h Race. About 12,000 people were at the ‘Hyundai N Fan Arena’ to cheer for the Hyundai cars. The three Hyundai cars that contested the 24 Race all completed the race with the Veloster 1.6 Turbo ranking first in its class.
-Ends-
About Hyundai Motor
Established in 1967, Hyundai Motor Company is committed to becoming a lifetime partner in automobiles and beyond. The company leads the Hyundai Motor Group, an innovative business structure capable of circulating resources from molten iron to finished cars. Hyundai Motor has eight manufacturing bases and seven design & technical centers worldwide and in 2015 sold 4.96 million vehicles globally. With more than 110,000 employees worldwide, Hyundai Motor continues to enhance its product line-up with localized models and strives to strengthen its leadership in clean technology, starting with the world’s first mass-produced hydrogen-powered vehicle, ix35 Fuel Cell and IONIQ, the world’s first model with three electrified powertrains in a single body type.
More information about Hyundai Motor and its products can be found at:
http://worldwide.hyundai.com or http://globalpr.hyundai.com/