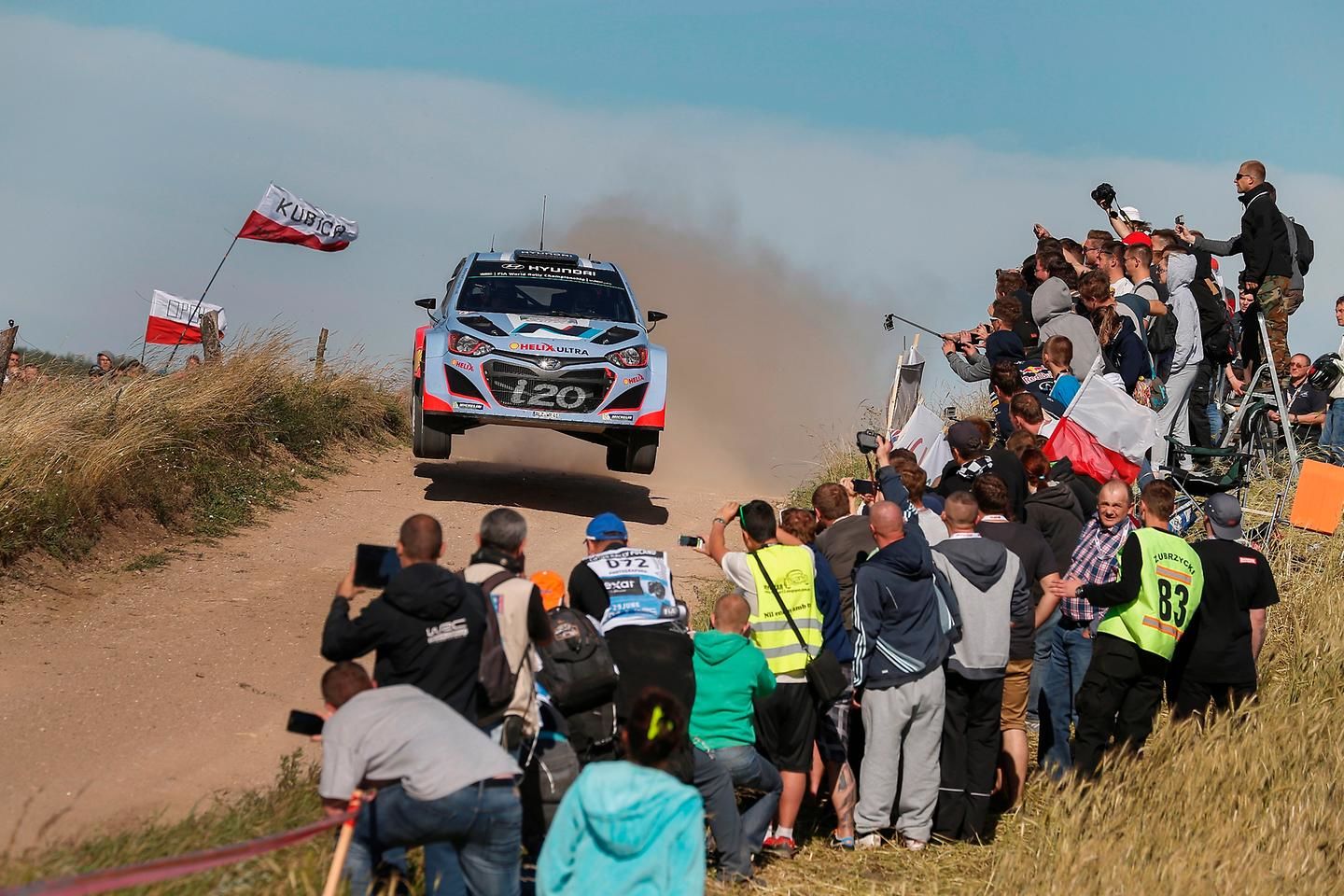 • A competitive performance in Poland in 2014 led to a podium finish, a result that the team hopes to repeat in this year’s re-profiled Rally Poland.

June 26, 2015 - Fresh from a double podium result at the last rally in Sardinia, Hyundai Motorsport hopes to continue its podium pace at next weekend’s Rally Poland as it fields four Hyundai i20 WRC cars for the first time.


The Alzenau-based squad secured a Polish podium with Thierry Neuville winning third place last year. With all new stages and the addition of the fourth car, driven by Dutchman Kevin Abbring, the team will face new challenges at this seventh round of the 2015 FIA World Rally Championship (WRC).


Thierry Neuville and Dani Sordo will continue to fly the flag for the Hyundai Shell World Rally Team in Poland, driving the #7 and #8 cars respectively. Star of Rally Italia Sardegna, Hayden Paddon will once again spearhead the entry for Hyundai Mobis Rally Team in the #20 car but will be joined by Abbring for the first of four events in the #10 Hyundai i20 WRC.


Rally Poland will have a different look for this year’s event with all 19 stages held on Polish ground. The Mikolajki Arena stage will be run three times and is the only stage that is the same as those contested twelve months ago. The high-speed characteristics of the rally will remain, with sand covered gravel, tall roadside grass and hidden rocks all posing challenges to the drivers. Tyre selection will once again be a key factor in performance with soft compounds expected to be the primary choice.


Hyundai Motorsport carried out a test last month with Neuville, Sordo and Paddon in order to best prepare for the rigours of this rally. The #7 and #8 cars will also have a new camshaft for Poland, which the team expects to deliver another step in terms of overall performance.


Team Principal Michel Nandan said: “Rally Poland will be another important milestone for Hyundai Motorsport as we enter four cars into a WRC event for the first time. It will be a new challenge for our team as we tackle an already tricky rally with an extra car, but it’s something to which we are looking forward. We had a fantastic result in Sardinia with two cars on the podium after great performances from all drivers over the weekend, and especially from Hayden. We are pleased to welcome Kevin into the team for a four-rally programme starting from Poland, where we took a JWRC victory some years ago. Our drivers generally perform well on unknown terrain so the fact that around 90% of Rally Poland is new compared to last year will hopefully play into our hands. It would be great to repeat the podium from last year and continue our performance from Sardinia.”


Third place in Sardinia will provide a timely boost for Neuville (#7 Hyundai i20 WRC) as he looks to repeat the performance shown in last year’s Rally Poland.


Neuville said: “We have good memories from last year’s Rally Poland where we finished on the podium in third place and took some fastest stage times as well. I really enjoy the fast, flowing nature of the Polish stages. We were surprised to take a podium in Sardinia after the weekend we had but it was a great result for the team overall and I hope we can build on that in Poland.”


Sordo (#8 Hyundai i20 WRC) only competed in the recce of last year’s Rally Poland but the new composition of the Polish stages will hopefully help minimise any disadvantage to his rivals.


Sordo said: “I only took part in the recce for last year’s Rally Poland so this will be my first time driving the Hyundai i20 WRC in the actual event. It’s difficult to know what to expect because a lot of the stages will also be new, but we will have fast roads, similar to Finland but with gravel and narrower. The team was strong in Poland last year and we had a positive Sardinia rally so I hope we can continue in the same way next week. It should be a fun rally.”


Paddon (#20 Hyundai i20 WRC) was among the standout performers in Sardinia, as he led much of the rally and took his maiden WRC podium. He is keeping his feet on the ground for Poland.


Paddon said: “Sardinia was a great result but we won’t get carried away. We have to take each rally as it comes and keep focused on the job in hand. Poland is quite nice, similar in places to Finland - fast, flowing and with a lot of crests. It is softer and sandier, though, so can become quite rutted on the second pass. The stages are nice and suit my driving style so I’m looking forward to getting back out there and seeing what we can do.”


Dutchman Abbring (#10 Hyundai i20 WRC) made his first appearance for Hyundai Motorsport in Rally Sweden but Poland will mark the first of four programmed rallies for the promising youngster.


Abbring said: “Although I took part in Sweden, those were special circumstances and Poland will be the first of my four-rally programme this season. I took a JWRC win there in 2009; it’s a very fast, sandy rally with narrow bits in the forest. The fast roads over crests are really nice. It’s my first gravel event in a WRC car and I’m still getting used to the car so it will be important to get the pace notes right and to build up a rhythm. It’ll be good to see four cars lined up in our service park and I hope to show everyone what I’m capable of.”


The rally will once again be based in Mikolajki, which will host the service park and the Super Special Stage on Thursday. Friday will see over 150km of action - almost half of the entire SS distance for the rally - with Poland’s longest ever stage, 39.12km Stanczyki. There will be no midday service adding a layer of complexity to proceedings on the first opening day.  Saturday’s stages run closer to the service park but will be no less unforgiving. The 14.6km Baranowo stage brings the event to a close on Sunday morning, with the stage run twice - once as the Power Stage.