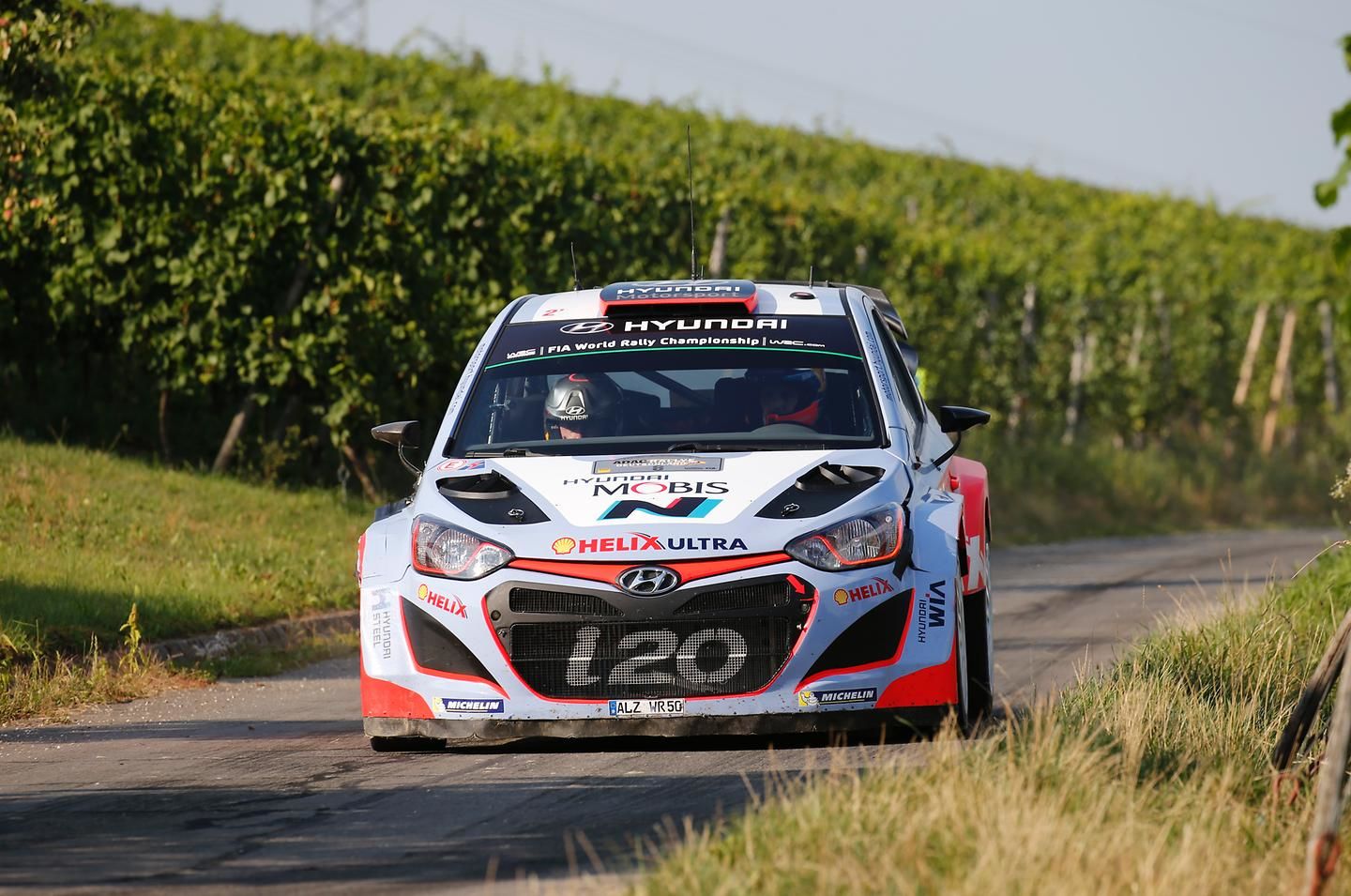 • Hyundai Motorsport has completed Rallye Deutschland with two cars inside the top-five, helping the team reclaim second place in the Manufacturers’ Championship
• Dani Sordo was the highest placed of the team’s drivers in fourth with Thierry Neuville right behind in fifth place overall
• Hayden Paddon and Kevin Abbring finished their weekend of learning on a positive note and registered a solid finish with ninth and 11th positions respectively.


August 24, 2015 - Hyundai Motorsport has reclaimed second place in the FIA World Rally Championship (WRC) Manufacturers’ standings after a competitive Rallye Deutschland in Germany with two Hyundai i20 WRCs inside the top-five overall and all four cars successfully completing the rally on last Sunday.

The team finished the ninth round of the 2015 WRC season from August 20 to August 23 which was held in Trier, Germany. With the sole objective of securing strong points-scoring positions, Hyundai Motorsport drivers achieved their targets with a steady run to the end of the last Power Stage.

Sordo (#8 Hyundai i20 WRC) was on competitive form from the outset of the weekend’s rally and has been involved in an exciting battle for fourth place with his team-mate Neuville.

Sordo commented: “It has been a positive rally for me, and I am really happy to finish in a competitive fourth position with a Power Stage point as well. The car has been very nice to drive, especially today, and I don’t think we could have done much more. We took things calmly because it was very clear that our target - both for Thierry and myself - was to secure the top-five positions and to pick up important championship points. We have managed to move back into second place in the Manufacturers’ standings, which is great in our home event. I’d like to say congratulations also to Thierry, he has also had a very strong rally.”

Neuville (#7 Hyundai i20 WRC) has had a positive and generally trouble-free Rallye Deutschland with a fine run to fifth overall, which has helped the Belgian and his co-driver Nicolas Gilsoul to strengthen their own Championship position.

Neuville said: “All in all, I think we can be very pleased with our weekend in Germany. The target was to bring the car home safely in the top five and we have been able to do that without any difficulties. It was fun to be in the fight with Dani for fourth place. I had a couple of stages where the rhythm was not perfect and where Dani was stronger, and that made the difference, so he deserved it. As a team, we have a nice result for the Championship, which is the most important thing. We can now look to build on this performance for the next rallies and, hopefully, we can consolidate this position.”

Rallye Deutschland has offered Paddon (#20 Hyundai i20 WRC) an opportunity to learn more about competing on tarmac, a terrain on which he is less familiar.

Paddon said: “It’s definitely been tough for us last weekend. We knew coming into the rally that we’d have to lower our expectations a bit because we still have a lot to learn on tarmac. We’ve had some ups and downs but there are some good things to take away from the event. We have accumulated a lot of data and information, which we can study back at home to see what we have to work on for the future.

In only their third WRC event with Hyundai Motorsport, Abbring (#10 Hyundai i20 WRC) and co-driver Sebastian Marshall have made good progress, finishing Rallye Deutschland just outside the top-ten.

Abbring commented: “This rally has been an interesting one for us and a valuable experience. The car felt good in final stages and we were able to really enjoy ourselves. It’s been astonishing how many Dutch flags and spectators from Holland there have been here - I’ve really appreciated the fantastic support as a Dutch.”

Hyundai Motorsport has achieved its target of a strong points haul in Rallye Deutschland, a home event for the Alzenau based squad. The result has moved the team back into second in the Manufacturers’ Championship, a position the team aims to defend in the remaining events of 2015.

Team Principal Michel Nandan said: “We have achieved what we set out to accomplish in Rallye Deutschland so I’m very satisfied with this result. The drivers have performed well and truly worked as a team to secure a four-car finish with two cars inside the top-five. We have moved back into second place in the Championship and we must now build on this momentum to consolidate that in the next rounds. Dani and Thierry have both been on competitive form, as we knew they would be, but have shown a sensible approach to the rally to get both cars home in the top-five. For Hayden and Kevin, it has been a weekend of learning. We have also had to deal with some small technical issues but overall it has been a useful weekend for them both, and I commend their professionalism. It has been another enjoyable home event for our team and although we have not been able to fight for a podium, we were actually not too far off at the end. We will continue to push ourselves to close the gap to the frontrunners.”